I wish to acknowledge the receipt of your favor of March 11, and thank you for calling my attention to the matter of the “electrolytic current interrupter.” Pressing work has for the past few weeks claimed all my time, and I have been unable to peruse the technical periodicals, and it is only a few days ago that I noticed an article descriptive of the device. Upon receiving your note I have gone over the journals and have read the articles and comments that have appeared. Most of them are indicative of time ill-spent for the purpose of comprehending the requirements of such an apparatus.

To stimulate the ardor of the zealous experimenters, who believe in the revolutionary character of this discovery, it might be well to suggest one or two such simple devices for interrupting the current. For instance, a very primitive contrivance of this kind comprises a poker — yes, an ordinary poker, connected by means of a flexible cable to one of the mains of the generator, and a bathtub filled with conducting fluid which is connected in any suitable manner, through the primary of an induction coil, to the other pole of the generator. When the experimenter desires to take a Roentgen picture, he brings the end of the poker to white heat, and, thrusting the same into the bathtub, he will at once witness an astonishing phenomenon; the seething and boiling liquid making and breaking the current in rapid succession, and the powerful rays generated will at once convince him of the great practical value of this discovery. I might further suggest that the poker may be conveniently heated by means of a welding machine.

Another device, entirely automatic, and probably suitable for use in suburban districts, comprises two insulated metal plates, supported in any convenient manner, in close proximity to each other. These plates are connected through the primary of an induction coil with the terminals of a generator, and are bridged by two movable contacts joined by a flexible cable. The two contacts are both attached to the legs of a good-sized chicken standing astride on the plates. Heat being applied to the latter, muscular contractions are produced in the legs of the chicken, which thus makes and breaks the current through the induction coil. Any number, of such chickens may be provided and the contacts connected in series or multiple arc, as may be desired, thus, increasing the frequency of the impulses. In this manner fierce sparks, suitable for most purposes, may be obtained, and vacuum tubes may be operated, and these contrivances will be found a notable improvement on certain circuit-breakers of old, with which two enterprising editors undertook some years ago to revolutionize the systems of electric lighting. The enterprising editors, are wiser now. They are to be congratulated, and their readers, scientific societies and the profession, all ought to be congratulated, and — “all is well that ends well.” The observant experimenter will not fail to note that the fierce sparks frighten the chickens, which are thus put into more violent spasms and muscular contractions, this again increasing the fierceness of the sparks, which, in return, causes a greater fright of the chickens and increased speed of interruptions; it is, in fact, as Kipling says:

“Interdependence absolute, foreseen, ordained, decreed,
To work, ye’ll note, as any tilt an’ every rate o’speed.”

But to return, in all earnestness, to the “electrolytic interrupter” described, this is a device with which I am perfectly familiar, having carried on extensive experiments with the same two or three years ago. It was one of many devices which I invented in my efforts to produce an economical contrivance of this kind. The name is really not appropriate, inasmuch as any fluid, either conducting or made so in any manner, as by being rendered acid or alkaline, or by being heated, may be used. I have even found it possible, under certain conditions, to operate with mercury. The device is extremely simple, but the great waste of energy attendant upon its operation and certain other defects make it entirely unsuitable for any valuable, practical purpose, and as far as those instances are concerned, in which a small amount of energy is needed, much better results are obtained by a properly designed mechanical circuit-breaker. The experimenters are very likely deceived by finding that an induction coil gives longer sparks when this device is inserted in place of the ordinary break, but this is due merely to the fact that the break is not properly designed. Of the total energy supplied from the mains, scarcely one-fourth is obtainable of that amount, which a well constructed mechanical break furnishes in the secondary, and although I have designed many improved forms, I have found it impossible to increase materially the economy. Two improvements, however, which I found at that time necessary to introduce, I may mention for the benefit of those who are using the device. As will be readily noted, the small terminal is surrounded by a gaseous bubble, in which the makes and breaks are formed, generally in an irregular manner, by the liquid being driven towards the terminal at some point. The force which drives the liquid is evidently the pressure of the fluid column, and by increasing the fluid pressure in any manner the liquid is forced with greater speed towards the terminal and thus the frequency is increased. Another necessary improvement was to make a provision for preventing the acid or alkali from being carried off into the atmosphere, which always happens more or less, even if the liquid column be of some height. During my early experiments with the device, I became so interested in it that I neglected this precaution, and I noted that the acid had attacked all the apparatus in my laboratory. The experimenter will conveniently carry out both of these improvements by taking a long glass tube of, say, six to eight feet in length, and arranging the interrupting device close to the bottom of the tube, with an outlet for eventually replacing the liquid. The high column will prevent the fumes from vitiating the atmosphere of the room, and the increased pressure will add materially to the effectiveness of the performance. If the liquid column be, say, nine times as high, the force driving the fluid towards the contact is nine times as great, and this force is capable, under the same conditions, of driving the fluid three times as fast, hence the frequency is increased in that ratio and, in fact, in a somewhat greater ratio, as the gaseous bubble, being compressed, is rendered smaller, and therefore the liquid is made to travel through a smaller distance. The electrode, of course, should be very small to insure the regularity of operation, and it is not necessary to use platinum. The pressure may, however, be increased in other ways, and I have obtained some results of interest, in experiments of this kind.

As before stated, the device is very wasteful, and, while it, may be used in some instances, I consider it of little or no practical value. It will please me to be convinced of the contrary; but I do not think that I am erring. My chief reasons for this statement are that there are many other ways in which by far better results are obtainable with are equally simple, if not more so. I may mention one here, based on a different principle which is incomparably more effective, more efficient and also simpler on the whole. It comprises a fine stream of conducting fluid which is made to issue, with any desired speed, from an orifice connected with one pole of a generator, through the primary of the induction coil, against the other terminal of the generator placed at a small distance. This device gives discharges of a remarkable suddenness, and the frequency may be brought within reasonable limits, almost to anything desired. I have used this device for a long time in connection with ordinary coils and in a form of my own coil with results greatly superior in every respect to those obtainable with the form of device discussed.

If time permits I shall, in compliance with the request expressed in your letter, make a few statements referring to such make and break devices in general, and various forms based on this new principle. 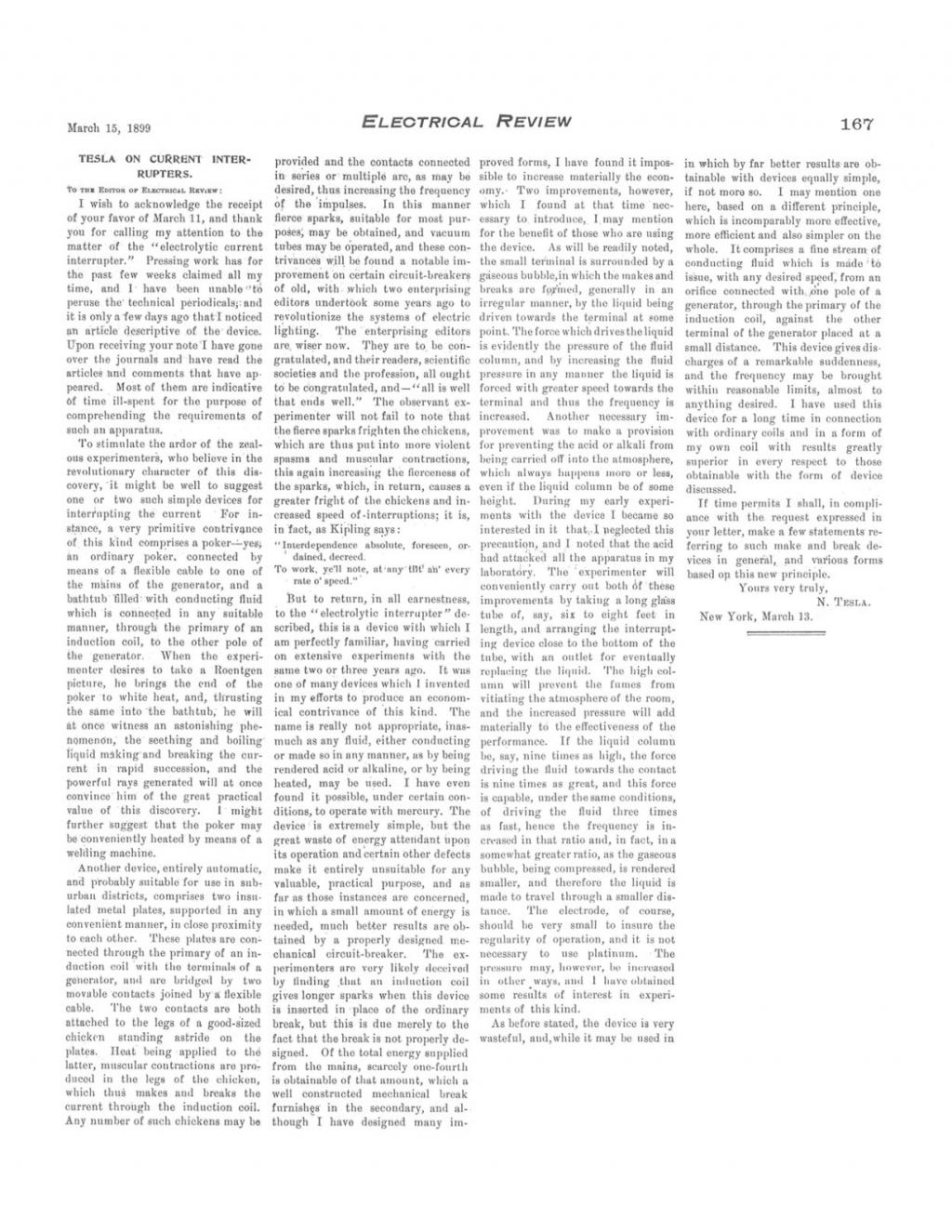