The Physiological and Other Effects of High Frequency Currents

In The Electrical Engineer of January 25, 1893, I note an article by Mr. A. A. C. Swinton, referring to my experiments with high frequency currents. Mr. Swinton uses in these experiments the method of converting described by me in my paper before the American Institute of Electrical Engineers, in May, 1891, and published in The Electrical Engineer of July 8, 1891, which has since been employed by a number of experimenters; but it has somewhat surprised me to observe that he makes use of an ordinary vibrating contact-breaker, whereas he could have employed the much simpler method of converting continuous currents into alternating currents of any frequency which was shown by me two years ago. This method does not involve the employment of any moving parts, and allows the experimenter to vary the frequency at will by simple adjustments. I had thought that most electricians were at present familiar with this mode of conversion which possesses many beautiful features.

The effects observed by Mr. Swinton are not new to me and they might have been anticipated by those who have carefully read what I have written on the subject. But I cannot agree with some of the views expressed by him.

First of all, in regard to the physiological effects. I have made a clear statement at the beginning of my published studies, and my continued experience with these currents has only further strengthened me in the opinion then expressed. I stated in my paper, before mentioned, that it is an undeniable fact that currents of very high frequency are less injurious than the low frequency currents, but I have also taken care to prevent the idea from gaining ground that these currents are absolutely harmless, as will be evident from the following quotation: “If received directly from a machine or from a secondary of low resistance, they (high frequency currents) produce more or less powerful effects, and may cause serious injury, especially when used in conjunction with condensers.” This refers to currents of ordinary potential differences such as are used in general commercial practice.

As regards the currents of very high potential differences, which were employed in my experiments, I have never considered the current’s strength, but the energy which the human body was capable of receiving without injury, and I have expressed this quite clearly on more than one occasion. For instance, I stated that “the higher the frequency the greater the amount of electrical energy which may be passed through the body without serious discomfort.” And on another occasion when a high tension coil was short-circuited though the body of the experimenter I stated that the immunity was due to the fact that less energy was available externally to the coil when the experimenter’s body joined the terminals. This is practically what Mr. Swinton expresses in another way; namely, by saying that with “high frequency currents it is possible to obtain effects with exceedingly small currents,” etc.

In regard to the experiments with lamp filaments, I have, I believe, expressed myself with equal clearness. I have pointed out come phenomena of impedance which at that time (1891) were considered very striking, and I have also pointed out the great importance of the rarefied gas surrounding the filament when we have to deal with currents of such high frequency. The heating of the filament by a comparatively small current is not, as Mr. Swinton thinks, due to its impedance or increased ohmic resistance, but principally to the presence of rarefied gas in the bulb. Ample evidence of the truth of this can be obtained in very many experiments, and to cite them would be merely lengthening this communication unduly.

Likewise, observations made when the experimenter’s body was included in the path of the discharge, are, in my opinion, not impedance, but capacity, phenomena. The spark between the hands is the shorter, the larger the surface of the body, and no spark whatever would be obtained if the surface of the body were sufficiently large.

I would here point out that one is apt to fall into the error of supposing that the spark which is produced between two points on a conductor, not very distant from each other, is due to the impedance of the conductor. This is certainly the case when the current is of considerable strength, as for instance when,like in the Faraday experiment or some of Dr. Lodge’s, a heavily-charged battery of Leyden jars is discharged through a bent wire. But, when there is a vibration along a wire which is constantly maintained, and the current is inappreciable whereas the potential at the coil terminal is exceedingly high, then lateral dissipation comes into play prominently. There is then, owing to this dissipation, a rapid fall of potential along the wire and high potential differences may exist between points only a short distance apart. This is of course not to be confounded with those differences of potential observed between points when there are fixed waves with ventral and nodal points maintained on a conductor. The lateral dissipation, and not the skin effect, is, I think, the reason why so great an amount of energy may be passed into the body of a person without causing discomfort.

It always affords me great pleasure to note, that something which I have suggested is being employed for some instructive or practical purpose; but I may be pardoned for mentionting that other observations made by Mr. Swinton, and by other experimenters, have recently been brought forward as novel, and arrangements of apparatus which I have suggested have been used repeatedly by some who apparently are in complete ignorance of what I have done in this direction. 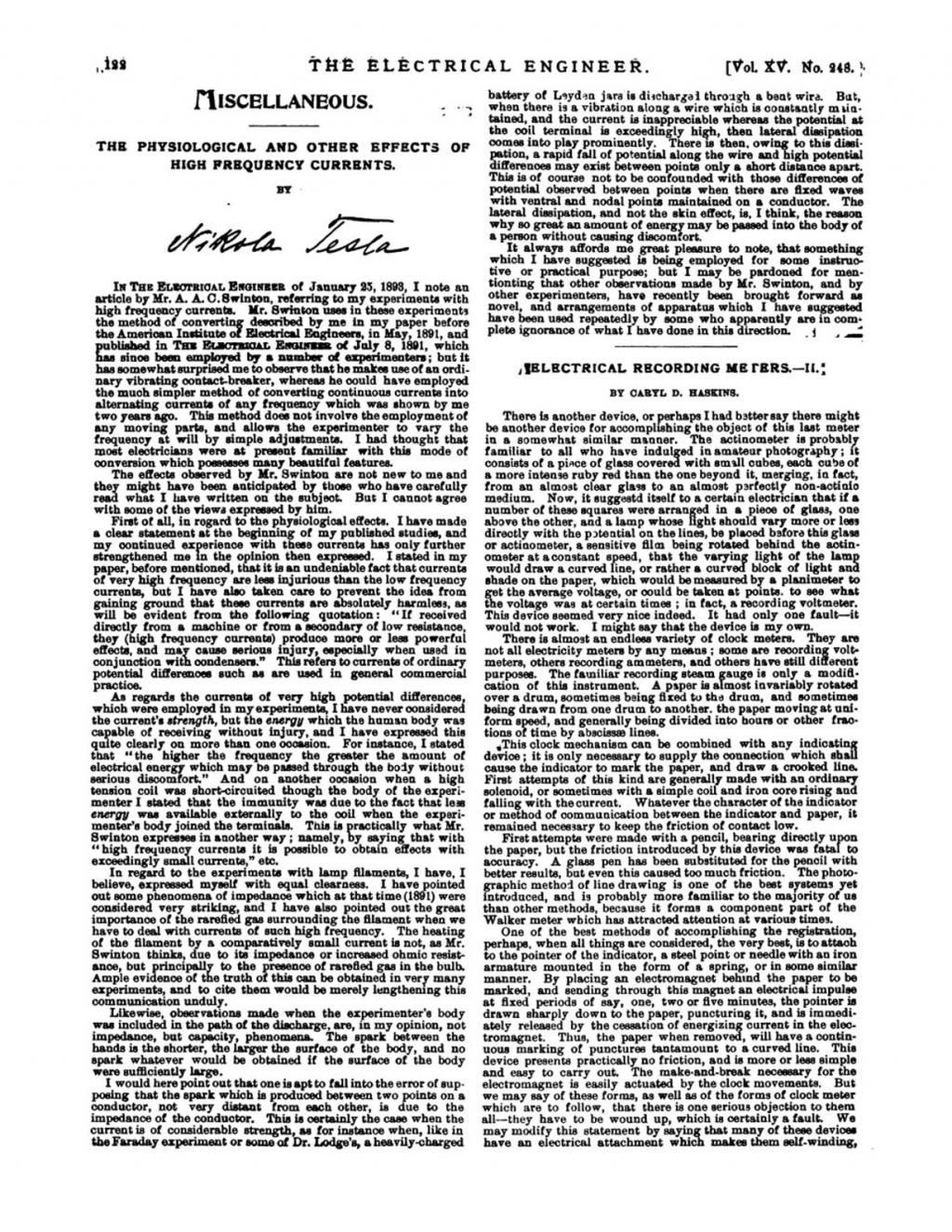