The interesting account of the novel experiments given by Mr. Nikola Tesla in the Electrical World of Feb. 21, 1891, and relating to the phenomena of alternating currents of very high frequency, lead me to make a statement of some of my own observations while working in similar directions. The highest number of alternations which I have had at my disposal up to the present have been 8,000 to the second, a rate somewhat below that which Mr. Tesla has obtained, but which, nevertheless, shows properties and brings about actions and results similar to those which he described. The physiological actions of these rapidly alternating currents have been very ably investigated by Dr. Edward Tatum, some of the results of whose work I have presented in a separate communication.

Mr. Tesla’s experiences in relation to the static effects of these currents of high frequency are similar to those noted by myself, particularly the small surface of the condenser which is able to transfer, or permit to be transferred, a considerable amount of energy through a dielectric, owing to the exceedingly high rate at which the changes of direction of charge are made.

The following experiment which was tried by me some months ago, is interesting in this connection. An incandescent lamp bulb was constructed, in which only a single platinum leading-in wire was used, on the end of which, inside the bulb, was mounted a single slip of carbon, two or three inches in length, it being one leg of a broken incandescent lamp filament. Two-thirds of the lamp bulb was now immersed in an outer vessel of water, leaving the single wire above the water for attachment to the source of alternating currents at one terminal, and the other terminal was connected with the outside water, which was rendered slightly conducting by salt dissolved therein. The water surrounding the lamp bulb formed, of course, an outer condenser coating, while the vacuous space and straight slip of carbon were the means for the conveyance of a charge to and from the inside surface of the bulb, which was, of course, exhausted to the ordinary vacuous condition, as found in an incandescent lamp. When an alternating potential of about 1,000 volts, and with a rate of alternations up to 5,000 per second, was applied to the carbon strip, the filament was brought to bright incandescence simply by the bombarding action of the residual gas, as in the Crookes tubes, while, of course, no complete circuit existed, the condenser action of the lamp bulb allowing sufficient current to flow. At the same time the glass of the lamp bulb not immersed in the water, became rapidly heated, indicating that that portion which was immersed in the water would have become equally heated had it not been subjected to the cooling action of the water itself.

The retention of the arc, as with direct currents, and the high note evolved by it, have been noted from the beginning of my experiments with these high period currents. Mr. Tesla expresses surprise that he was enabled to hear the note from an arc in which the alternations of current were more than 10,000 per second. Mr.Tesla will pardon me for calling his attention to the fact that he is taking as the limit of audition in this case sounds from 5,000 to 10,000 complete waves per second, which is far below the limit at which sounds become inaudible to ordinary ears, cases existing in which a pitch corresponding to over 30,000 per second has been heard, according to some authorities.

The cause of the persistence of the arc with very high period alternations as stated by Mr. Tesla is undoubtedly the correct one, i. e., that the gas stream has no time to cool between the alternations, and its variations of temperature must therefore be quite slight. The conductivity of the vapor or gas stream constituting the arc therefore remains nearly constant when the rapidity of alternations is sufficiently great.

The characteristics, stated by Mr. Tesla, as requisite to be possessed by machines suitable for obtaining constant current for the working of arc lights, are of course connected with the fact that in such machines the characteristic curve indicates a drop or fall in the electromotive force developed on a slight excess of current above the normal and, on a decrease of current, a raising of the electromotive force to a point above the normal.

It is not, however, in accordance with my experience, that the undulation of the current is almost essential to the success of an arc light system, nor do I think that properly constructed clutch lamps depend for their success any more than do finely constructed clockwork lamps, on the presence of a rapidly varying current due to a small number of armature coils and correspondingly small number of segments in the commutator. In fact, I have run with perfect success clutch lamps in circuit with coils of such large self-induction that any but very slight fluctuations were wiped out, and without introducing any particular difference in the behavior of the lamps. It probably is true, however, that slight gentle fluctuations occurring at very moderate intervals may be of benefit in the working of clutch lamps by keeping, as it were, the clutch mechanism in a state of vibration or tendency to open or close, but it can scarcely be doubted that if this benefit exists for such lamps a similar benefit would exist on the operation of clockwork lamps, as a similar fluctuation would give rise to a continual tendency in such lamps to keep the detent or escapement free enough for delicately letting-go teeth for the feed; but the fact that large numbers of lamps are in use in which the feeding of the carbon, either by clutch or by clockwork, is under the control of a derived circuit magnet only, and that such lamps operate with the greatest satisfaction, shows that the undulations mentioned by Mr. Tesla are not necessarily a factor to be considered. In such cases the self-induction of the arc branch is negligible as compared with that of the derived circuit magnet controlling mechanism, and the fluctuations therefore would pass through the arc without affecting the said magnet to a perceptible degree, particularly as the potential around the normal arc with slightly different current strengths flowing is nearly constant.

I may add that the experiments of Mr. Tesla in relation to the action of the condenser and the elevation of potential brought about by it are decidedly interesting and point to the possibility of obtaining a pure resonance effect. This would require, however, that the periodicity of the alternations be preserved very rigidly during the experiments, and involves the production of an unvarying or perfectly constant speed in driving the generating machine, a condition not easily obtained in practice.

In making the above notes on the highly interesting and valuable account given by Mr. Tesla, I desire to state that in whatever way my notes may appear as criticism of Mr. Tesla’s views, they are not made in any unfriendly spirit, but with the desire of reaching the exact facts which it is the object of scientific investigation and discussion to ascertain. 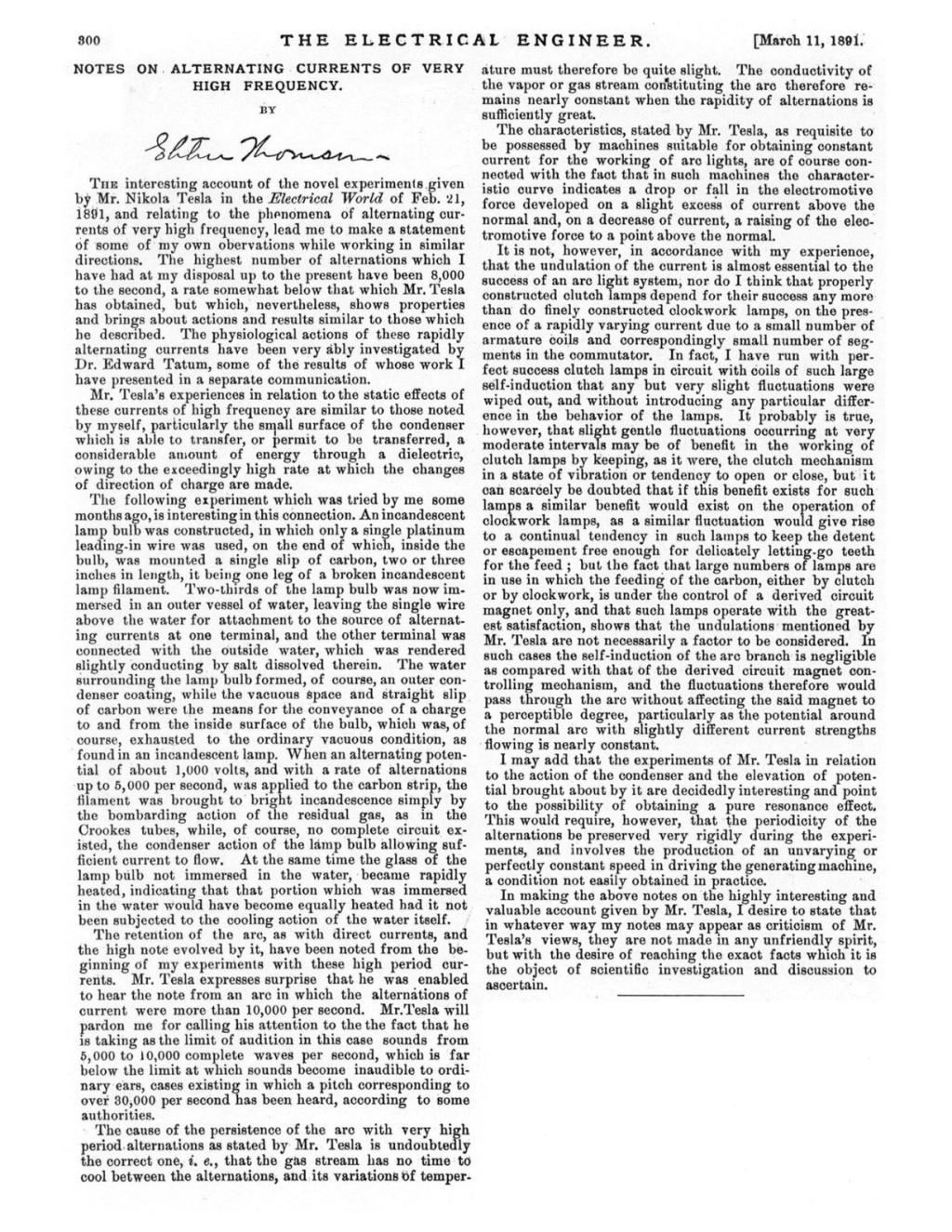