Tesla Has Plans to Signal Mars

Nikola Tesla is 81 years old. Some reference books, including “Who’s Who” fix the year of his birth at 1867. He does not know whether the anniversary should have been celebrated Friday or, as it was, on Saturday, because it was just at midnight between July 9 and July 10 that he was born. But the year was 1856.

It was a most unusual birthday party the inventor held at the Hotel New Yorker, where he makes his residence. For the Ministers of his native Jugoslavia and neighboring Czechoslovakia and their staffs, and a handful of newspaper men, Dr. Tesla had provided a most unusual material and mental feast.

Figuratively, at least, they are still smacking their lips today over the food and wines and speculating about what may come from the discoveries the scientist announced, his quest for the French Academy prize for interplanetary communication, the perfection of a tube to carry immense electrical voltages, and some of the more abstract observations regarding cosmic rays and what makes this universe of ours expand and contract, oscillating instead of always expanding as some physicists hold.

Considering his years and the fact that recently he was the victim of an automobile accident which shook his system seriously, Dr. Tesla is exceedingly vigorous. His thinning hair, although predominantly white, still has considerable black. His eyes are as keen and penetrating as ever. He speaks distinctly although, of course, with a bit of the accent he has always had. But he picked up questions quickly and answered them in a manner that showed a tremendous grasp of all the latest theories of the astronomers, physicists and other scientists.

In recent years Dr. Tesla has made a habit of announcing on his birthdays some of the discoveries he has made in the past year; and he feels that with the passing of the years they have increased in importance. He said: “The maximum power of man is reached in his age rather than in his prime, as many suppose. Every one should have a decade to sum up the work of his lifetimes after he reaches the age of seventy - five. By then, if he has worked constantly in one field, he has gained so much experience that the solution of problems becomes much easier.”

Everything at the birthday party was designed to lead up to the discussion of the inventor’s latest achievements. Although he tasted only two of the courses and refrained altogether from any drink but water, he treated his guests to the finest in foods and wines.

The piece de resistance was “Canard en casserole a la Tesla” a dish he had planned himself about ten years ago, consisting of duck roasted slowly in a casserole, smothered with whole stalks of celery. It won unstinted praise from the diplomatic representatives.

Dr. Tesla did take just a taste of this dish to make certain that it had been properly prepared and, as a sign of his approval had the chef come in to receive the applause of his guests. The other dish of which he partook was a jellied consomme.

Alcohol, he believes, is a great thing. Whisky and wine are preferable to coffee and tea. As his guests smacked their lips over some of the vintages he had brought forth for the occasion, they were disposed to agree with Dr. Tesla on this point.

It was in the random conversation of the meal that one learned many intimate things about Dr. Tesla. He gave little glimpses of his boyhood life in Jugoslavia. One gathered he had acquired much of his genius from his learned father, a Slavian priest, and his mother, a practical and also a brilliant woman.

When, in 1884, Dr. Tesla landed at the Battery he had just 4 cents. He had only gone a few blocks up Broadway when he saw some men sweating over an electrical machine that had broken down.

“It was a machine I had helped to design, but I did not tell them that. I asked, ‘What is the matter?’ and they said, ‘This thing won’t work.’ I asked, ‘what would you give me if I fix it?’ ‘Twenty dollars’ was the reply. I took off my coat and went to work. I had it running perfectly in an hour and had earned $20.”

He shortly found it was not all so easy as that. There were many days when he did not know where the next meal was coming from. “But I was never afraid to work. I went to where some men were digging a ditch. I said I wanted to work. The boss looked at my good clothes and white hands and he laughed to the others. ‘This man wants to work.’ But he said ‘All right. Spit on your hands. Get in the ditch. Go to work.’ And I worked harder than anybody. At the end of that day I had $2. And I kept it up until I had enough to get started again.”

“Could that happen today?” he was asked. There was a serious pause, a grave frown and he said, “I am afraid not. The present is destructive. The workers are expected to support the bums.”

Before the birthday cake was cut Dr. Tesla was invested with the orders which Jugoslavian and Czechoslovakian ministers had brought. Dr. Constantine Fotitch, Jugoslavian Minister, who was attended by R. Petrovich, first secretary of his legation, and B. F. Stoyanovich, the Consul - General here, bestowed the grand Cordon of the White Eagle in behalf of King Peter.

Dr. Tesla sharply assailed those physicists who contend that cosmic rays originate in far places of the universe where matter is converted into energy. He produced a formula saying “The kinetic and potential energy of a body is the result of motion and determined by the product of its mass and the square of its velocity. Let the mass be reduced, the energy is diminished by the same properties. If it be reduced to zero, the energy is likewise zero for any finite velocity.”

About half of his talk was devoted to abstract scientific problems.

Turning from the more metaphysical aspects of his studies to the practical, Dr. Tesla disclosed his greatest ambition is to be the man who evolved a method of communicating with other planets. He thinks he has found the answer and is preparing to lay its formula before the Institute of France in quest of the Pierre Guzman price of 100,000 francs offered for a means of communicating with other worlds.

The man who accomplishes this, he feels, will be remembered after all present inventions are forgotten. 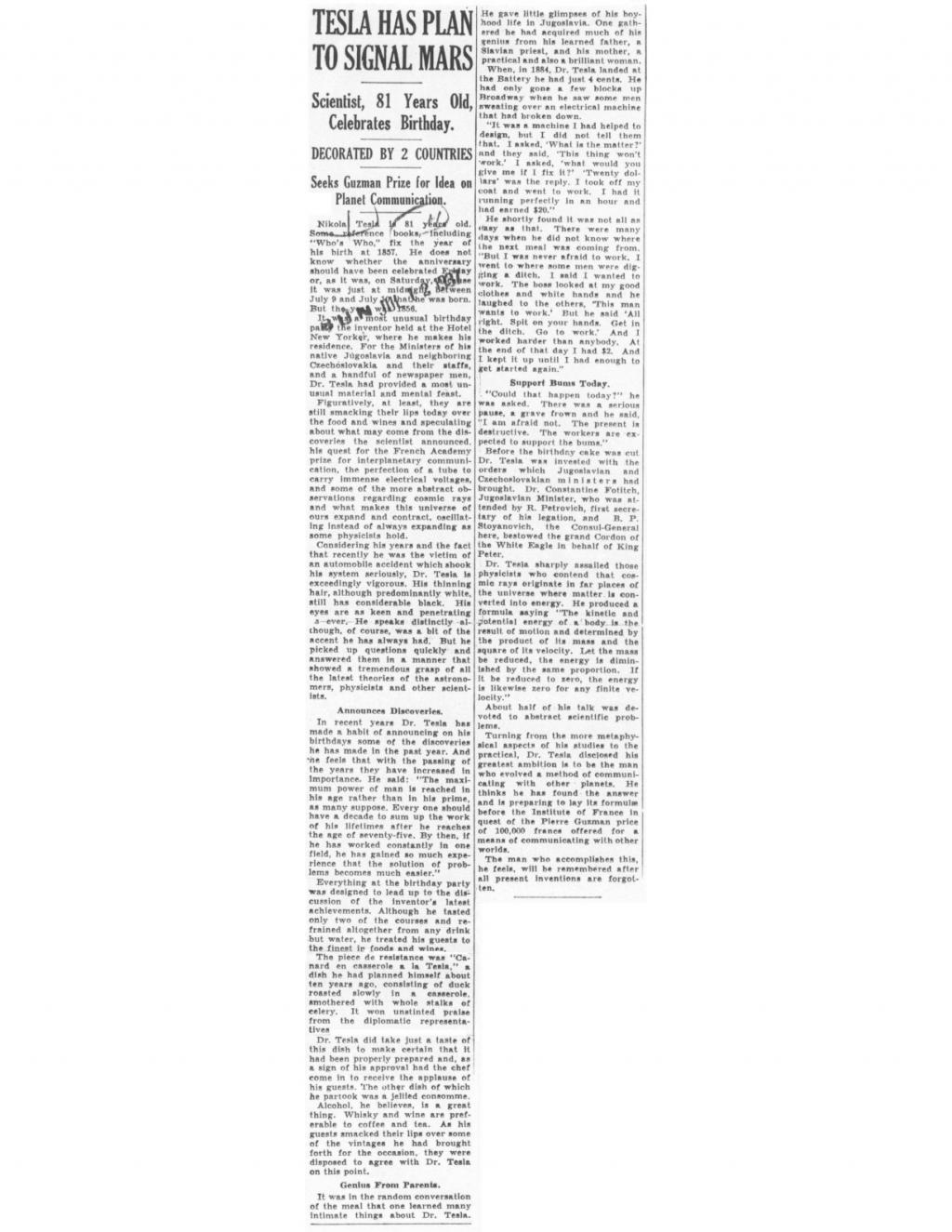