No Explanation of Tesla’s Experiments with 250,000 Volts - Tesla Reluctant to Talk Now, but Already on Record - What Produces Death

Several causes have recently combined to create doubts in the minds of a few intelligent people about the swiftness and certainty with which the death sentence has been executed in New-York State since electricity has been adopted by law as the agent. Occasionally, among the hasty and inadequate reports of accidents to linemen there is an account of a seemingly wonderful escape from death. Then. too, statements which cannot be verified, but which, on the contrary, have been squarely denied, sometimes creep into print, suggesting that at one or two executions death was caused, not by the means which the law prescribes, but by drugs or the surgeon’s knife. Undiscriminating readers are misled by such stories, and perhaps neither see the printed denials nor perceive the interested motives which often inspire these misrepresentations. Moreover, electrical science is not understood as generally as it might be by the public; so that people who are well informed in most other matters might easily be deceived in these. There are, however, in this country two experts in this branch of study who enjoy international fame because of their researches and inventions. The world recognizes no higher living authorities in electrical matters than Thomas A. Edison and Nikola Tesla, and any one who does not feel competent to form an opinion for himself in regard to this subject may perhaps prefer to accept theirs instead.

Mr. Edison was seen yesterday at his charming home in Llewellyn Park, West Orange, N. J. To half a dozen questions about electrical executions he gave characteristically laconic but explicit answers. He spoke without hesitation or evasion and with the earnestness of conviction.

“What do you think, Mr. Edison,” asked the reporter, “about these stories of the resuscitation of criminals after electricity has been employed to inflict the death penalty?”

“Nonsense!” was the emphatic reply.

“Do you consider this method of execution as ‘sure death’?”

“No: the action of the electricity is too rapid for a man to be conscious of it. In this respect its work is instantaneous, although it is customary to prolong the administration of the current for several seconds.”

“What form of current is most deadly, in your judgment?”

“An intermittent one, such as they use in executions. The current flows first one way and then the other, each change producing a shock to the victim which is like iron on an anvil receiving fifty blows a second from a mighty hammer.”

It Requires Amperes to Kill

“No amperes,” was Mr. Edison’s first reply, and then, by way of explanation, he added:

“There are two things to be kept in mind in talking about electrical currents - amperes, or volume, and volts, or pressure. If you use a missile as slender as a knitting needle it will not deliver so heavy a blow as a bar an inch thick flying at the same rate. Unless a current have a certain volume, then, it might have a pressure of 200,000 or even 1,000,000 volts, and yet be comparatively harmless.”

“How many amperes are required to kill?”

“With the pressure used at Sing Sing and Auburn, probably two.”

“What other precautions are necessary?”

“The contacts between the terminals of the wire, or electrodes, and the human body should be good, to insure the passage of the current through the latter. About thirty linemen are killed every year, and these poor fellows usually touch the fatal wire only for a second, are partially protected, perhaps, by their clothing, and often receive a current at a lower voltage than is employed for executions. Yet, even with such poor contacts, see the result! In carrying out the death sentence, pains are taken, not only to have a suitable current and to prolong its administration, but also to see that the contacts are thoroughly made. Great attention is paid to this vital point.”

Mr. Tesla was also requested to discuss these questions with a Tribune reporter last week. But the gifted and enthusiastic inventor declined, courteously but firmly, to talk for publication. The refusal was due, perhaps, to scruples about expressing his ideas, and not to any uncertainty or doubts existing in his own mind. Indeed, it has been learned that in private conversation he has uttered well-defined opinions.

A friend and warm admirer of Mr. Tesla said yesterday to a Tribune reporter: “You must not misunderstand his reserve. He is an exceedingly conscientious as well as obliging fellow. It is well known that some of his most brilliant experiments were undertaken years ago for the sake of demonstrating that alternating currents could be used in such a manner as to render them harmless. And he proved his point, too. Hence it puts him in an embarrassing position to ask him to demonstrate the other side of the question.

“Mr. Tesla very well knows, though,” continued the Tribune’s informant, “what conditions are necessary to make an electric shock certainly and promptly fatal. He lays great stress on having the electrodes, or terminals of the electric current, placed in proper contact with the body. I have myself heard him say: ‘The dry skin is a pretty fair insulator, and may obstruct the passage of the current; but if the two contacts be made with the blood or fluids of the body, no doubt 100 volts, or even less, would lay a man out in an instant He would be killed beyond all hope of resuscitation.’”

In reference to the much-discussed experiment of taking an alternating current through the body with a voltage of 250,000 without harm, Mr. Tesla himself explained to a Tribune reporter two years ago the object and character of that performance. As has been already mentioned, his motive was to show that such currents might be harmless under certain circumstances. And the particular means which he employed to render them innocuous was to increase the frequency of the alternations. In those experiments, by means of specially devised laboratory apparatus, his current was made to oscillate at the astonishing rate of a million vibrations a second, instead of fifty or 100, the ordinary periods. “High frequency” currents have been the subject of extensive investigations by this gentleman, and the world is likely to hear more about his researches in this direction in coming years. Mr. Tesla does not recall, and perhaps did not measure, the volume of his current, but, as Mr. Edison has indicated, he probably had but a fraction of an ampere. Mr. Tesla’s great point is, though, that the total electrical energy (expressed by multiplying the number of amperes into the number of volts) which a person can endure is greater with exceedingly rapid alternations than with the low frequency currents in commercial use.

Experts Report to the Governor

In connection with this point it may not be out of place to recall the report made by two experts, one a physician and the other an electrician, appointed by the Governor at the request of “The Electrical World,” to witness the infliction of the death penalty in the case of David Hampton, at Sing Sing, January 28, 1895. This commission, of which Dr. Augustin H. Coelet and A. E. Kennelly were the members, was selected with a view to setting at rest all doubts about the true cause of death in such cases. Post-mortem examination clearly showed that the blood vessels of a previously healthy brain had been distended and ruptured, and that it was artificial apoplexy, directly produced by the electric current, which killed the man. The commission reported as follows: “The evidence is, therefore, that a current of eight amperes, applied through the body at a pressure of 1,740 volts, will produce instantaneous, painless and absolute death, and that the evidence presented by an examination of the brain alone was sufficient to demonstrate the absolute impossibility of resuscitation.” In cases of accidental contact with high pressure circuits, however, efforts to restore life are recommended because “either from the imperfection of the contact or its short duration the current strength passing through the body, and the electrical energy expended thereby, might only be sufficient to produce a loss of consciousness.” 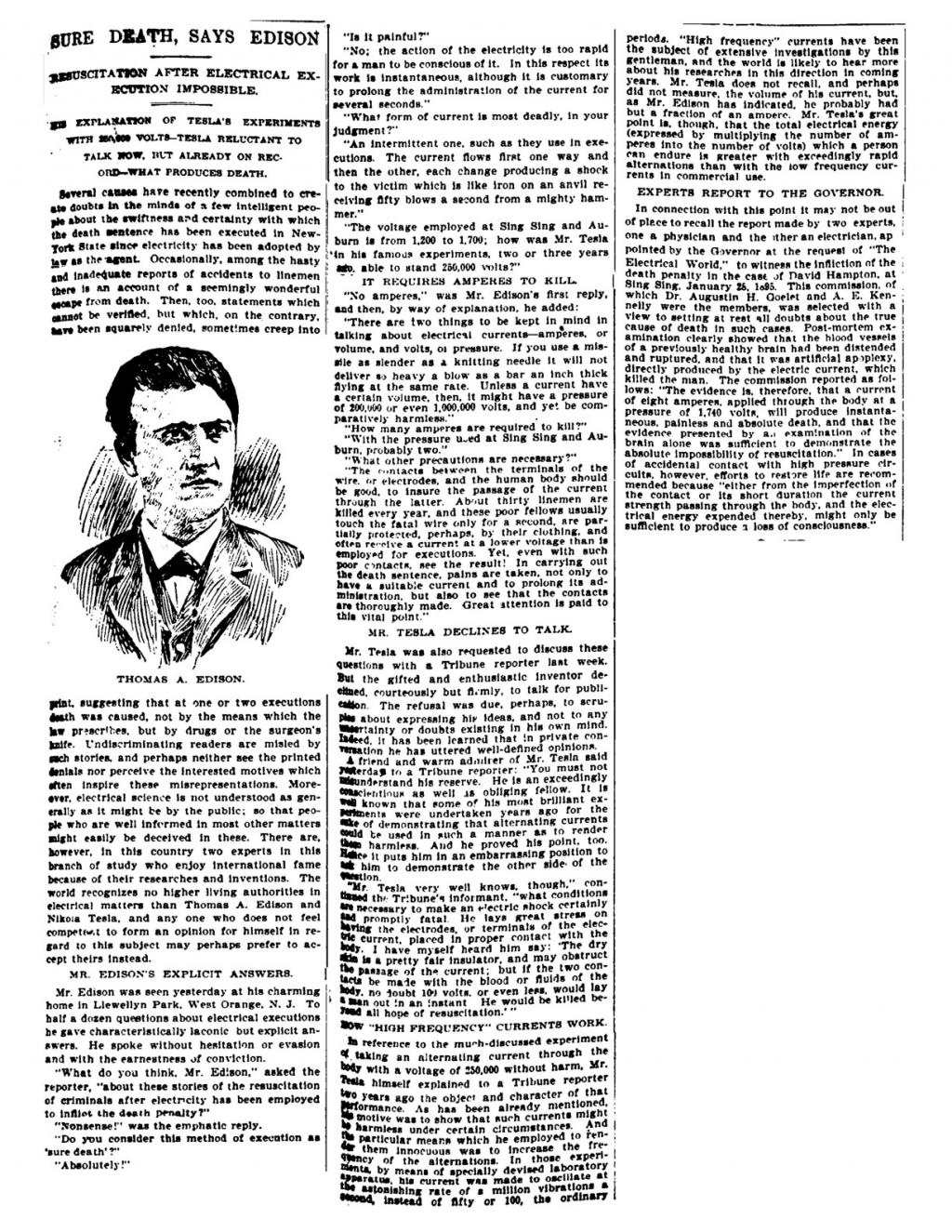