Inventor Says Light and Particles do Not Travel at the Same Speed.

The Herald Tribune of January 20, 1935, contained a report relating to some observations of cosmic rays made by Dr. Werner Kolhoester, director of the Observatory of Potsdam, in connection with the outburst of Nova Herculis (the "new" star) noted in December of last year. I had intended to offer a few words of comment upon the same at that time, but thought it advisable to read first the original statement published in the Supplement of the "Berliner Tageblatt" of January 20, 1935, which has been forwarded to me through the courtesy of the German Consulate.

Would Confirm His Theory

This news item has interested me, as the results announced, if valid, would be another confirmation of my theory of cosmic rays advanced in 1896 according to which these radiations can only emanate from such vast and incandescent heavenly bodies as our sun, placed in an almost perfect vacuum and charged to tremendous potentials, sufficient for imparting to minute similarly electrified particles immense speeds and energies by electrostatic repulsion. I have proved this theory rigorously by experiments and deductions, but had I not done so, it would still be established as a scientific truth, for there is no force or effect produced in the universe which, even if amplified millions of times, could account for the cosmic phenomena discovered by me.

Now, a Nova, in its phase of greatest brightness and transcending temperature at the surface, is a generator of cosmic rays incomparably more powerful than our sun. But while this is unquestionably true, the findings of the German radiologist are open to serious objections.

In the first place, calculation conformable to my theory shows that in order to cause an increase in the intensity of the rays of the order found, the surface temperature of the star, assuming its distance 1,200 light years, could not have been much less than 5,000,000 degrees centigrade. Such a high value is extremely improbable although in a Nova, in which radiation of heat from the inside is greatly facilitated by expansion, the difference in the temperatures of the central and peripheral parts may not be very great.

Then, again, the increase recorded, amounting to about 1 percent of the intensity of cosmic rays emitted by our sun, is too small for drawing a reliable conclusion in view of the influence of weather conditions and other disturbing causes. It must also be borne in mind that the coincidence method adopted is far from being accurate.

There exists, however, an element of incertitude which in itself is sufficient to invalidate completely the results obtained and of which Dr. Kolhoerster does not seem to have thought. Light is a wave motion of definite velocity, determined by the elastic force and density of the medium. Cosmic rays are particles of matter, the speed of which depends on the propelling force and mass and may be much smaller or greater than that of light.

Consequently, there can be no concordance in the phases of the two disturbances at the place of observation. The cosmic rays, generated during the maximum brightness of the star, may reach the place many centuries sooner or later than the light, according to their speed. It thus appears that the results announced cannot have been due to Nova Herculis. Considering further the briefness and small number of star outburts, it is evident that the Novae cannot contribute appreciably to the steady rain of cosmic particles pouring upon the earth from the countless suns of the universe. 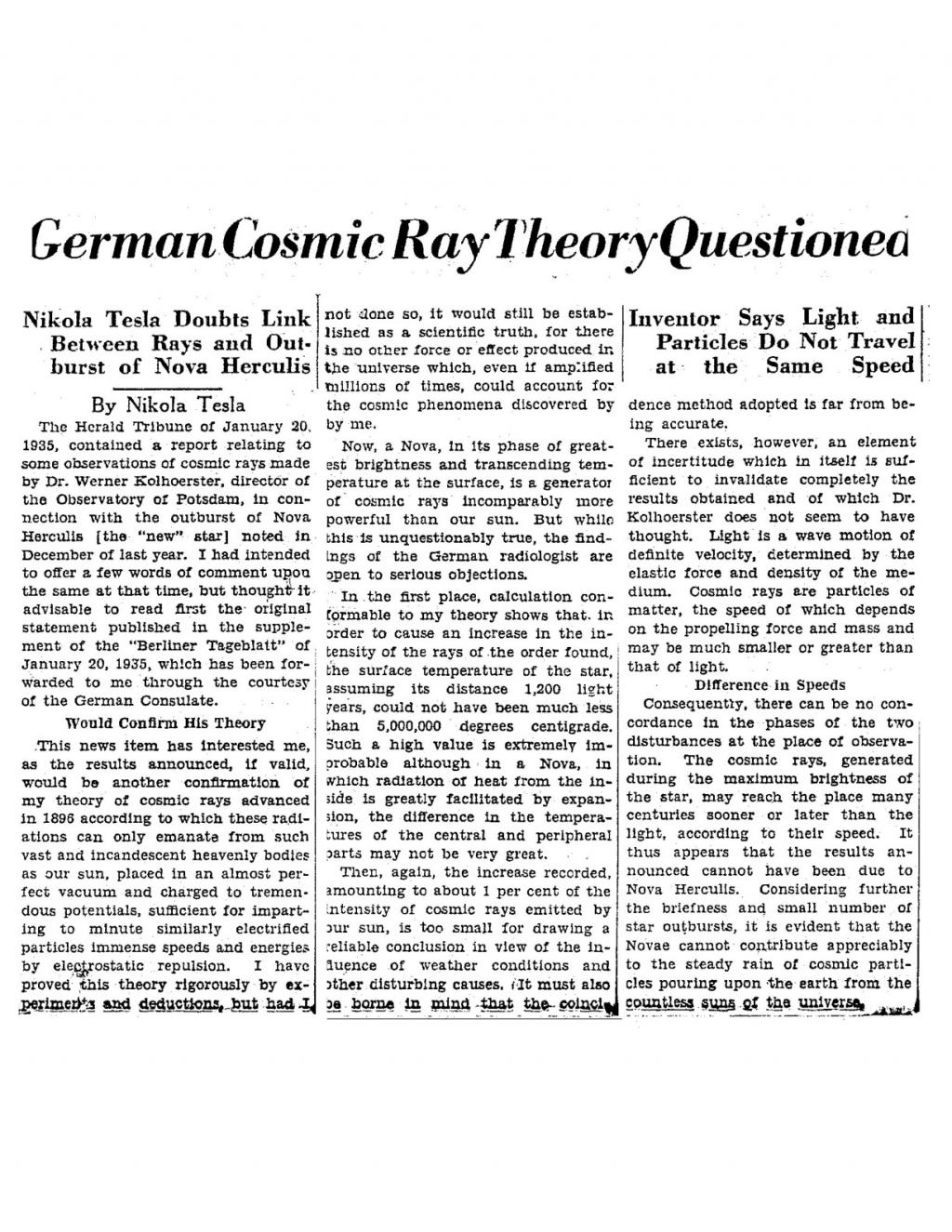