Intimates Discovery Soon to Be Announced Has to Do With Harnessing Sun Rays.

Scientist, Whose Theory Is Based on 36 Years' Study, Calls Atomic Energy Idea "Illusionary."

Nikola Tesla, the inventor, who will celebrate his seventy-fifth birthday Friday, said in an interview yesterday that he soon would announce what he regards as "by far the most important discovery" at any he has made during his long career.

"It will throw light on many puzzling phenomena of the cosmos," he remarked, "and may prove also of great industrial value, particularly in creating a new and virtually unlimited market for steel."

"I have been wonderfully fortunate," said Mr. Tesla, who looks much younger than his years, "in the evolution of new ideas, and the thought that a number of them will be remembered by posterity makes me happy indeed. I am confident that my rotating field and induction motor, and the wireless system I have given to the world, will live long after I have gone. Nevertheless, it seems to me, my latest discoveries will be considered the most important.

"I expect that they will mark a distinct departure in science and will determine largely the direction of its future development. But they may also prove of great practical value, and in that event an industrial revolution may be inaugurated. So far I have succeeded in proving my theories by experiments, measurements and calculations based on them, which, I am confident, will prove true.

"If so, then a new source of power, available at any point of the globe, in amounts practically unlimited, will be opened up."

Asked to indicate more explicitly the nature of this power, Mr. Tesla said:

"I can only say at this time that it will come from an entirely new and unsuspected source, and will be for all practical purposes constant day and night, and at all times of the year. The apparatus for capturing the energy and transforming it will partake both of mechanical and electrical features, and will be of ideal simplicity.

"At first the cost may be found too high, but this obstacle eventually will be overcome. Moreover, the instrument will be, so to speak, indestructible, and will continue to function for any length of time without additional expenditures."

"When and where do you expect to make the official announcement of your new discoveries?" the inventor was asked.

"These discoveries," he replied, "did not come to me over night, but as the result of intense study and experimentation for nearly thirty-six years. I am naturally anxious to give the facts to the world as soon as possible, but I also wish to present them in a finished form. That may take a few months or a few years."

The inventor was asked whether it would be possible to apply his new process to harnessing the energy of the cosmic ray. He smiled.

"All the energy," he said, "that the earth receives from all the suns and stars of the universe is only about one-quarter of 1 per cent of that which it receives directly from the sun. Therefore, it would be incomparably more rational to harness the heat and light rays of the sun than to attempt to capture the insignificant energy of this radiation."

"Do you think this ever will be accomplished successfully?"

"We can do it now, and we are doing it to a certain extent. But the tremendous handicap is found in the periodic character of this kind of energy supply. Many attempts have been made in this direction, but invariably it was found that the power is too expensive."

"Does your process have to do with atomic energy?"

"The idea of atomic energy," he answered, "is illusionary, but it has taken so powerful a hold on the minds that, although I have preached against it for twenty~five years, there still are some who believe it to be realizable.

"I have disintegrated atoms in my experiments with a high potential vacuum tube I brought out in 1896, which I consider one of my best inventions. I have operated it with pressures ranging from 4,000,000 to 18,000,000 volts. More recently I have designed an apparatus for 50,000,000 volts which should produce many results of great scientific importance.

"But as to atomic energy, my experimental observations have shown that the process of disintegration is not accompanied by a liberation of such energy as might be expected from the present theories."

"What is your opinion of the source and the nature of the cosmic ray?" he was asked.

"I called attention" he said, "to the probable existence of this radiation while investigating Roentgen rays and radioactivity. In 1899 I erected a broadcasting plant at Colorado Springs, the first and only wireless plant in existence at that time, and there confirmed my theory by actual observation. My findings are in disagreement with the theories more recently advanced.

"I have satisfied myself that the rays are not generated by the formation of new matter in space, a process which would be like water running up hill. Nor do they come to any appreciable amount from the stars. According to my investigations the sun emits a radiation of such a penetrative power that it is virtually impossible to absorb it in lead or other substances.

"It has, furthermore, other extraordinary properties in regard to which I shall express myself at some future date. This ray, which I call the primary solar ray, gives rise to a secondary radiation by impact against the cosmic dust scattered through space. It is the secondary radiation which now is commonly called the cosmic ray, and comes, of course, equally from all directions in space."

The inventor advanced his theory that the phenomena of radioactivity are not the result of forces within the radioactive substances but are caused by this ray emitted by the sun. If radium could be screened effectively against this ray it would cease to be radioactive, he said.

Mr. Tesla added he has devoted a great deal of time to experimentation with rocket-propelled ships and has designed a number of machines "with practical objects in view."

"A great development in this field may be confidently expected," he said. "With such machines it will be practicable to attain speeds of nearly a mile a second through the rarefied medium above the stratosphere.

"I anticipate that such machines will be of tremendous importance in international conflicts of the future. I foresee that in times not too distant wars between various countries will be carried on without a single combatant passing the border. At this very time it is possible to construct such infernal machines which will carry any desired quantity of poisoned gases and explosives, launch them against a target thousands of miles away and destroy a whole city.

"If wars are not done away with we are bound to come eventually to this kind of warfare, because it is the most economical means of inflicting injury and striking terror in the hearts of enemies that ever has been imagined. Densely populated countries, like England and Japan, will be at a great disadvantage as compared with those embracing vast territories, such as the United States and Russia." 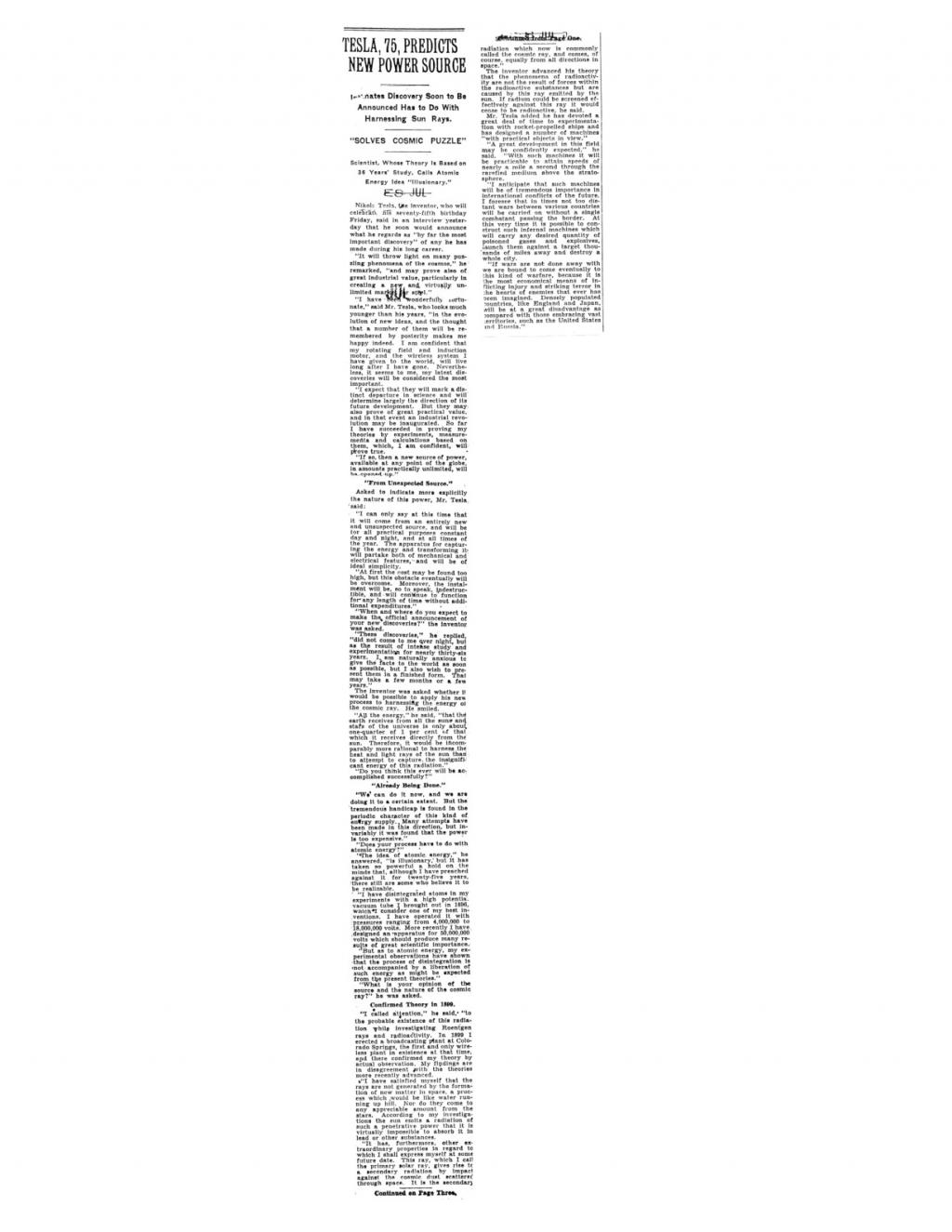