Nikola Tesla, Pointing to 'Grievous Errors' of the Past, Explains Radio as He Sees It at Age of 77 — He Expects Television

A tall, lean inventor in a cut-away walked into his skyscraper parlor thirty-three floors above the sidewalks of New York, laid his black derby on the table, opened the window and then was ready to talk about radio's past, present and future. He was Nikola Tesla, the inventor whose discovery of the rotary magnetic field made possible the alternating-current motor. He described a system of wireless transmission of energy in 1892.

Seven milestones beyond three-score and ten, this electrical wizard, who came to America in 1884, looked back across the years, recalled where theorists often chose wrong paths at the crossroads of science and then turned his thoughts to the future in which television lurks.

A Spectacle That Frightens.

“There is something frightening about the universe when we consider that only our senses of sound and sight make it beautiful,” said Mr. Tesla as his furrowed brow indicated he is puzzled with its destiny. “Just think, the universe is darker than the darkest ink; colder than the coldest ice and more silent than a silent tomb, with all the bodies rushing through it at terrific speeds. What an awe-inspiring picture, isn't it? Yet it is our brain that gives merely a physical impression. Sight and sound are the only avenues through which we can perceive it all. Often I have wondered if there is a third sense which we have failed to discover. I'm afraid not,” he said after some hesitation in thought.

Looking back to the mauve decade, to the turn of the century when the world was being thrilled with new ideas and discoveries, Mr. Tesla observes a vast change in the art of invention. Man, he finds, in this streamline era of speed, has little chance to think.

The big, modern research laboratories are but the incubators of ideas as he has watched them function. Seldom, if ever, he explains, has an original idea of any consequence been born in an elaborate laboratory. The egg of science is laid in the nest of solitude. True, it may later be incubated, hatched and nursed in the million-dollar laboratory.

“It is providential that the youth or man of inventive mind is not ‘blessed’ with a million dollars,” said Mr. Tesla. “He would find it difficult to think. The mind is sharper and keener in seclusion and uninterrupted solitude. No big laboratory is needed in which to think. Originality thrives in seclusion free of outside influences beating upon us to cripple the creative mind. Be alone, that is the secret of invention; be alone, that is when ideas are born. That is why many of the earthly miracles have had their genesis in humble surroundings.”

Radio experimenters of this age are following ancient theories, Mr. Tesla believes, and he warns that progress will be more rapid when they discard the old and adopt new ideas. His directions for getting on the right track of radio, television, power transmission by wireless and sundry other branches of science follow:

The fascination of the electro-magnetic theory of light, advanced by Maxwell and subsequently experimentally investigated by Hertz, was so great that even now, although controverted, the scientific minds are under its sway. This theory supposed the existence of a medium which was solid, yet permitted bodies to pass through it without resistance; tenuous beyond conception, and yet, according to some, one thousand times denser than platinum. According to our conceptions of mechanical principles and ages of experience, such a medium was absolutely impossible. Nevertheless, light was considered essentially a phenomenon bound up in that kind of a medium; namely, one capable of transmitting transverse vibrations lite a solid.

“It is true,” said Mr. Tesla, “that many scientific minds envisaged the theory of a gaseous ether, but it was rejected again and again because in such a medium longitudinal waves would be propagated with infinite velocity. Lord Kelvin conceived the so-called contractile ether, possessing properties which would result in a finite velocity of longitudinal waves. In 1885, however, an academic dissertation was published by Professor De Volson Wood, an American, at a Hoboken institution, which dealt with a gaseous ether in which the elasticity, density and specific heat were determined with rare academic elegance. But, so far, everything pertaining to the subject was purely theoretical.

What, then, can light be if it is not a transverse vibration? That was the question he asked himself and set out to find the answer.

“I consider this extremely important,” said Mr. Tesla. “Light cannot be anything else but a longitudinal disturbance in the ether, involving alternate compressions and rarefactions. In other words, light can be nothing else than a sound wave in the ether.”

This appears clearly, Mr. Tesla explained, if it is first realized that, there being no Maxwellian ether, there can be no transverse oscillation in the medium. The Newtonian theory, he believes, is in error, because it falls entirely in not being able to explain how a small candle can project particles with the same speed as the blazing sun, which has an immensely higher temperature.

“We have made sure by experiment,” said Mr. Tesla, “that light propagates with the same velocity irrespective of the character of the source. Such constancy of velocity can only be explained by assuming that it is dependent solely on the physical properties of the medium, especially density and elastic force.

Coming now to the wireless waves, it is still true that they are of the same character as light waves, only they are not transversal but longitudinal. As a matter of fact, radio transmitters emit nothing else but sound waves in the ether, and if the experts will realize this they will find it very much easier to explain the curious observations made in the application of these waves.

“It being a fact that radio waves are essentially like sound waves in the air, it is evident that the shorter the waves the more penetrative they would be. In 1899 I produced electromagnetic waves from one to two millimeters long and observed their actions at a distance. There has been a great hope expressed by various workers that introduction of these waves will have a revolutionary effect, but I am not sharing the opinion. They will be used, of course, but to a very limited extent. It is manifest that applications of the very short waves will not produce any appreciable effect upon the wireless art.

What about the possibilities of power transmission by wireless? the inquirer said.

Here again Mr. Tesla blames “a strange misconception of the experts” and “grievous errors” for retarding the idea. He believes that when it is accomplished, the power will travel on long waves and not on the wings of “uneconomically produced” short waves. He said he could vouch that the scheme of wireless power transmission is entirely practical.

“The application of short waves for power purposes,” said Mr. Tesla, “involves complicated and expensive apparatus for rectification or frequency transformation, which would make any serious attempt to carry out a project of this kind much more difficult from an economical point of view."

When will television come around the corner? he was asked.

“It ought to be with us soon, and some day it will be on a par of perfection with broadcasting of music.” Then with a circular sweep of his arm and added, “There will be large pictures thrown on the wall.” 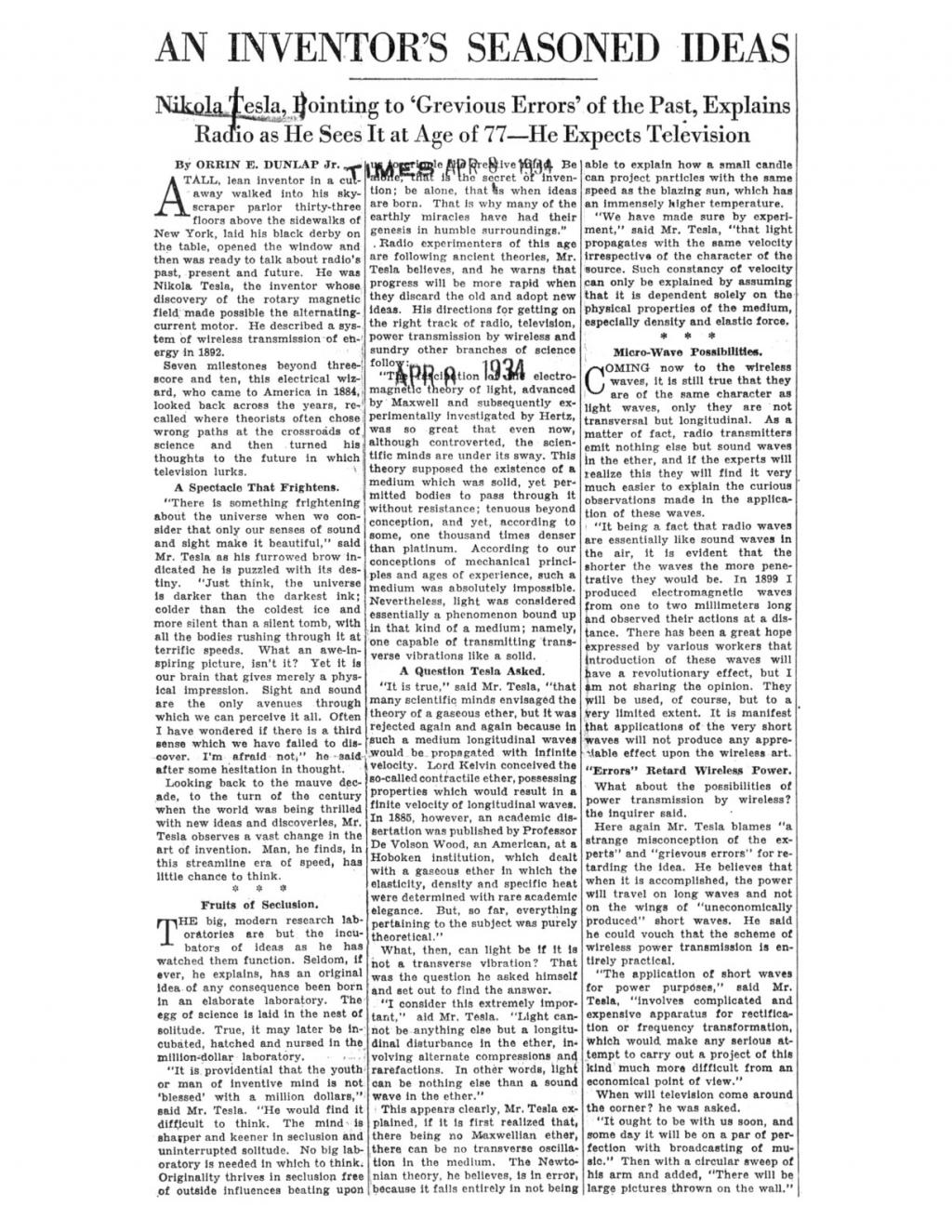