Invention Powerful Enough to Destroy 10,000 Planes at 250 Miles Away, He Asserts.

Scientist, in Interview, Tells of Apparatus That He Says Will Kill Without Trace.

Nikola Tesla, father of modern methods of generation and distribution of electrical energy, who was 78 years old yesterday, announced a new invention, or inventions, which he said, he considered the most important of the 700 made by him so far.

He has perfected a method and apparatus, Dr. Tesla said yesterday in an interview at the Hotel New Yorker, which will send concentrated beams of particles through the free air, of such tremendous energy that they will bring down a fleet of 10,000 enemy airplanes at a distance of 250 miles from a defending nation's border and will cause armies of millions to drop dead in their tracks.

This “death-beam,” Dr. Tesla said, will operate silently but effectively at distances “as far as a telescope could see an object on the ground and as far as the curvature of the earth would permit it.” It will be invisible and will leave no marks behind it beyond its evidence of destruction.

An army of 1,000,000 dead, annihilated in an instant, he said, would not reveal even under the most powerful microscope just what catastrophe had caused its destruction.

When put in operation Dr. Tesla said this latest invention of his would make war impossible. This death-beam, he asserted, would surround each country like an invisible Chinese wall, only a million times more impenetrable. It would make every nation impregnable against attack by airplanes or by large invading armies.

But while it will make every nation safe against any attack by a would-be invader, Dr. Tesla added, the death-beam by its nature could not be employed similarly as a weapon for offense. For this death-beam, he explained, could be generated only from large, stationary and immovable power plants, stationed in the manner of old-time forts at various strategic distances from each country's border. They could not be moved for the purposes of attack.

An exception, however, he added, must be made in the case of battleships, which, he said, would be able to equip themselves with smaller plants for generating the death-beam, with enough power to destroy any airplane approaching for attack from the air.

Battleships to Be Supreme.

The net result of the latter, Dr. Tesla said, will be to establish the supremacy of the battleship over the airplane, and to make the nation with the largest and best equipped battleships supreme over the seas. Submarines would become obsolete, he asserted, as methods for detecting them are so perfected that no advantage is gained by submerging. And once found, he added, the death-beam could be employed to do its work of destruction under water, though not as effectively as in the air.

The production of the death-beam, Dr. Tesla said, involves four new inventions, which have not been announced by him. The scientific details of these inventions are to be given out by him before the proper scientific bodies in the near future. In the meantime he gave out a general statement outlining their nature.

The first invention, he said, comprises a method and apparatus for producing rays and other manifestations of energy in free air, eliminating the high vacuum necessary at present for the production of such rays and beams.

The second is a method and process for producing “very great electrical force.”

The third is a method for amplifying this process in the second invention. The fourth, he said, is “a new method for producing a tremendous electrical repelling force.”

The voltages to be employed in propelling the death-beam to their objective, Dr. Tesla said, will attain the lightning-like potential of 50,000,000 volts. With this enormous voltage, hitherto unattained by manmade means, microscopic particles of matter will be catapulted on their mission of defensive destruction, Dr. Tesla asserted. 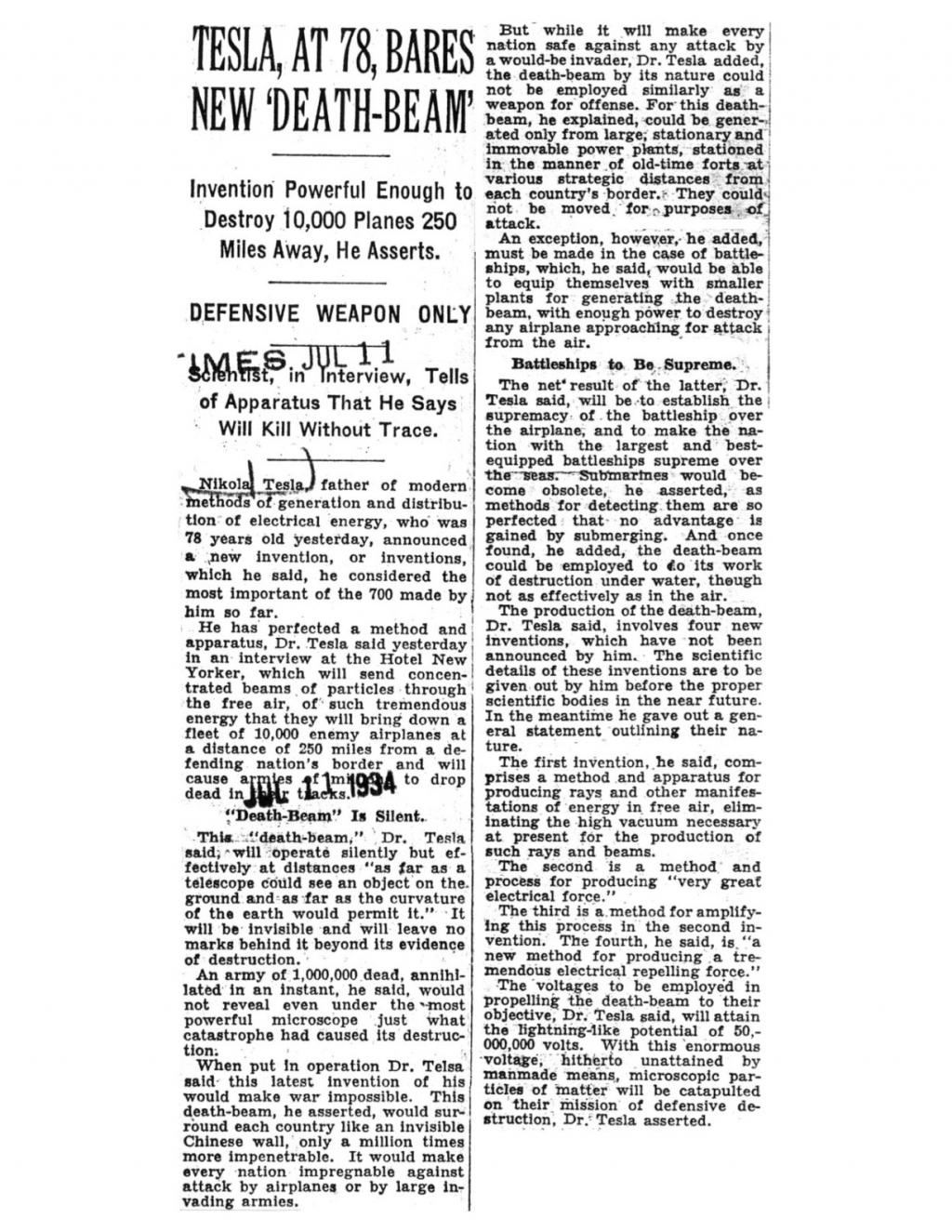