Says His Wireless Invention Will Gird the Earth With Energy for Industry.

Nikola Tesla, inventor, who celebrated his eightieth birthday yesterday, foresaw an industrial civilization founded on cheap and unlimited power transmitted from a central point to any part of the globe without wires.

This new system of power transmission will have its first practical demonstration within a year, Dr. Tesla predicted. He said he had perfected the principles which will create the necessary apparatus.

Each year on his birthday the inventor of the principle of the rotary magnetic field, new forms of dynamos, transformers and 700 other devices which have played a leading role in technological development plays host to the press. Yesterday he gave a luncheon for fifteen newspaper men and women at the Hotel New Yorker, and while his guests feasted he contented himself with three oranges and a quart of milk.

Dr. Tesla recalled his first meeting with Thomas A. Edison, relived some of the interesting episodes in his own life, describing his researches into such varied fields as relativity, death rays, psychic phenomena, lightning machines and power development.

Between sips of the warm milk, he eyed the newspaper folk with their Scotch and sodas and confided that if he had not given up drinking alcohol with the enactment of prohibition he would live to be 150 years old.

“As it is, I believe my abstinence from alcohol during the latter part of my life has lopped off fifteen years from my life, and now I expect to live only 135 years,” he remarked. “Alcohol is the elixir of life, but when this country passed the Prohibition Law I felt that as a patriotic American I should stop drinking whisky. I have not touched it since.”

Meat is another food which he never touches, Dr. Tesla explained. Two quarts of milk a day provide him with all the proteins and calories he needs to remain alive, he said. Although as a rule he does not retire until 5:30 o'clock every morning, he gets up about 10 A. M. and feels full of energy.

The development of wireless transmission of power will overshadow any of his past accomplishments and will usher in a new civilization for mankind, Dr. Tesla predicted. He explained that his system will make it possible, for example, to install a hydro-electric plant at Muscle Shoals and transmit the power generated to England, China, Little America or Alaska with equal ease and at comparatively little cost. 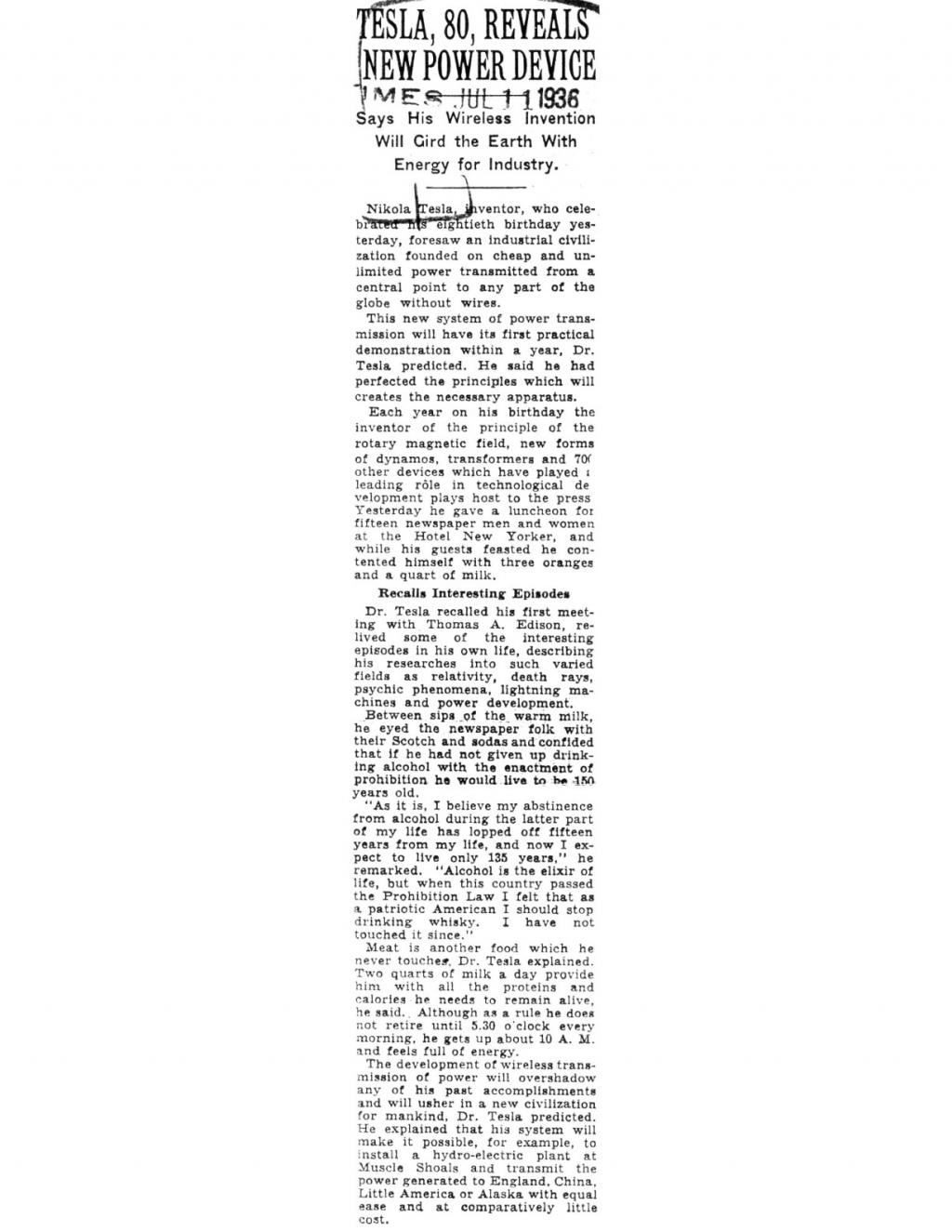