Tesla Is Provider Of Pigeon Relief

FORMERLY DID IT HIMSELF

Nearing 81, He Now Finds It More Convenient to Engage Proxy for the Task

A red-headed boy in a Western Union uniform walked along the promenade in front of the Public Library on Fifth Avenue at Forty-second Street yesterday atfternoon carrying a good-sized paper bag about which a flock of pigeons fluttered. He was doing a mission for Nikola Tesla, the famous inventor.

Mr. Tesla, at his apartment in the Hotel New Yorker, was reluctant to talk about the pigeons. Asked if it was he who had paid to have the boy feed them twice a day since last Fall, he replied:

“Yes, I take care of them all the time.”

He has been Interested in pigeons for seventy-five years, since he was a small boy in his native village in Austrian Croatia. He will celebrate his eighty-first birthday on July 10.

The messenger, John Lucan, has become well known to the pigeons, and they fly to meet him as he walks to the feeding place in front of the south fountain, about 10 A. M. and 3:30 P. M. every day. He looks out for any that fall ill, and sees to it that they have their share of the five pounds of corn he distributes at a feeding. Mr. Tesla used to do this himself, but lately he has found it more convenient to send the boy.

During the Winter, and until the water in the fountains is turned on, Johnny has kept a small bath for the pigeons. Sometimes he has had to break ice off it, but it has always been there, in the south fountain, where the birds came to expect it. Johnny also feeds pigeons at St. Patrick's Cathedral, and in Bryant Park, back of the library.

Mr. Tesla's commission is only one of many novel sorts carried out by the boys of the telegraph companies. For example, some of the boys have developed a technique for rice-throwing at weddings. When a couple having only few friends in the city gets married, messengers with the proper experience may be hired to throw the rice at the right velocity to lend a sentimental touch while avoiding injury to the participants.

For several months a boy called every morning to chat with an elderly woman who felt that she needed some one to stimulate her interest in current events. He managed to find enough topics of conversation to keep the assignment going for a considerable time.

Other boys have taken children to theaters, demonstrated new articles to shopkeepers, climbed trees to rescue pet cats or birds, and minded offices while their proprietors went to lunch. 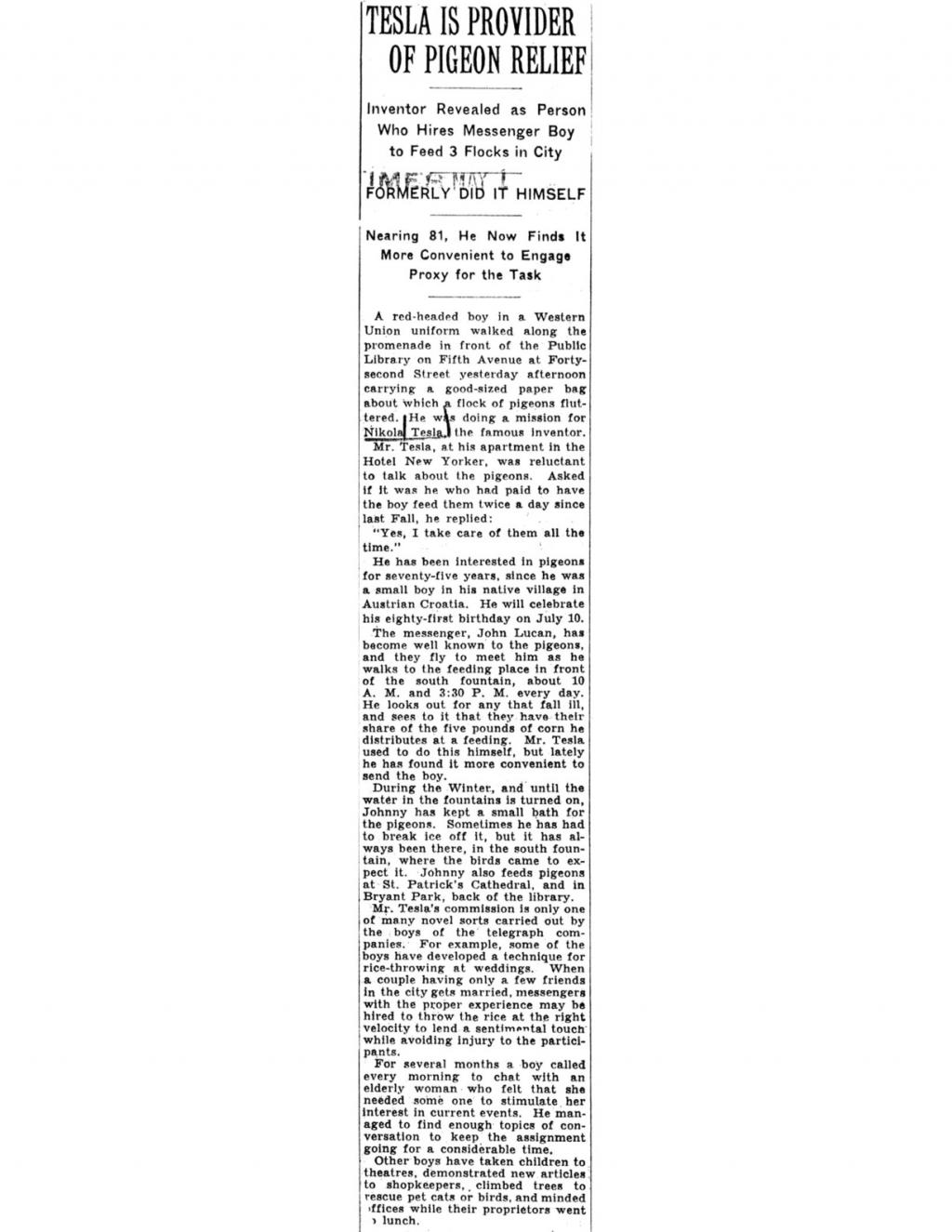