“Since writing my last note on this motor Mr. Tesla has read an interesting description of his system before the Institute of Electrical Engineers, and in his answer to the note referred to he has further described his motors. The study of both of these papers has increased my admiration for the simplicity and success of his system.

“The motor discussed in my last note was of the synchronous type with two short-circuited coils at right angles to one another. Further, Mr. Tesla in his paper before the Institute of Electrical Engineers states that ‘in a general distributing system of this kind the following plan should be adopted. . . . The motors operated from this generator should be of the synchronous type, but possessing sufficient rotary effort to insure starting.’ So I will reconsider the statements I made in the previous note with reference to this type, and try to see if they should be modified. With respect to my views as to the theory of such a motor, they look at the phenomena from a different stantpoint from that taken in Mr. Tesla’s paper, and an unfortunate misprint (‘It’ for ‘I,’ the symbol used to represent current) greatly obscures the meaning. Apart from this, my conclusions were that it was doubtful if such a motor would start under load — meaning to attain its proper number of revolutions — that if a load of great inertia be suddenly applied so that the motor is called on for more than its maximum load, it will stop or take up some slower speed; and finally, that the currents do not decrease in proportion to the load. Now, the first two questions can be settled so easily and simply by experiment, that it is hardly worth while attempting to evolve reasons for believing one way or the other. The way I would look at it is this: The motor combines a synchronous and nonsynchronous part. The former does little work until the motor reaches its normal speed; the latter does considerable work until the motor reaches a speed lower than the normal by an amount depending on the load. Now, how is the speed to jump from this lower value, at which equilibrium is reached, to the normal value? It might do so in a number of cases where the inertia is great; in others I must confess to doubts. As to the second point, my objection follows directly from what I have said above.

“With respect to the consumption of current at small loads, I think that in any synchronous motor, the effect of decreasing load is simply to decrease the difference between two quantities of work — one plus, the other minus — that the motor does. If this is the case, the currents should not vary in proportion to the load, but should be greater in proportion with smaller loads.

“With respect to the non-synchronous motors, however, I have very little but admiration to express. I cannot help thinking that they can be governed without resorting to synchronism, and in this case they will have advantages that will greatly aid in the advance of electric distribution.

“Finally, I must confess to some disappointment that no data has been given as to the performance of Mr. Tesla’s motors. One cannot, of course, expect from machines that are just emerging from an experimental state the efficiency and output that they will finally attain, but a few curves of the currents in the magnets and armature coils under different conditions would tell us more of the possibilities and directions of improvement than could any amount of discussion.

“In the meantime, I would congratulate Mr. Tesla on the discovery and application of a novel means of obtaining continuous rotation from alternating currents, and I shall watch the further development of his system with interest.” 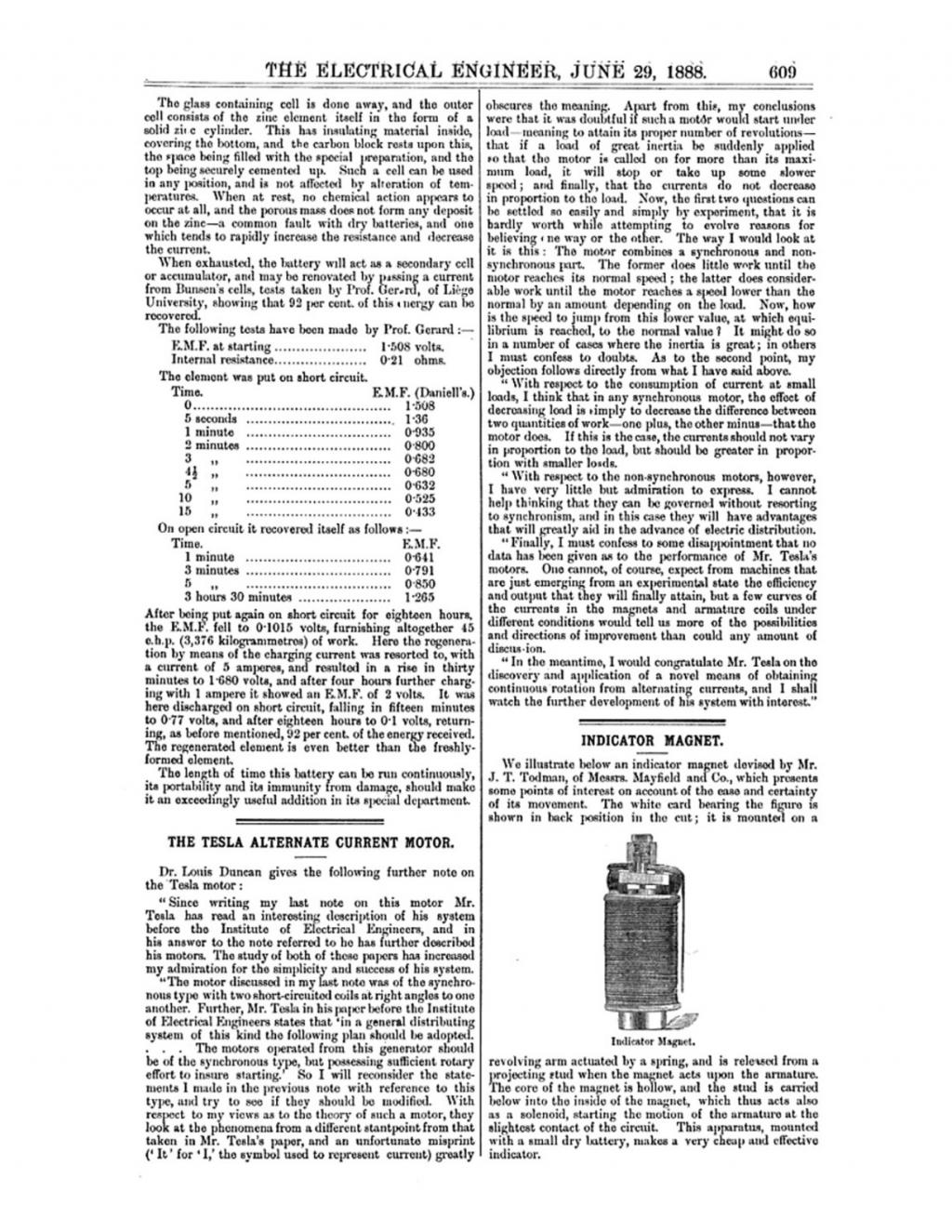