To the Editor of The Sun - Sir: Had it not been for other urgent duties, I would before this have acknowledged your highly appreciative editorial of November 13. Such earnest comments and the frequent evidences of the highest appreciation of my labors by men who are the recognized leaders of this day in scientific speculation, discovery and invention are a powerful stimulus, and I am thankful for them. There is nothing that gives me so much strength and courage as the feeling that those who are competent to judge have faith in me.

Permit me on this occasion to make a few statements which will define my position in the various fields of investigation you have touched upon.

I can not but gratefully acknowledge my indebtedness to earlier workers, as Dr. Hertz and Dr. Lodge, in my efforts to produce a practical and economical lighting system on the lines which I first disclosed in a lecture at Columbia College in 1891 . There exists a popular error in regard to this light, inasmuch as it is believed that it can be obtained without generation of heat. The enthusiasm of Dr. Lodge is probably responsible for this error, which I have pointed out early by showing the impossibility of reaching a high vibration without going through the lower or fundamental tones. On purely theoretical grounds such a result is thinkable, but it would imply a device for starting the vibrations of unattainable qualities, inasmuch as it would have to be entirely devoid of inertia and other properties of matter. Though I have conceptions in this regard, I dismiss for the present this proposition as being impossible. We can not produce light without heat, but we can surely produce a more efficient light than that obtained in the incandescent lamp, which, though a beautiful invention, is sadly lacking in the feature of efficiency. As the first step toward this realization, I have found it necessary to invent some method for transforming economically the ordinary currents as furnished from the lighting circuits into electrical vibrations of great rapidity. This was a difficult problem, and it was only recently that I was able to announce its practical and thoroughly satisfactory solution. But this was not the only requirement in a system of this kind. It was necessary also to increase the intensity of the light, which at first was very feeble. In this direction, too, I met with complete success, so that at present I am producing a thoroughly service- able and economical light of any desired intensity. I do not mean to say that this system will revolutionize those in use at present, which have resulted from the co-operation of many able men. I am only sure that it will have its fields of use-fulness.

As to the idea of rendering the energy of the sun available for industrial purposes, it fascinated me early but I must admit it was only long after I discovered the rotating magnetic field that it took a firm hold upon my mind. In assailing the problem I found two possible ways of solving it. Either power was to be developed on the spot by converting the energy of the sun's radiations or the energy of vast reservoirs was to be transmitted economically to any distance. Though there were other possible sources of economical power, only the two solutions mentioned offer the ideal feature of power being obtained without any consumption of material. After long thought I finally arrived at two solutions, but on the first of these, namely, that referring to the development of power in any locality from the sun's radiations, I can not dwell at present.

The system of power transmission without wires, in the form in which I have described it recently, originated in this manner. Starting from two facts that the earth was a conductor insulated in space, and that a body can not be charged without causing an equivalent displacement of electricity in the earth, I undertook to construct a machine suited for creating as large a displacement as possible of the earth's electricity.

This machine was simply to charge and discharge in rapid succession a body insulated in space, thus altering periodically the amount of electricity in the earth, and consequently the pressure all over its surface. It was nothing but what in mechanics is a pump, forcing water from a large reservoir into a small one and back again. Primarily I contemplated only the sending of messages to great distances in this manner, and I described the scheme in detail, pointing out on that occasion the importance of ascertaining certain electrical conditions of the earth. The attractive feature of this plan was that the intensity of the signals should diminish very little with the distance, and, in fact, should not diminish at all, if it were not for certain losses occurring, chiefly in the atmosphere. As all my previous ideas, this one, too, received the treatment of Marsyas, but it forms, nevertheless, the basis of what is now known as "wireless telegraphy." This statement will bear rigorous examination, but it is not made with the intent of detracting from the merit of others. On the contrary, it is with great pleasure that I acknowledge the early work of Dr. Lodge, the brilliant experiments of Marconi, and of a later experimenter in this line. Dr. Slaby, of Berlin. Now, this idea I extended to a system of power transmission, and I submitted it to Helmholtz on the occasion of his visit to this country. He unhesitatingly said that power could certainly be transmitted in this manner, but he doubted that I could ever produce an apparatus capable of creating the high pressures of a number of million volts, which were required to attack the problem with any chance of success, and that I could overcome the difficulties of insulation. Impossible as this problem seemed at first, I was fortunate to master it in a comparatively short time, and it was in perfecting this apparatus that I came to a turning point in the development of this idea. I, namely, at once observed that the air, which is a perfect insulator for currents produced by ordinary apparatus, was easily traversed by currents furnished by my improved machine, giving a tension of something like 2,500,000 volts. A further investigation in this direction led to another valuable fact; namely, that the conductivity of the air for these currents increased very rapidly with its degree of rarefaction, and at once the transmission of energy through the upper strata of air, which, without such results as I have obtained, would be nothing more than a dream, became easily realizable. This appears all the more certain, as I found it quite practicable to transmit, under conditions such as exist in heights well explored, electrical energy in large amounts. I have thus overcome all the chief obstacles which originally stood in the way, and the success of my system now rests merely on engineering skill.

Referring to my latest invention [the telautomaton], I wish to bring out a point which has been overlooked. I arrived, as has been stated, at the idea through entirely abstract speculations on the human organism, which I conceived to be a self-propelling machine, the motions of which are governed by impressions received through the eye. Endeavoring to construct a mechanical model resembling in its essential, material features the human body, I was led to combine a controlling device, or organ sensitive to certain waves, with a body provided with propelling and directing mechanism, and the rest naturally followed. Originally the idea interested me only from the scientific point of view, but soon I saw that I had made a departure which sooner or later must produce a profound change in things and conditions presently existing. I hope this change will be for the good only, for, if it were otherwise, I wish that I had never made the invention. The future may or may not bear out my present convictions, but I can not refrain from saying that it is difficult for me to see at present how, with such a principle brought to great perfection, as it undoubtedly will be in the course of time, guns can maintain themselves as weapons. We shall be able, by availing ourselves of this advance, to send a projectile at much greater distance, it will not be limited in any way by weight or amount of explosive charge, we shall be able to submerge it at command, to arrest it in its flight, and call it back, and send it out again and explode it at will, and, more than this, it will never make a miss, since all chance in this regard, if hitting the object of attack were at all required, is eliminated. But the chief feature of such a weapon is still to be told; namely, it may be made to respond only to a certain note or tune, it may be endowed with selective power. Directly such an arm is produced, it becomes almost impossible to meet it with a corresponding development. It is this feature, perhaps more than in its power of destruction, that its tendency to arrest the development of arms and to stop warfare will reside.

With renewed thanks, I remain,
Very truly yours,
N. Tesla. 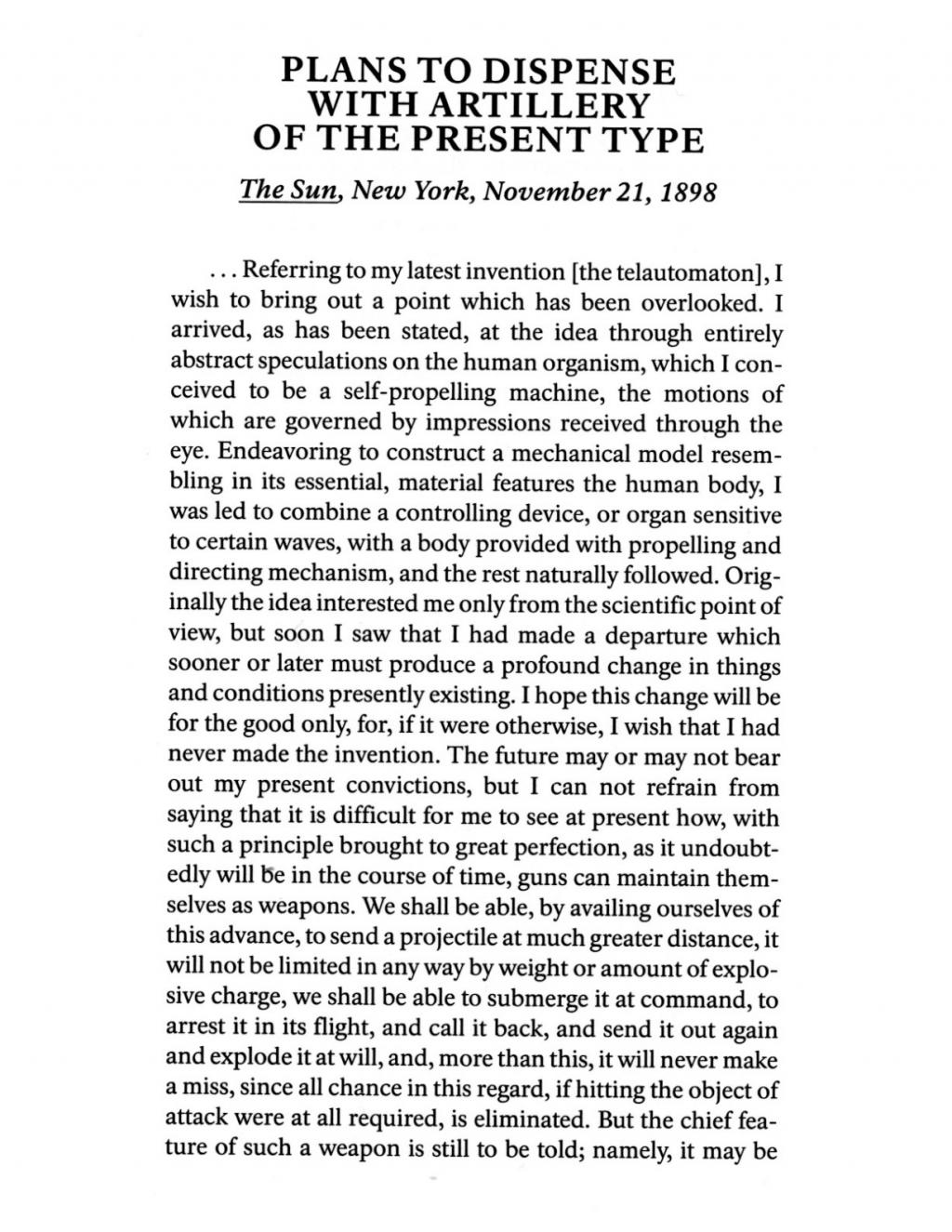