The three use advanced industrial transistors to produce what is essentially 1.6 million volts of lightning to play music from Bach’s Toccata and Fugue to the 8-bit theme from Super Mario Brothers. It works by precisely controlling the firing rate of the sparks, using them like a speaker to make music so ear-splittingly loud that last summer people living a half-mile away from the warehouse complained.

“When I first started making sparks, most people I know just thought that was insane,” says Blake, laughing. “ ‘Why are you messing with lightning bolts in your backyard?’ When I started putting on the suit and playing around with (the sparks), they were speechless. That was beyond crazy.”

Besides the deadly violet sparks, the smell of ozone and pizza, and the Zelda theme music played at rock-concert levels, the hobby offers technical challenges and the chance to briefly step into a sort of alternate reality.

“The plasma looks really beautiful up close,” says Blake of the man-made lightning. “There’s all sorts of fractal patterns and all sorts of detail in there that you can’t make out if you’re scared of it.”

Not that you shouldn’t be scared. Chip Atkinson, of Colorado, who runs a Tesla coil mailing list that has grown from 700 to 900 in recent years, has a nearly 7,000-word warning about the hobby’s perils on his Web site. Among them: “Explosions can and do occur with Tesla coils!”

“It’s one of those things where if you don’t know what you’re doing, it can be fatal,” says Bert Hickman, 62, a retired Woodridge engineer and former Tesla coil hobbyist.

The three men have years of experience. Larson and Ward are Fermilab employees and Streamwood residents. Ward started building Tesla coils as an eighth-grader in Oak Forest. They experimented to create better shows. Blake setting two-by-fours on fire by channeling the sparks with his finger got a good response. Another favorite involves Blake holding up orange neon tubes that glow like light sabers amid sparks that play the “Imperial March” from “Star Wars.”

“We’re sort of learning as we go,” Ward says.

The Tesla coils are ready to fire. Ward and Larson stand at a folding table about 20 feet away, using a series of knobs and sliders to control the sparks. The music comes from Ward’s laptop. A large red “emergency off” button sits at the table’s center.

Part of the competition among coilers is the length of their sparks.

“It’s really sort of lacking right now, actually,” says Ward after running the coils for a couple of minutes. He and Larson add wooden spacers under the coils. “We’re trying to make them a little bigger.”

Though their coils can shoot sparks of up to 12 feet, no hobbyist has replicated the 135-foot ones reportedly generated by a massive coil Tesla built 110 years ago in Colorado Springs, the three say. That man built a 122-foot coil to test his theory that electricity could be sent wirelessly through the Earth’s ionosphere, but the length of his sparks is viewed skeptically today.

On this night, the Masters of Lightning just want to make sure Blake’s new helmet is safe. It’s tested first without Blake inside, then with him wearing it and lifting his hands to low-voltage sparks from a coil.

With nowhere to run their coils over the winter, the men work on new ideas. Blake already has a project -- “re-engineering” his chain metal pants to allow more freedom of movement. Then they wait until they can once again see the looks on people’s faces as their fantastic apparatus roars to life. 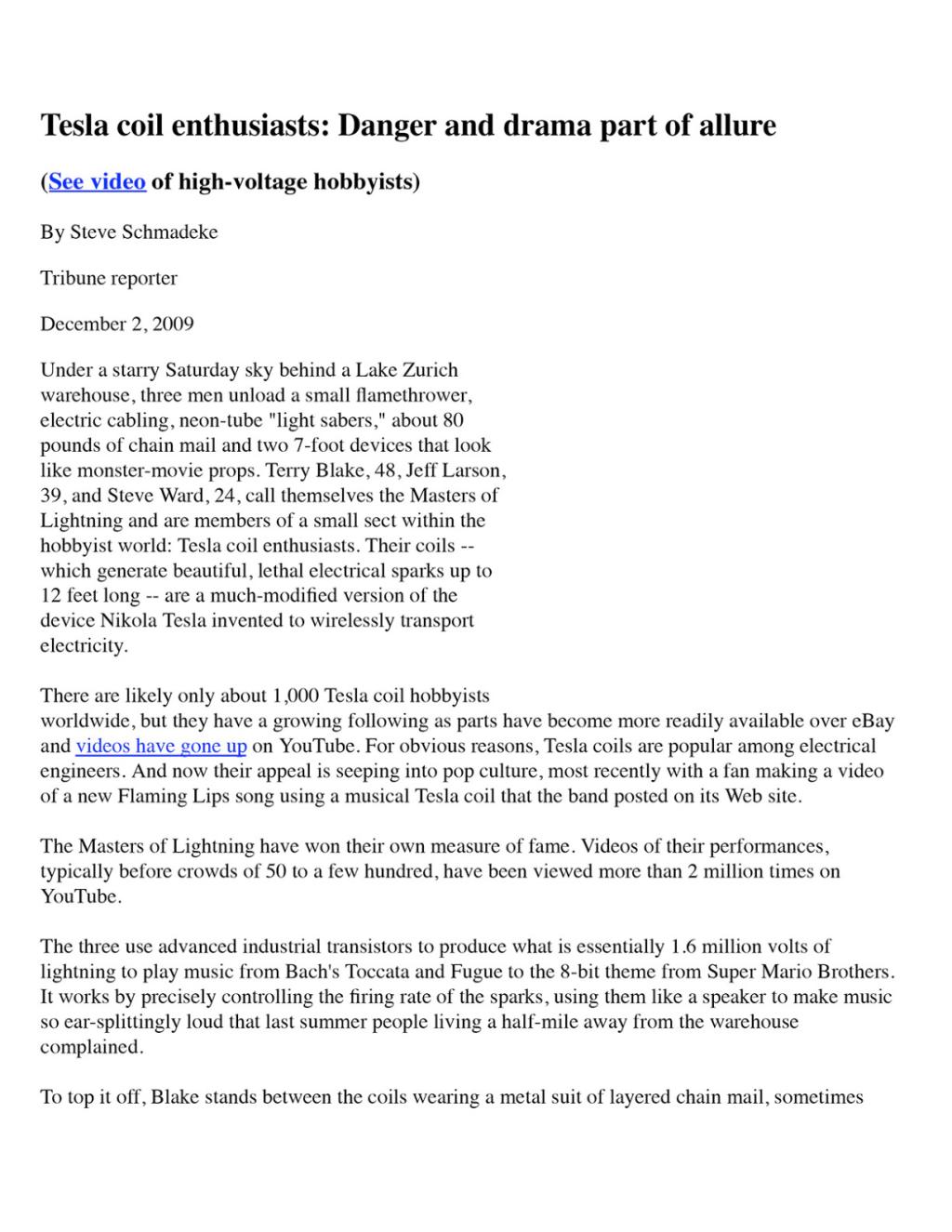