A Battle to Preserve a Visionary’s Bold Failure

In 1901, Nikola Tesla began work on a global system of giant towers meant to relay through the air not only news, stock reports and even pictures but also, unbeknown to investors such as J. Pierpont Morgan, free electricity for one and all.

It was the inventor’s biggest project, and his most audacious.

The first tower rose on rural Long Island and, by 1903, stood more than 18 stories tall. One midsummer night, it emitted a dull rumble and proceeded to hurl bolts of electricity into the sky. The blinding flashes, The New York Sun reported, “seemed to shoot off into the darkness on some mysterious errand.”

But the system failed for want of money, and at least partly for scientific viability. Tesla never finished his prototype tower and was forced to abandon its adjoining laboratory.

Today, a fight is looming over the ghostly remains of that site, called Wardenclyffe - what Tesla authorities call the only surviving workplace of the eccentric genius who dreamed countless big dreams while pioneering wireless communication and alternating current. The disagreement began recently after the property went up for sale in Shoreham, N.Y.

A science group on Long Island wants to turn the 16-acre site into a Tesla museum and education center, and hopes to get the land donated to that end. But the owner, the Agfa Corporation, says it must sell the property to raise money in hard economic times. The company’s real estate broker says the land, listed at $1.6 million, can “be delivered fully cleared and level,” a statement that has thrown the preservationists into action.

The ruins of Wardenclyffe include the tower’s foundation and the large brick laboratory, designed by Tesla’s friend Stanford White, the celebrated architect.

“It’s hugely important to protect this site,” said Marc J. Seifer, author of “Wizard,” a Tesla biography. “He’s an icon. He stands for what humans are supposed to do - honor nature while using high technology to harness its powers.”

Recently, New York State echoed that judgment. The commissioner of historic preservation wrote Dr. Seifer on behalf of Gov. David A. Paterson to back Wardenclyffe’s preservation and listing in the National Register of Historic Places.

On Long Island, Tesla enthusiasts vow to obtain the land one way or another, saying that saving a symbol of Tesla’s accomplishments would help restore the visionary to his rightful place as an architect of the modern age.

“A lot of his work was way ahead of his time,” said Jane Alcorn, president of the Tesla Science Center, a private group in Shoreham that is seeking to acquire Wardenclyffe.

Dr. Ljubo Vujovic, president of the Tesla Memorial Society of New York, said destroying the old lab “would be a terrible thing for the United States and the world. It’s a piece of history.”

Tesla, who lived from 1856 to 1943, made bitter enemies who dismissed some of his claims as exaggerated, helping tarnish his reputation in his lifetime. He was part recluse, part showman. He issued publicity photos (actually double exposures) showing him reading quietly in his laboratory amid deadly flashes.

Today, his work tends to be poorly known among scientists, though some call him an intuitive genius far ahead of his peers. Socially, his popularity has soared, elevating him to cult status.

Books and Web sites abound. Wikipedia says the inventor obtained at least 700 patents. YouTube has several Tesla videos, including one of a break-in at Wardenclyffe. A rock band calls itself Tesla. An electric car company backed by Google’s founders calls itself Tesla Motors.

Tesla seized on the colossal project at the age of 44 while living in New York City. An impeccably dressed bon vivant of Serbian birth, he was widely celebrated for his inventions of motors and power distribution systems that used the form of electricity known as alternating current, which beat out direct current (and Thomas Edison) to electrify the world.

His patents made him a rich man, at least for a while. He lived at the Waldorf-Astoria and loved to hobnob with the famous at Delmonico’s and the Players Club.

Around 1900, as Tesla planned what would become Wardenclyffe, inventors around the world were racing for what was considered the next big thing - wireless communication. His own plan was to turn alternating current into electromagnetic waves that flashed from antennas to distant receivers. This is essentially what radio transmission is. The scale of his vision was gargantuan, however, eclipsing that of any rival.

Work on the prototype tower began in mid-1901 on the North Shore of Long Island at a site Tesla named after a patron and the nearby cliffs. “The proposed plant at Wardenclyffe,” The New York Times reported, “will be the first of a number that the electrician proposes to establish in this and other countries.”

Still, Wardenclyffe grew, with guards under strict orders to keep visitors away. The wooden tower rose 187 feet over a wide shaft that descended 120 feet to deeply anchor the antenna. Villagers told The Times that the ground beneath the tower was “honeycombed with subterranean passages.”

The nearby laboratory of red brick, with arched windows and a tall chimney, held tools, generators, a machine shop, electrical transformers, glass-blowing equipment, a library and an office.

But Morgan was disenchanted. He refused Tesla’s request for more money.

Desperate, the inventor pulled out what he considered his ace. The towers would transmit not only information around the globe, he wrote the financier in July 1903, but also electric power.

“I should not feel disposed,” Morgan replied coolly, “to make any further advances.”

Margaret Cheney, a Tesla biographer, observed that Tesla had seriously misjudged his wealthy patron, a man deeply committed to the profit motive. “The prospect of beaming electricity to penniless Zulus or Pygmies,” she wrote, must have left the financier less than enthusiastic.

It was then that Tesla, reeling financially and emotionally, fired up the tower for the first and last time. He eventually sold Wardenclyffe to satisfy $20,000 (today about $400,000) in bills at the Waldorf. In 1917, the new owners had the giant tower blown up and sold for scrap.

Today, Tesla’s exact plan for the site remains a mystery even as scientists agree on the impracticality of his overall vision. The tower could have succeeded in broadcasting information, but not power.

“He was an absolute genius,” Dennis Papadopoulos, a physicist at the University of Maryland, said in an interview. “He conceived of things in 1900 that it took us 50 or 60 years to understand. But he did not appreciate dissipation. You can’t start putting a lot of power” into an antenna and expect the energy to travel long distances without great diminution.

Wardenclyffe passed through many hands, ending with Agfa, which is based in Ridgefield Park, N.J. The imaging giant used it from 1969 to 1992, and then shuttered the property. Silver and cadmium, a serious poison, had contaminated the site, and the company says it spent some $5 million on studies and remediation. The cleanup ended in September, and the site was put up for sale in late February.

Last month, Agfa opened the heavily wooded site to a reporter. “NO TRESPASSING,” warned a faded sign at a front gate, which was topped with barbed wire.

Tesla’s red brick building stood intact, an elegant wind vane atop its chimney. But Agfa had recently covered the big windows with plywood to deter vandals and intruders, who had stolen much of the building’s wiring for its copper.

The building’s dark interior was littered with beer cans and broken bottles. Flashlights revealed no trace of the original equipment, except for a surprise on the second floor. There in the darkness loomed four enormous tanks, each the size of a small car. Their sides were made of thick metal and their seams heavily riveted, like those of an old destroyer or battleship. The Agfa consultant leading the tour called them giant batteries.

“Look up there,” said the consultant, Ralph Passantino, signaling with his flashlight. “There’s a hatch up there. It was used to get into the tanks to service them.”

Tesla authorities appear to know little of the big tanks, making them potential clues to the inventor’s original plans.

After the tour, Christopher M. Santomassimo, Agfa’s general counsel, explained his company’s position: no donation of the site for a museum, and no action that would rule out the building’s destruction.

“Agfa is in a difficult economic position given what’s going on in the global marketplace,” he said. “It needs to maximize its potential recovery from the sale of that site.”

He added that the company would entertain “any reasonable offer,” including ones from groups interested in preserving Wardenclyffe because of its historical significance. “We’re simply not in a position,” he emphasized, “to donate the property outright.”

Ms. Alcorn of the Tesla Science Center, who has sought to stir interest in Wardenclyffe for more than a decade, seemed confident that a solution would be worked out. Suffolk County might buy the site, she said, or a campaign might raise the funds for its purchase, restoration and conversion into a science museum and education center. She said the local community was strongly backing the preservation idea.

“Once the sign went up, I started getting so many calls,” she remarked. “People said: ‘They’re not really going to sell it, are they? It’s got to be a museum, right?’ ”

Sitting at a reading table at the North Shore Public Library, where she works as a children’s librarian, Ms. Alcorn gestured across a map of Wardenclyffe to show how the abandoned site might be transformed with not only a Tesla museum but also a playground, a cafeteria and a bookshop.

Ms. Alcorn said the investigation and restoration of the old site promised to solve one of the big mysteries: the extent and nature of the tunnels said to honeycomb the area around the tower.

“I’d love to see if they really existed,” she said. “The stories abound, but not the proof.” 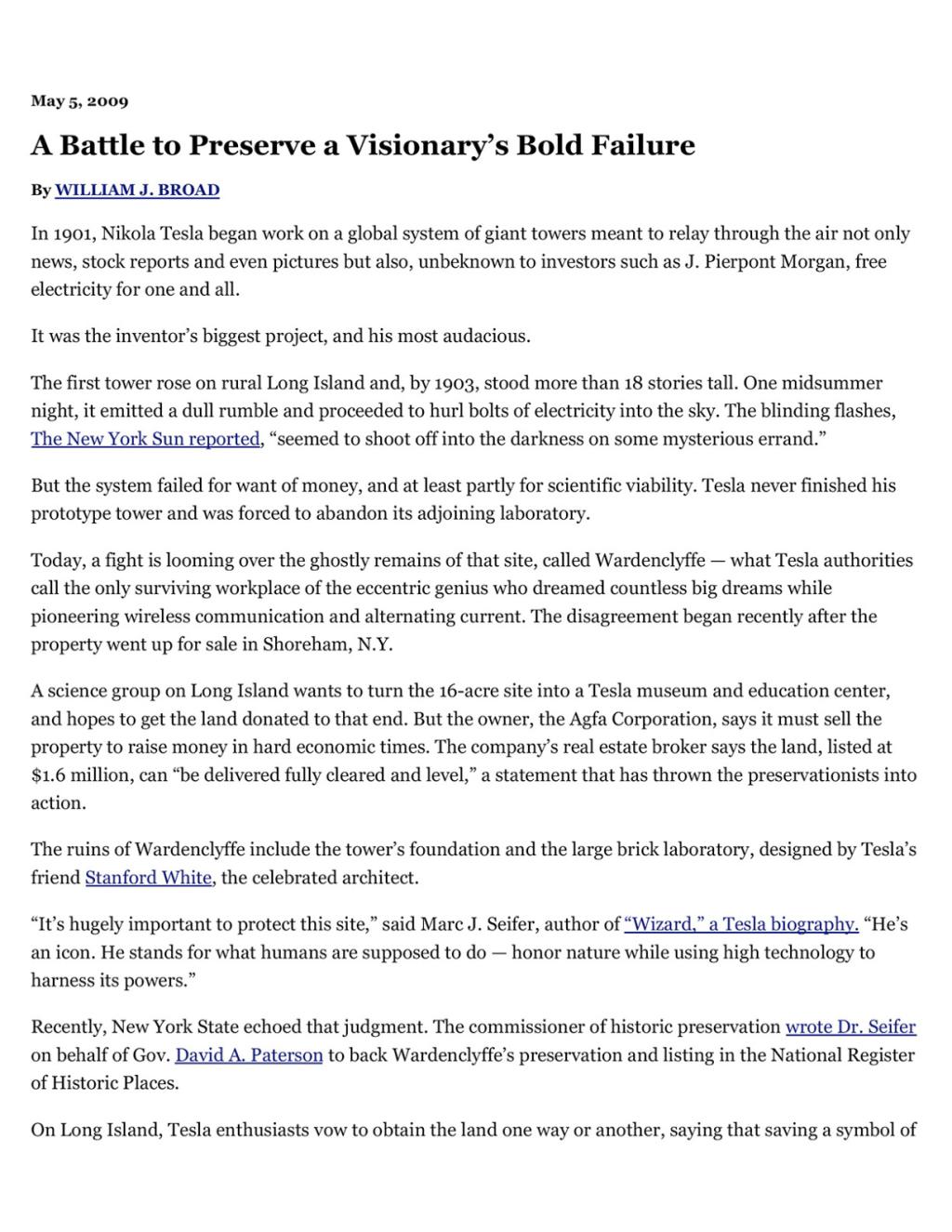