Impossible, He Says, for Other Experimenters to Note Effects Which He Has Discovered.

Have Not Proper Devices

Inventor Says with His Appliances He Can Observe Electrical Condition of 2,200 Miles.

No Doubt of Final Success

Nikola Tesla in his recent experiments in atmospheric electricity obtained results which he believes will make possible communication with the people of Mars. Scientific investigators abroad were sceptical as to his new theory. Professor Fleming, F. R. S., of University College, London, laughed outright at the idea. Mr. Marconi, who is experimenting in wireless telegraphy near Poole, attributed the alleged signals from Mars to local disturbances in the atmosphere.

Following is Mr. Teslaís reply to his critics and his explanation of his theory: -

“Having no exact knowledge of the means of investigation used by other experimenters, I cannot judge of the value of their observations. I assume that the same circuit arrangements and devices have been employed which are described in patents and articles on Hertzian telegraphy. In these cases an aerial conductor, not directly connected with the ground, but separated from it by imperfect contacts or coils which prevent the passage of the current, receives the effects transmitted from a distance.

“The atmospheric disturbances in these arrangements, if I am to judge from my own experience, are so great that I have always doubted their practical value. In my investigations these disturbing atmospheric influences were almost wholly excluded. It would have been impossible for other experimenters to note the effects which I have discovered, for with the Hertzian devices only a very narrow region can be explored, whereas I was able to observe the electrical condition of a large portion of the globe, a stretch of land 2,200 miles in width and breadth. That these actions are due to causes heretofore unknown I am convinced.

“I feel that I have not been led away by my imagination, but that my sight was true as ever before, and I am confident that future investigation will confirm my statement.

“Nor have I the slightest doubt, judging from my experiments and measurements, that with a properly constructed electrical oscillator an amount of energy can be transmitted to a planet, as Venus or Mars, even at their greatest distance, sufficient to bring into action a sensitive instrument, such as I have been using in my own observations.

“Furthermore, it is an error to believe that a great expenditure of power is necessary for interplanetary communication. What is needed is an effect specifically greatóan enormous rate of energy delivery, but lasting each time only a fraction of a second, so that the total power used up is small. Now, with my oscillator I can make this rate equal to five million horse power and more, if necessary, and my calculations show that a small fraction of this rate is amply sufficient for conveying a message to Mars.

“Heretofore light was the only known agent for communicating with a planet. It is easy to show that by its means such a result is virtually impossible, owing to the rapid diminution of energy with the distance and the impossibility of concentrating in an instrument the energy falling upon a large area. By the method and machinery I have devised we are enabled to convey an immeasurably greater amount of energy to the planet, and the observers there. Instead of utilizing in his instrument only an infinitesimal amount of the entire energy conveyed, can avail himself of a large portion of the same.

“A practical solution has thus been found both for transmitting and receiving messages, and we can only hope that there are beings as far advanced, and possibly further than we are ourselves. I see no harm in holding fast to this possibility. This thought cannot but make us better and give us a fresh interest in life.” 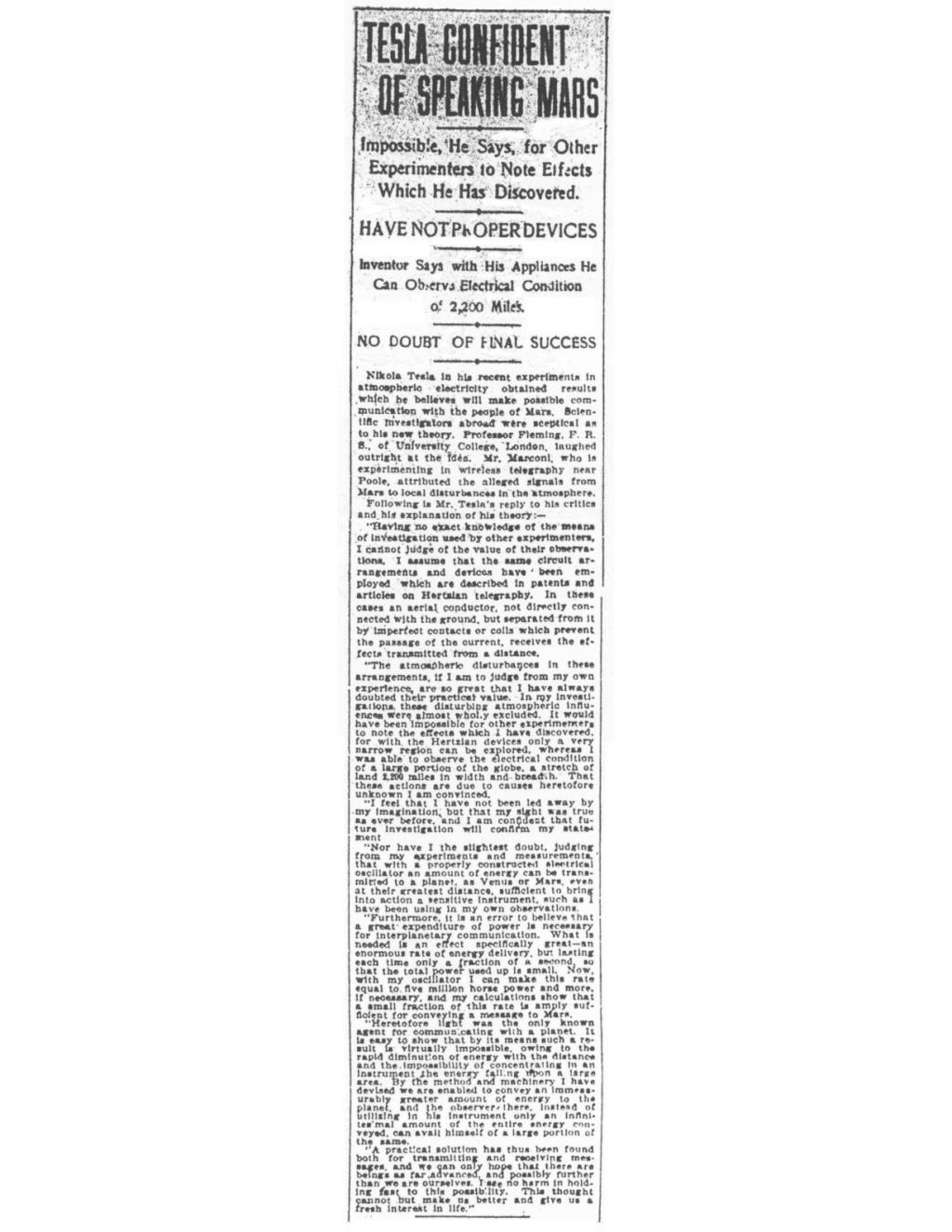