Tesla Describes an Interesting Feature of the X-Ray Radiations

The following observations, made with bulbs emitting Roentgen radiations, may be of value in throwing additional light upon the nature of these radiations, as well as illustrating better properties already known. In the main these observations agree with the views which have forced themselves upon my mind from the outset, namely, that the rays consist of streams of minute material particles projected with great velocity. In numerous experiments I have found that the matter which, by impact within the bulb, causes the formation of the rays may come from either of the electrodes. Inasmuch as the latter are by continued use disintegrated to a marked degree, it seems more plausible to assume that the projected matter consists of parts of the electrodes themselves rather than of the residual gas. However, other observations, upon which I can not dwell at present, lead to this conclusion. The lumps of projected matter are by impact further disintegrated into particles so minute as to be able to pass through the walls of the bulb, or else they tear off such particles from the walls, or generally bodies, against which they are projected. At any rate, an impact and consequent shattering seems absolutely necessary for the production of Roentgen rays. The vibration, if there be any, is only that which is impressed by the apparatus, and the vibrations can only be longitudinal.

The principal source of the rays is invariably the place of first impact within the bulb, whether it be the anode, as in some forms of tube, or an enclosed insulated body, or the glass wall. When the matter thrown off from an electrode, after striking against an obstacle, is thrown against another body, as the wall of the bulb, for instance, the place of second impact is a very feeble source of the rays.

These and other facts will be better appreciated by referring to the annexed figure, in which a form of tube is shown used in a number of my experiments. The general form is that described on previous occasions. A single electrode e, consisting of a massive aluminium plate, is mounted on a conductor c, provided with a glass wrapping w as usual, and sealed in one of the ends of a straight tube b, about five centimetres in diameter and 30 centimetres long. The other end of the tube is blown out into a thin bulb of a slightly larger diameter, and near this end is supported on a glass stem s a funnel f of thin platinum sheet. In such bulbs I have used a number of different metals for impact with a view of increasing the intensity of the rays and also for the purpose of reflecting and concentrating them. Since, however, in a later contribution, Professor Roentgen has pointed out that platinum gives the most intense rays, I have used chiefly this metal, finding a marked increase in the effect upon the screen or sensitive plate. The particular object of the presently described construction was to ascertain whether the rays generated at the inner surface of the platinum funnel f would be brought to a focus outside of the bulb, and further, whether they would proceed in straight lines from that point. For this purpose the apex of the platinum cone was arranged to be about two centimetres outside of the bulb at o.

When the bulb was properly exhausted and set in action, the glass wall below the funnel f became strongly phosphorescent, but not uniformly, as there was a narrow ring r r on the periphery brighter than the rest, this ring being evidently due to the rays reflected from the platinum sheet.

Placing a fluorescent screen in contact or quite close to the glass wall below the funnel, the portion of the screen in the immediate neighborhood of the phosphorescent patch was brightly illuminated, the outlines being entirely indistinct. Receding now with the screen from the bulb, the strongly illuminated spot became smaller and the outlines sharper, until, when the point o was reached, the luminous part had dwindled down to a small point. Moving the screen a few millimetres beyond o caused a small dark spot to appear, which widened into a circle and became larger and larger in the same measure as the distance from the bulb was increased (see S), until, at a sufficiently large distance, the dark circle covered the entire screen. This experiment illustrated in a beautiful way the propagation in straight lines, which Roentgen originally proved by pinhole photographs. But, besides this, an important point was noted; namely, that the fluorescent glass wall emitted practically no rays, whereas, had the platinum not been present, it would have been, under similar conditions, an efficient source of the rays, for the glass, even by weak excitation of the bulb, was strongly heated. I can only explain the absence of the radiation from the glass by assuming that the matter proceeding from the surface of the platinum sheet was already in a finely divided state when it reached the glass wall. A remarkable fact is, also, that, at least by a weak excitation of the bulb, the edges of the dark circle were very sharp, which speaks strongly against diffusion. By exciting the bulb very strongly, the background became brighter and the shadow S fainter, though it continued to be plainly visible even then.

From the preceding it is evident that, by a suitable construction of the bulb, the rays emanating from the latter may be concentrated upon any small area at some distance, and a practical advantage may be taken of this fact when producing impressions upon a plate or examining bodies by means of a fluorescent screen. 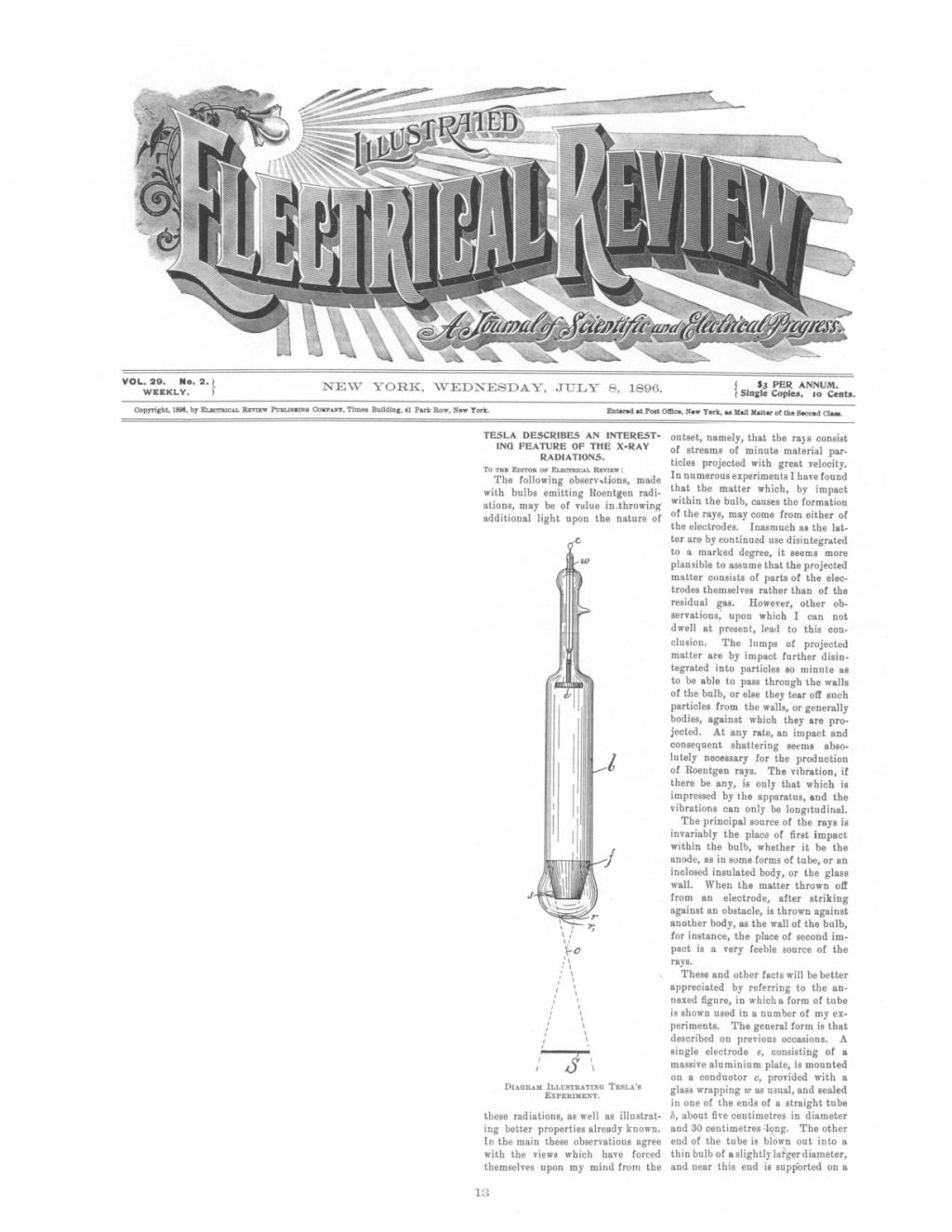