Tesla group's artifacts not among its assets

The Colorado Springs Pioneers Museum, the courts and numerous creditors would love to obtain some prized artifacts.

But there's one problem. Nobody seems to know the location of the contents of the former Nikola Tesla Museum of Science and Industry.

When the museum closed before its founders filed for bankruptcy in December, the contents collected to honor the late Colorado Springs inventor — vanished.

The tale of the demise of the museum is oddly reminiscent of that of Tesla himself, who, according to his own supporters, was a genius lacking the business sense to capitalize on his inventions.

While the museum delighted many who toured it, the founders, members of the International Tesla Society, didn't earn enough money to pay their bills, or so it seems.

“The facts are at best fuzzy,” said Paul Gefreh, a Colorado Springs attorney appointed to serve as a trustee in the bankruptcy case.

“There are some questions that are honestly there, but I don't think you're going to find out much. ... Everybody's going to point the finger at somebody else.”

Roy Thompson, president of Protocol Services and a creditor in the case, said the Tesla Society owes him roughly $14,000 for helping to plan and run its 1997 convention at the Sheraton Colorado Springs Hotel.

Thompson questioned the whereabouts of the money the society raised at that convention as well the funds earned from its membership fees.

“Where did all the money go?” Thompson asked. “That's the big question. Where did it all go?

The International Tesla Society filed for Chapter 7 bankruptcy on Dec. 9, 1998, reportedly listing its debts at roughly $71,000. The museum was reportedly locked by the landlord, according to the group's attorney, Robert Mason.

“A lot of people have called me,” Mason said.

“They're interested in saving it. I don't think it can be saved. ... It was too much of a debt to keep it going.”

In fact, the Pioneers Museum is still interested in the artifacts, if they're available.

The artifacts believed to be missing include notes, documents and an assortment of devices that demonstrated the inventor's notion of wireless electricity.

When he lived in the Springs at the turn of the century, Tesla proved the Earth could be used as a giant electrical conductor for the wireless transmission of power. Unfortunately, Tesla's main competitor was the celebrated Thomas Edison, a proponent of direct current electricity, the mode that would go on to power the world.

Although schools teach children about the genius of Edison, Tesla's work has gone relatively unnoticed. Hence, the formation in 1984 of the International Tesla Society, which celebrated the inventor with an annual convention as well as the creation of the museum, which was on East Bijou Street before it closed.

“I took my Cub Scouts through the museum six or seven years ago, and I was fascinated by it,” Gefreh said. “It was with a very heavy heart that I saw the name Tesla come across my desk as a bankruptcy.”

Tesla enthusiasts also have called the Pioneers Museum, hoping the artifacts could be put on display there. Consequently, Pioneers Museum officials have expressed interest in obtaining some objects.

The problem, of course, is finding them.

As part of his duty as a trustee, Gefreh set out to do that. All he could find, however, were some items moved to a local storage unit by one Tesla Society board member. He found nothing at the museum itself.

“Everything else disappeared,” Gefreh said.

“I contacted the landlord and said, ‘I want to make arrangements to get into the building.’ The response was, ‘They're out. There's nothing here.’”

In addition to the artifacts, Gefreh was looking for shelving, display cases, computer/equipment and anything else that could be sold.

However, all he could do was sell the items found in the storage unit to recoup some money for the creditors. The artifacts were sold this spring for about $5,000 to Better World Technologies, a New Jersey-based company that Gefreh thinks belongs to a former Tesla Society member.

The money hasn't been distributed yet, he said. “I will have to review the claims and determine if they're valid.”

The $5,000 won't go very far with more than 50 organizations on the list of creditors. The lack of capital also hampers Gefreh's ability to launch an investigation into what happened to the museum's artifacts.

“I think if I had a million dollars it might be time to say, ‘What happened to the other things?’ ... Not having that money, it then becomes a question of, ‘How much do you have to spend and how far does it go?’”

Getting to the bottom of the mystery hasn't been made any easier by the fact that the Tesla Society was in the midst of an interorganizational knock-down, drag-out fight at the time of its demise, according to Gefreh.

“I don't think this was ever a harmonious group of people,” he said.

Gefreh said the case will probably be closed by the end of the year, sans an explanation of where the artifacts went and why the society met such a puzzling end.

“The best.explanation that I have is the last couple of conventions they had cost them a lot of money to put on and they didn't earn the money,” he said.

The organization was also struggling to put out a magazine for members — and pay its rent as well.

Though the main creditor in the bankruptcy case questions whether The Tesla Society lost money on at least one of those conventions, he doesn't dispute the general feeling that the organization's demise was a loss.

“It's a shame because the Tesla organization is a good one, Tesla is a good inventor ... and the Tesla conventions were a wonderful forum for people to come with ideas,” Thompson said.

“They has some people who had some weird ideas, but they believed in what they were doing.” 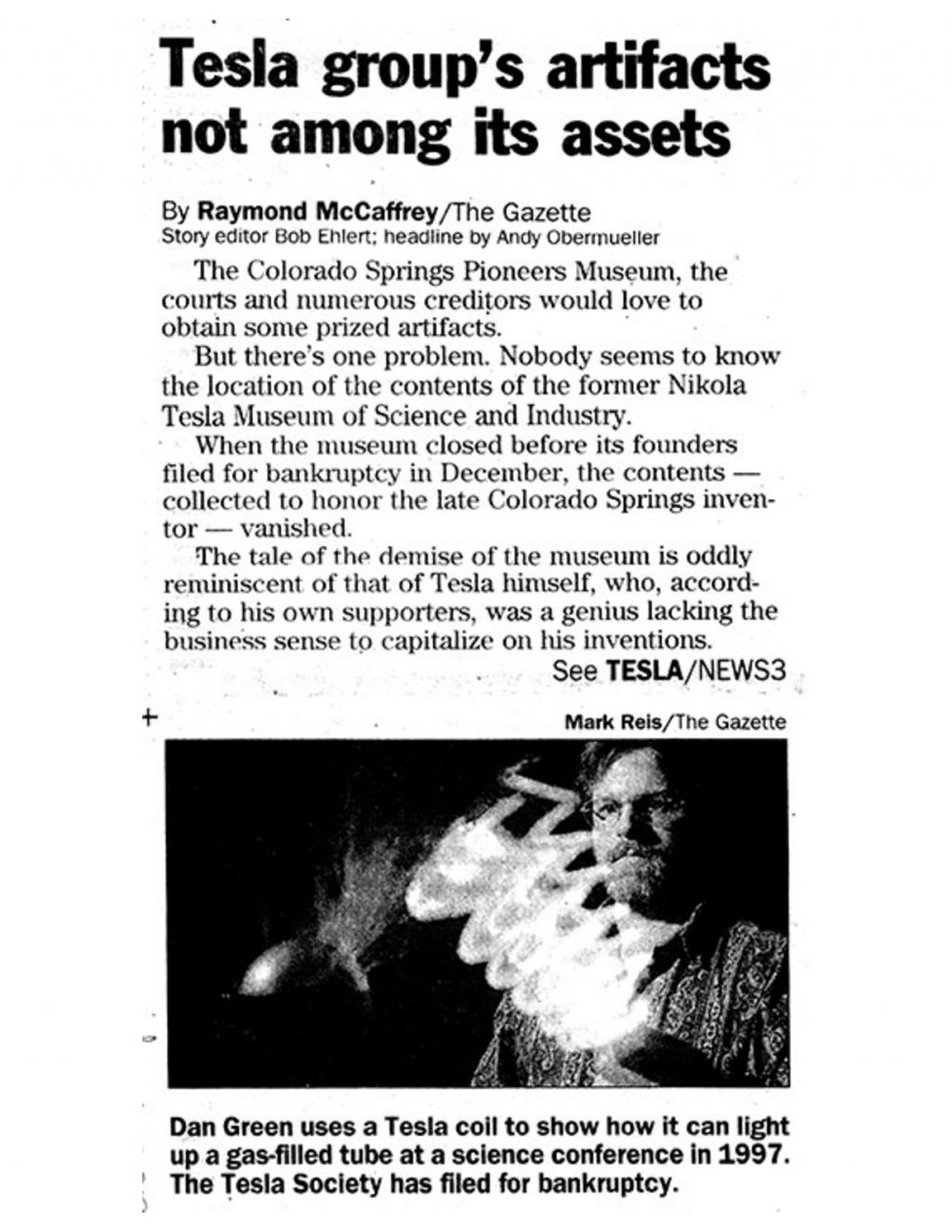