Since the introduction of the lightning rod over one hundred years ago by Benjamin Franklin, its adoption as a means of protection against destructive atmospheric discharges such as lightning bolts, has been practically universal. In a recent discussion on the subject of lightning protection, Dr. Nikola Tesla of New York, brings out many interesting facts not generally known concerning the real efficacy of the ordinary lightning rod as installed on houses, barns and public buildings all over the world.

Says, Dr. Tesla, “The efficacy of the ordinary lightning rod is to a certain degree unquestionably establisht thru statistical records, but there is generally a prevalent, nevertheless, a singular theoretical fallacy as to its operation, and its construction is radically defective in one feature, namely its typical pointed terminal.” In his new form of lightning protecting rod and terminal here illustrated, Tesla avoids all such points on the metal parts facing skyward, and uses an entirely different form and arrangement of terminals.

In permitting leakage into the air, the needle-shaped lightning rod is popularly believed to perform two functions: one to drain the ground of its negative electricity, the other to neutralize the positive electricity of the clouds. To some degree it does both. But a systematic study of electrical disturbances in the earth has made it palpably evident that the action of Franklin’s conductor, as commonly interpreted, is chiefly illusionary. Actual measurement proves the quantity of electricity escaping even from many points, to be entirely insignificant when compared with that induced within a considerable terrestrial area, and of no moment whatever in the process of dissipation. But it is true that the negatively charged air in the vicinity of the rod, rendered conductive thru the influence of the same, facilities the passage of the bolt. Therefore it increases the probability of a lightning discharge in the vicinity. The fundamental facts underlying this type of lightning-rod are: First, it attracts lightning, so that it will be struck oftener than would be the building if it were not present; second, it renders harmless most, but not all, of the discharges which it receives; third, by rendering the air conductive, and for other reasons, it is sometimes the cause of damage to neighboring objects; and fourth, on the whole, its power of preventing injury predominates, more or less, over the hazards it invites.

By contrast, Tesla’s new lightning protector is founded on principles diametrically opposite. Its terminal has a large surface. It secures a very low density and preserves the insulating qualities of the ambient medium, thereby minimizing leakage, and thus acting as a quasi-repellant to increase enormously the safety factor.

An understanding of but part of the truths relative to electrical discharges, and their misapplication due to the want of fuller appreciation has doubtless been responsible for the Franklin lightning rod taking its conventional pointed form, but theoretical considerations, and the important discoveries that have been made in the course of investigations with a Tesla wireless transmitter of great activity by which arcs of a volume and tension actually comparable to those occurring in nature were obtained, at once establish the fallacy of the hitherto prevailing notion on which the Franklin type of rod is based and show the distinctive novelty of this new lightning protector.

Practical estimates of the electrical quantities concerned in natural disturbances show, moreover, how absolutely impossible are the functions attributed to the pointed lightning conductor. A single cloud may contain several billion electric units, or more, inducing in the earth an equivalent amount, which a number of lightning rods could not neutralize in many years. Particularly to instance conditions that may have to be met, reference is made to an actual case (in 1904) wherein it appears that upon one occasion approximately 12,000 strokes occurred within two hours, all within a radius of less than 31 miles from the place of observation.

But altho the pointed lightning rod is quite ineffective in the one respect noted, it has the property of attracting lightning to a high degree, — first, on account of its shape and secondly, because it ionizes and renders conductive the surrounding air. This has been unquestionably establisht in long continued tests with the Tesla wireless transmitter above-mentioned, the inventor claims, and in this feature lies the chief disadvantage of the Franklin type of protector.

In Fig. A and Fig. B, different forms of such low density terminals and the arrangement of the same are illustrated. In Fig. A, there is a cast or spun metal shell of ellipsoidal outline, having on its under side a sleeve with a bushing of porcelain or other insulating material, adapted to be slipt tightly on a metal rod, which may be an ordinary lightning conductor. Fig. B shows another form of terminal made up of rounded or flat metal bars radiating from a central hub, which is supported directly on a metal rod and in electrical contact with the same. The special object of this type is to reduce the wind resistance, but it is essential that the bars have a sufficient area to insure small electro-static density, and also that they are close enough to make the aggregate capacity nearly equal to that of a continuous shell of the same outside dimensions. The general view of the building shows a cupola-shaped and earthed metal dome carried by a chimney, serving in this way the twofold practical purpose of hood and protector.

From the foregoing it will be clear that in all cases the new Tesla terminal prevents leakage of electricity and attendant ionization of the air. It is immaterial to this end whether it is insulated or not. Should it be struck the current will pass readily to the ground either directly or, as in Fig. A, thru a small air-gap between. But such an accident is rendered extremely improbable owing to the fact that there are everywhere points and projections on which the terrestrial charge attains a high density and where the air is ionized. Thus the action of the improved protector is equivalent to a repellant force. This being so, it is not necessary to support it at a great height, but the ground connection should be made with the usual care and the conductor leading to it must be of as small a self-induction and resistance as practicable. Tesla has taken out a patent on this new lightning protector. 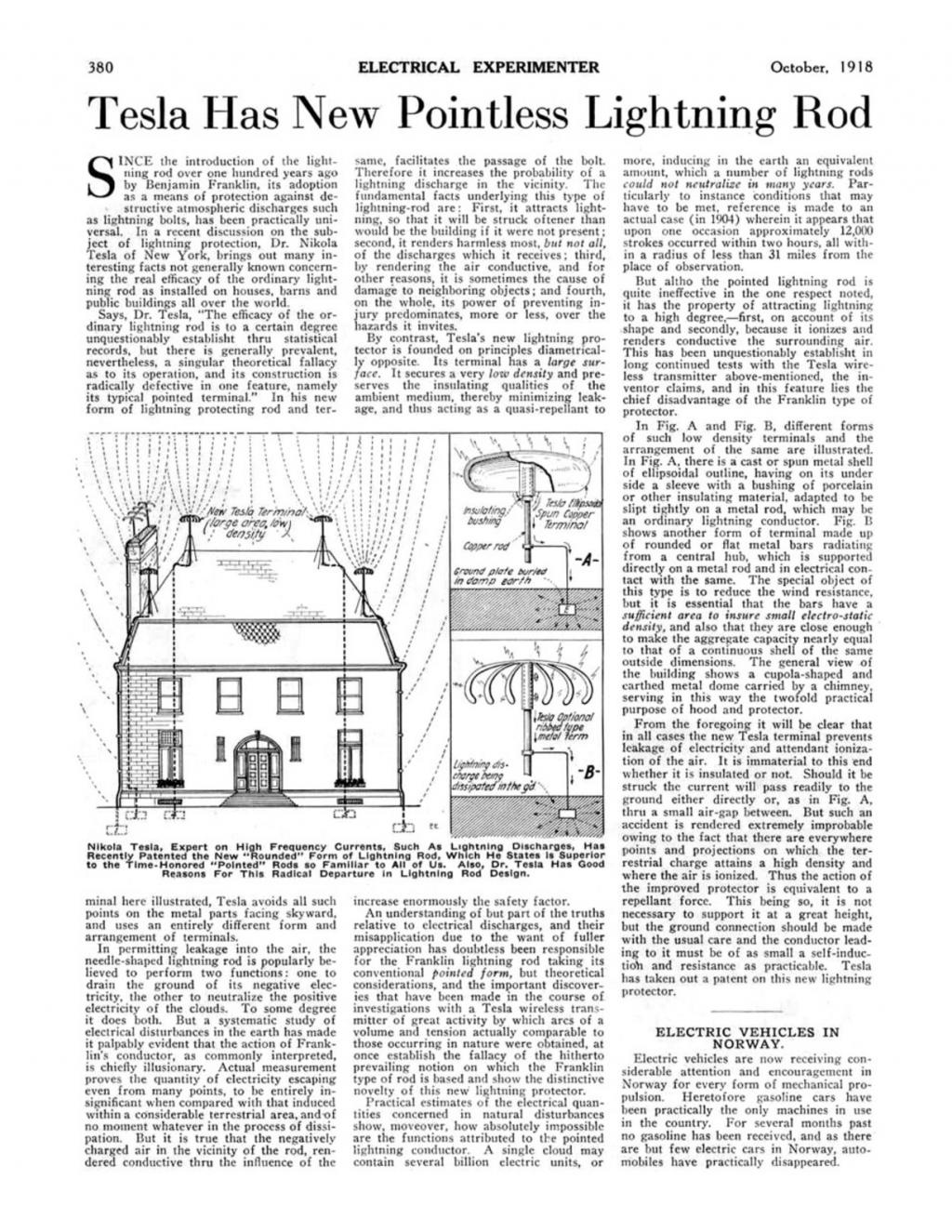