If we had been present just before the turn of the century at the New York laboratory of Nikola Tesla, we would have been privileged to witness a display of electrical wizardry rivalling any of the best lightning storms. Ever congenial, dapper and erudite, ingenious Tesla would be our tour guide, demonstrating to us the vast potentials of harnessing high-frequency, high voltage alternating current. A techno-dazzling array of coils, condensers, oscillators, glass tubes and wire loops festoon his laboratory. We would be fascinated and amazed by all this electrical apparatus ...

Tesla picks up an incandescent lamp that begins to glow by the energy of waves transmitted from a distance. We see no cords connecting one device with another. Then the inventor starts handling one of his coils, which is “miraculously” energized by the waves of a distant oscillator and adjusted to the capacity of the operator. He appears unruffled as the pressure on the coil nears half a million volts. Frequently, Tesla interposes himself between a high-potential oscillator and his illuminated tubes, and as charges surround him, his slender body emanates an eerie, luminescent aura. After a little while, he repeats a demonstration he once gave to Mark Twain - in it, he bathes the entire laboratory in a bright, sunlight color as we strain in vain to detect the hidden lamps we’re sure are there somewhere - but none are to be found. Such lighting is reminiscent of tales told by UFO abductees and contactees, who describe mysterious illumination aboard ET spaceships.

Who was this Tesla? Was he a mad scientist? Or was Nikola Tesla actually a farsighted meta-technician whose real genius has never been fully perceived by the world at large?

Tesla was born at the stroke of midnight, July 9-10 of 1856, the fourth son of a Serbian minister in Croatia (now Yugoslavia). From early youth, he had use of edetic memory. With disciplined training at home, he was able to memorize long passages of poetry or biblical verse. Tesla’s memory was more than just visually or aurally accurate; it teased his mind with playback images so real that he felt he could reach out and touch them. He considered this holographic projecting of his mental images an affliction. A more linear but equally fantastic ability helped him with math - like Howard Hughes, he could quickly add long columns of figures in his head. He also shared Hughes’ aversion to germs and was obsessed with cleanliness. Creative geniuses seem unusually sensitive to their environments!

Tesla used his extraordinary powers to visualize objects in space - and would actually design, build and test his extraordinary inventions before physical construction. He would mentally form an AC motor, watch it run and note the wear on bearings - all in his head.

He studied physics and mathematics at the Real Gymnasium in Gospic. Later, he is said to have studied electrical engineering at the Polytechnic Institute in Graz, Austria. It was there that he saw a demonstration of a Gramme machine - a kind of reversible dynamo-motor - and resolved to make a better machine that would be capable of running on AC current, and thus dispense with the inefficient sparking commutator.

“Tesla knew how to make the alternating current motor work. ‘Isn't it beautiful? Isn't it simple? My motor will set man free,’ he said. ‘It will do the work for the world.’”

One day while on a walk in Budapest with a close friend, Tesla was reciting lines from Goethe’s “Faust” when the idea of a rotating magnetic field burst on him in a sudden flash of truth. Instantly, Tesla knew how to make the alternating current motor work. “Can’t you see it right here in front of me, running almost silently?” he was to have asked his companion. “It is the rotating magnetic field that does it... Isn’t it beautiful? Isn’t it simple? My motor will set man free, it will do the work for the world.”

In 1884, Tesla came to America with only four pennies in his pocket, seeking work with the era’s current genius of DC electricity, Thomas Alva Edison, who was devoted to developing DC systems. But Tesla was enthusiastic about his AC discoveries, and so departed from Edison in 1891, filing over 40 patents on his complete AC system. These alternating current systems lie at the very foundation of America’s electric power industry, though Tesla’s name and reputation have faded into the background.

In 1899, Tesla began his famous experiments with the giant coil he’d invented - later called the Tesla coil - at a laboratory in Colorado Springs, Colorado. He was fascinated by the electrical storms that frequented the region, and it was here that he discovered that lightning striking the earth induces stationary waves within the earth’s crust. Tesla experimented with impressing oscillations onto the earth to produce stationary waves that would be reinforced each time a pulse returned from the antipodes (opposite extremities) of the earth. He frequently tested apparatus that he claimed carried currents of one thousand amperes, and electromotive forces of 20 million volts. Tesla would illustrate the principles of these stationary waves by likening them to echoes - the waves would rebound from the opposite side of the earth from their source of transmission with virtually undiminished force. Tesla once attached a pocket-sized oscillator to one of the steel beams supporting his laboratory, inducing earthquake-like vibrations so strong that he felt impelled to destroy the device with a hammer. But his biggest electrical coup occurred when he created 135-foot lightning bolts and thunder from a 200-foot mast at his Colorado Springs operation.

With this kind of power transmission, Tesla believed, a properly-tuned receiving antenna could tap into vast wave energy potential from virtually anywhere on earth. In Tesla’s World System, the earth itself would not only carry power to each region, but would convey signals for radio or navigation, If his system were employed today, the need for communication and navigation satellites would be abrogated.

Tesla’s ideas integrated into a fabulous vision of unlimited free energy. In an 1897 address he gave in Buffalo, New York, Tesla forthrightly presented his concept of providing more machinery and more power to reduce the world’s misery and poverty, He believed we would eventually have to evolve means of obtaining energy from stores which are forever inexhaustible; that electricity was a condition of the whirling ether, and that the energy existing in space was kinetic and could be tapped from any point in space. He even believed it fully possible for living beings to survive without food nourishment, instead deriving their energy for life functions directly from the ambient medium. Once he stated that a crystal is a living being, foreshadowing current discoveries and advocacy of crystal technology, in another timely reading of mankind’s dilemma, Tesla considered human ignorance the greatest resistance to human progress, that it acted as a stubborn retarding force.

Remotely controlled robots, so prominent in latter 20th century technology, were first developed by Tesla, and some say they contained tuning and receiving apparatus needed for radio. The early robots predated Marconi’s inventions by several years, yet Tesla said the waves he produced to control the robots were different than radio waves. This view is shared by a modern-day Tesla proponent named Eric Dollard, (see article, p. 18) has attempted to replicate some of Tesla’s results. Dollard claims the waves produced by Tesla’s apparatus were not electromagnetic, or hertzian waves, but were far faster and could be described as longitudinal and dielectric.

In yet another example of his prescient grasp of things, Tesla firmly believed in life on other planets. He claimed radio design could be used to signal inhabitants of the planet Mars, and proposed to accomplish this by using his magnifying transmitter to excite waves in the earth that would effectively carry the signals to the red planet. He even once thought he had intercepted coded signals from that planet. (See article, p. 17)

Tesla has served as an inspiration to many recent inventors. In 1986, an International Tesla Symposium was held at Colorado College in Colorado Springs, and was attended by many scientists, engineers and inventors. A lesser Tesla Symposium was held in October of the same year at the Integratron near Giant Rock, California. The Integratron is a huge domed building built by contactee George Van Tassel, who claimed to be inspired not only by Tesla, but by visitors from outer space. The device housed the world’s largest electrostatic generator constructed for certain experiments, but had never been operated prior to Van Tassel’s untimely death in the mid-’70s. It’s still unfinished. At the symposium, Eric Dollard constructed several pancake-type induction coils and oscillators to test their effects on evacuated incandescent bulbs. Like Tesla, he produced amazing organic-like streamers of light as he held the bulbs near one of his cylindrical coils. Many other experimenters displayed their own Tesla apparatus.

Perhaps a new era of invention awaits on the brink of a new millenium.

Tesla died in a New York hotel room on Jan. 7,1943. In that same year, a federal judge ruled Tesla to be the inventor of the radio, (though Marconi holds that honor in most people’s minds). Nikola Tesla’s farseeing dreams encompassed a distant future. His legacy may be in the hands of today’s young new electrical wizards, some of whom are working to bring the Tesla dream closer to reality.

Epilogue: In the archives of the Tesla Society, records indicate that Tesla’s papers, placed in storage shortly after his death, were ostensibly photographed by the FBI. Their current whereabouts are unknown. 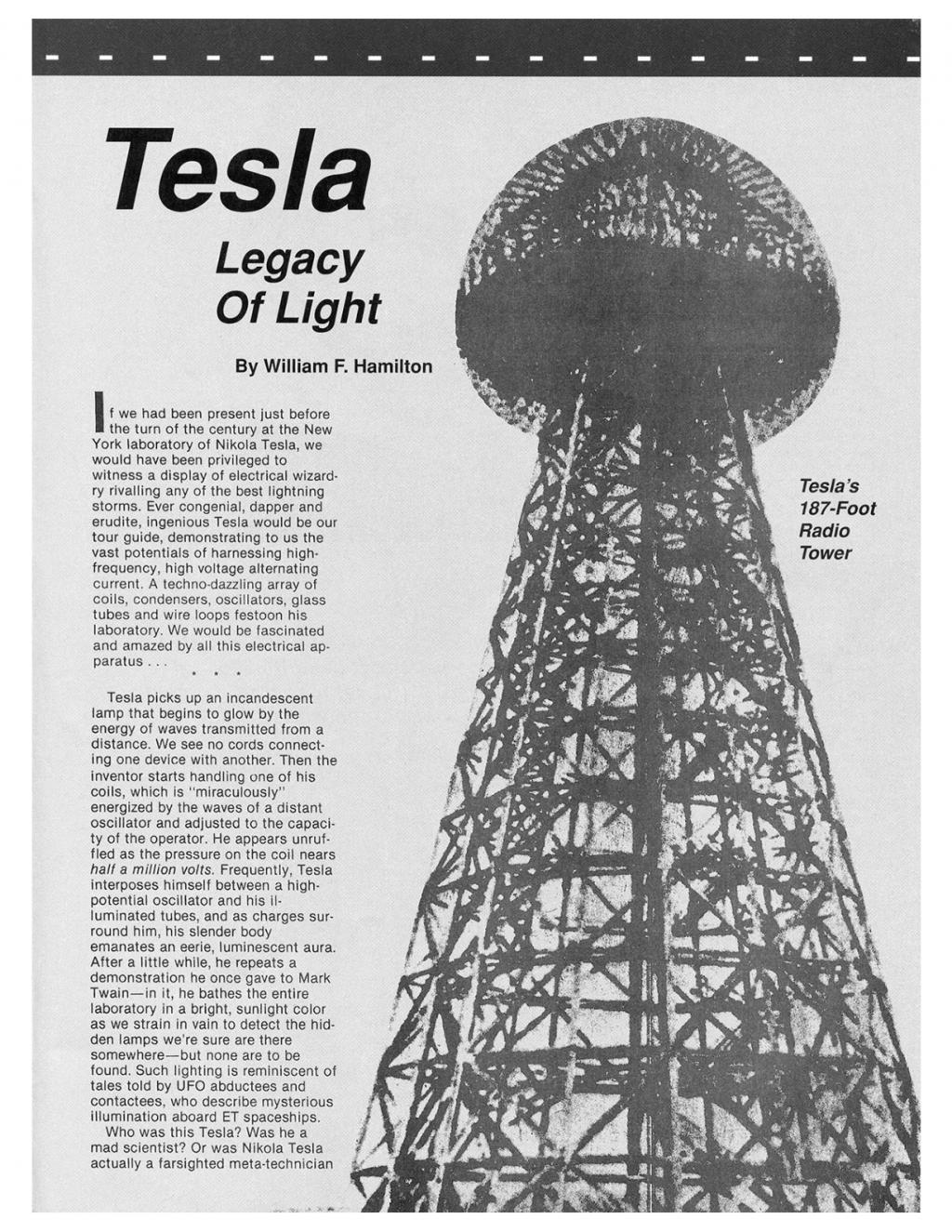