HAARP, or the High Frequency Active Auroral Research Program, is either:

A high-power, high-frequency, phased-array radio transmitter involved in several areas of pure scientific research principally targeted at examination of the peculiar phenomena known as the Northern Lights (the Aurora Borealis), and in developing solutions to radio and radar operations where uncontrollable events (solar flares or lightning) have created disturbances by heating the ionosphere.

A cover for the development of a “Cosmic Death Ray” capable of knocking out electrical power grids all around the world, destroying hostile incoming objects (ICBMs, planes, comets or UFOs), wiping out communications in a given area of the world with a massive highly-directed EMP (Electro Magnetic Pulse) and, when required, producing specific weather on demand for our generals.

You bet. But thoughtful folks are convinced that the genius behind HAARP is none other than the mysterious, long-dead Nikola Tesla; a Serb born in Smiljan, Croatia, in 1856, who both during and after his lifetime generated an enormous amount of speculation about the nature and uses of his technically advanced inventions.

Tesla invented the induction motor (the thing that powers machine tools and winches) while still in Yugoslavia, then came to America in 1884 where he invented radio (yep, Marconi lost the patent rights to Tesla in the U.S. Supreme Court in 1943); three-phase Alternating Current (which powers just about everything - not the DC invented by Thomas Edison); the Tesla Coil transformer (which runs your computer monitor, of which, more later); fluorescent lights; the solar electric cell; neon lighting - and much more. When he died broke - he was a terrible businessman - and in obscurity in New York City in 1943, he held over 700 patents.

But his most remarkable and controversial experiments were conducted in 1899 in Colorado Springs, Colorado. That year, a friend who owned the power company in Colorado Springs offered Tesla free electricity. Tesla had been thinking big and wondered what would happen if he generated an electrical charge and drained it into the ground. Rather than such a charge dissipating, Tesla reasoned that the ground and the earth’s molten core would actually act as excellent conductors of the electricity. He further surmised that the wave would pass 3,000 miles through the diameter of the earth at about 186,000 miles per hour (the speed of light), then bounce back to the point of origin 1/30th of a second later.

Tesla’s brilliant stroke was to say, “What would happen to the returning wave if I reinforce it with another charge (phasing) and drain it back into the ground, again and again?” To achieve these results, he conceived and built what has become known as a Tesla Coil, along with a 200-foot transmission antenna, then flipped the switch and ...zap! The first round-trip generated a six-foot lightning bolt from the antenna; as the cycle continued the bolt grew to 120 feet. The accompanying thunder was heard 22 miles away in Cripple Creek. The meadow where the lab was located was lit up by an eerie blue-light discharge (like St. Elmo’s fire). It all came to a halt when the power company’s generator caught fire and they shut Tesla’s power-feed off.

From the early 20th century to the 1940s, Tesla, short on cash, increasingly became a scientific speculator rather than an inventor. Among his other ideas was broadcasting electrical power directly from generator to receiver, without the use of wires. Modifying that concept slightly, he proposed what the New York Times called a Cosmic Death Ray, a focused, phased high-frequency signal that could be used to knock down unfriendly objects - like hostile bombers. Since electrical storms and ionospheric heat shifts are a causative factor in weather, Tesla speculated that the technology would also be useful for weather modification.

Interestingly, Tesla’s story took an even stranger turn after his death in 1943. The night he died, a relative (whom Tesla disliked and whom the FBI thought was too friendly with the Axis powers) broke into his hotel room and removed some of Tesla’s notebooks and papers. Over the next few days, Tesla’s remaining notebooks were examined by the government’s Custodian of Alien Property and photographed by some folks in naval uniforms and civilian clothes.

During the 1950s, ’60s and ’70s, Tesla became something of a cult figure in film and literature. Hollywood latched on to the image of the mad scientist working amidst mysterious tubes and coils, surrounded by electric discharges (a stock shot based on photographs of the inventor’s Colorado Springs lab). And speculative writers wondered in print as to the origins of Tesla’s genius. Margaret Storm, for example, proposed in her 1956 novel, Return Of The Dove, that Tesla was from Venus. Though Storm’s theory was never credible, Tesla had, in fact, picked up “strange rhythmic sounds” from space at Colorado Springs and was, himself, a firm believer in ETs.

Tesla, the man of legend and fact, resides in history largely as a brilliant but obscure electrical engineer, a Hollywood stock-model mad scientist so far out of his time that he makes for a convincing ET. His ideas, though, it should be emphasized, have in fact formed the basis of some of the military’s current weapons experiments. 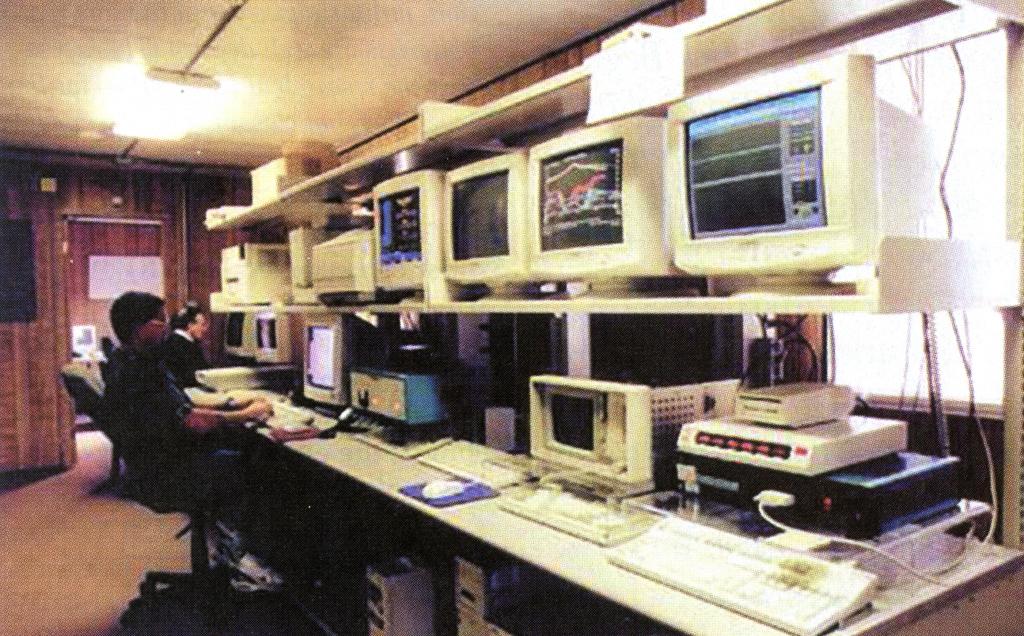 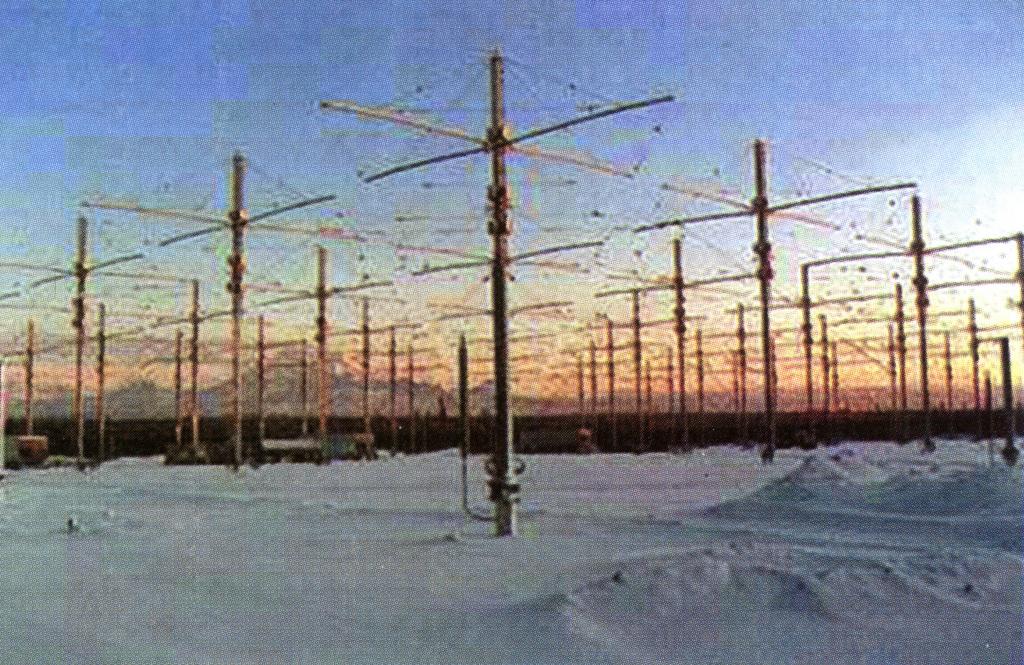 Tesla’s concepts formed the basis of a crucial invention by Bernard J. Eastlund. In the waning days of the Reagan administration, Eastlund was an engineer with the Atlantic Richfield Corporation (ARCO), developers of the North Slope oil and gas fields. He proposed patent number US4866605, “Method and apparatus for altering a region in the earth’s atmosphere, ionosphere, and or magnetosphere.” Buried in the small type at the end of the patent (under possible uses), Eastlund gets to matters of utmost interest to the military - knocking down satellites, ICBMs and planes, disrupting power and communications and even local weather modification.

Thoughtful folks are convinced that the genius behind HAARP is none other than Nikola Tesla.

Even though HAARP (which is a small version of the system Eastlund envisioned) is run by an ARCO spinoff called APTI, is stationed in Alaska (where he thought it should go), and is co-funded by the Air Force and Navy’s Office of Naval Research (remember our safe breakers), and is in essence a phased radio transmitter, the Defense Department claims the project has nothing to do with Tesla.

Eastlund himself contradicts this claim. In the “Other References” section of his patent (listing the intellectual precursors), Eastlund cites Liberty Magazine, Issue 2, Page 35, and two New York Times articles (December 8, 1915 and September 22, 1940). 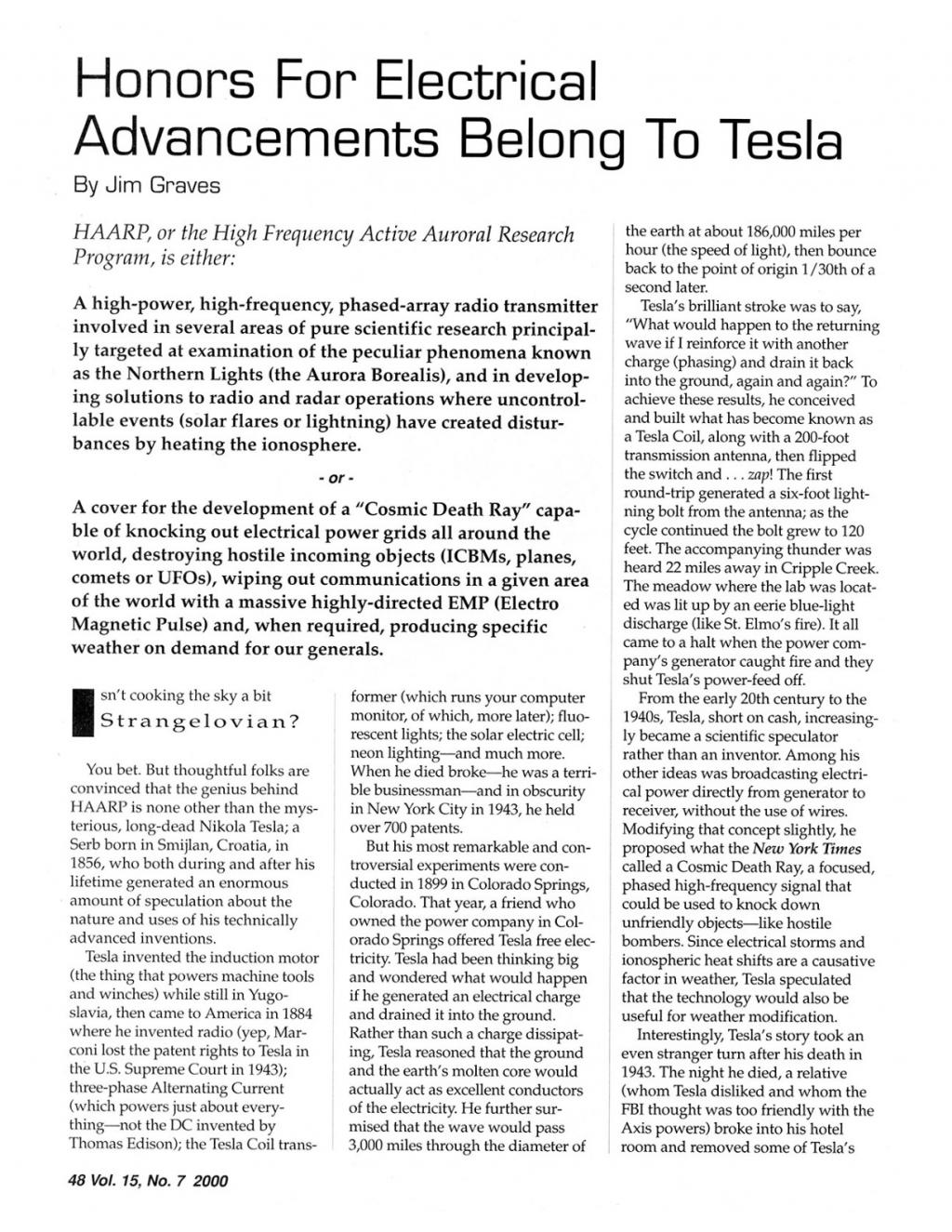