Corso on Tesla: Army R&D's View of the Self-Destructive Genius

A headliner in both UFO and standard military circles, the late Colonel Philip J. Corso was one of the few who gave Tesla his due, according to UFO Magazine’s publisher.

During the course of writing The Day After Roswell, Col. Corso and I had talked a lot about some of the great scientific thinkers who inspired the Army’s thinking about ways to assess what it discovered at Roswell in 1947. One of the most influential of these thinkers, at least from Col. Corso’s perspective, was Nikola Tesla, the inventor of alternating current and the scientist to whom a federal court in 1943 awarded the title of the “inventor of radio.”

Although he denied being a Tesla scholar himself, Col. Corso said he was fascinated by Nikola Tesla’s life because the man was one of the most inspired thinkers he’d ever read about. Corso said he felt a bond with Tesla because he understood what it meant to have true eidetic memory, the ability to hold an image in your mind as if it was really there, to turn it around and see it from all angles, and actually flip a switch on it to make it go so you can follow the process of the machine’s operation. All of this Tesla could do, because his mind could process information as if he were looking at a blueprint.

Thomas Edison, the great American inventor and founder of Westinghouse rival General Electric, found Tesla downright spooky and made fun of him every chance he could. Edison confided to his assistant Charles Batchelor that Tesla’s abilities were unnatural, a direct contrast and contradiction to Edison’s own “if you build it 100 times and fail 99 times you still have a success if, at the end of the process, it works.” Tesla, on the other hand, would sit at his desk and ruminate on the design until he built it perfectly in his mind. Then he built from the image. And that, reportedly, was how he first conceived of the alternating current generator that is still the basis of modern power-generating systems almost 60 years after Tesla’s death.

Tesla’s failure to make his mark on establishment technology was not for lack of trying. He had been actively trying to sell his advanced weapons ideas to the Navy and Army ever since World War I, but had been rebuffed by the Naval Research Board run by Thomas Edison in 1916 and again by the War Department during World War II. In fact, buried in General Nathan Twining’s files at the Air Materiel Command were portions of Tesla’s notes on directed particle beams that Office of Alien Property agents under the direction of the FBI seized from Tesla’s New York City hotel room the day after he died. They kept those papers, including the famous monograph, “New Art of Projecting Concentrated Non-Dispersive Energy Through Natural Media.”

Tesla's ideas of a Utopian society fueled by free energy and connected by free communications was anathema to American tycoons.

For an idea that the Army and Navy said would not work, the FBI, and in particular J. Edgar Hoover, showed unusually high interest. More importantly, not only was Nathan Twining interested in it enough to have a copy of it in his possession in November 1947, but one copy of the Tesla monograph made its way into the files of A.R.P.A. while another copy wound up in the files of Army R&D in 1961. That’s where Col. Corso came across it when he arrived at the Pentagon to work for Army R&D chief, Lt. General Arthur Trudeau.

Corso was also fascinated by Tesla because of the man’s capacity for self-destructive behavior. A dark, brooding Serbian, Tesla had an indomitable belief in himself that could sometimes be as much a curse as it often was a blessing. Tesla would not brook disagreement and could not understand why Westinghouse, Morgan, Astor, and other millionaire financiers could not see the benefits of what Tesla called “free energy,” the technology that beamed bolts of pure electrical energy from one point on the earth to another. What Tesla couldn’t see, Corso explained, was that neither Morgan nor Westinghouse was interested in free energy. Why would they be? They wanted it free for themselves or their companies, of course, but how could they charge for something that consumers could get for free?

Tesla, working in New York City during the age of the great industrialists, was a man way ahead of his time; his ideas of a Utopian society run by thinkers and fueled by free energy and connected by free communication was anathema to the tycoons whose complex financial strategies propelled America to its superpower status in the 20th century. (Today’s economy may be said to be a mirror image of this attitude in spades.) In the end, those who financed Tesla’s ideas and profited from them - making Tesla a millionaire himself - ultimately abandoned Tesla as a high-maintenance developer with ideas that were simply too expensive for his backers to bring to fruition. And what were they bringing to fruition? Simply a way to finance themselves out of business.

Why was Corso so intrigued by this? He explained that his experience in Army R&D in the years immediately after his former boss President Eisenhower had warned America of a “military industrial complex” had taught him that sometimes the only way to bring technology into mainstream development was to make sure it could make money for someone. General Trudeau had explained to him, Corso said, that his mandate from Strom Thurmond and other Congressional leaders was to take the alien technology the Army had recovered and route it through American industry so that no one could claim it wasn’t invented here. Trudeau had to play ball with American industries if he wanted the Army to harvest the weapons out of the cache of alien technology buried in its files. This was something both Trudeau and Corso understood. But it was something that Tesla was incapable of understanding, because he perceived industry, even though it financed him, as an exploiter profiting from the needs of humanity. This was ultimately his undoing, and he walked the streets of New York’s Chelsea neighborhood in obscurity during the middle years of World War II, his ideas for advanced weaponry already the subject of intense scrutiny by J. Edgar Hoover.

Despite a flawed, idiosyncratic personality, Tesla was another unheralded visionary, an altruist whose spirit was crushed by a venal society which nevertheless has readily exploited his ideas - without credit. 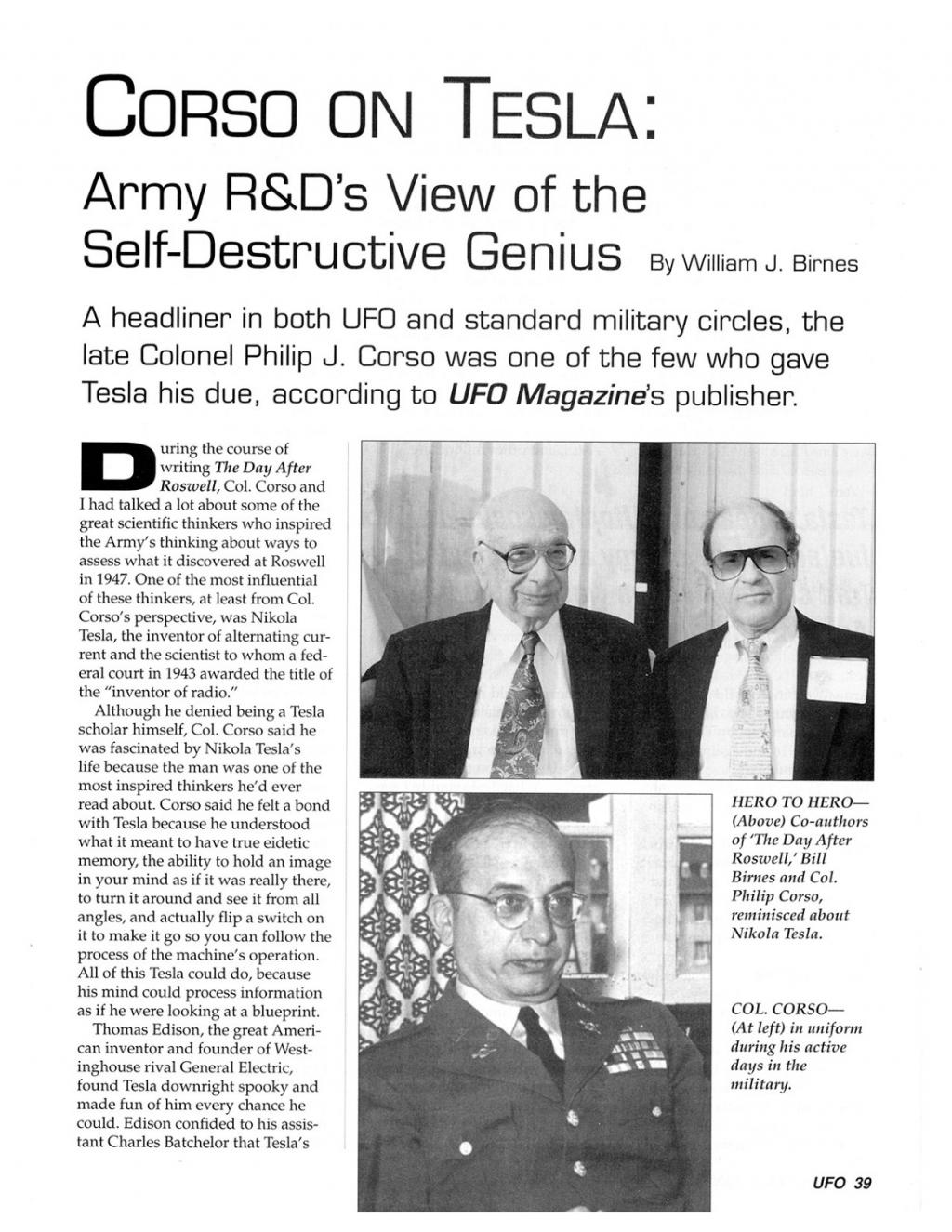