Application of Tubes of High Illuminating Power to Photography and Other Purposes.

A few years ago I began a series of experiments with a view of ascertaining the applicability of the light emitted by phosphorescent vacuum tubes to ordinary photography. The results soon showed that, even with a tube giving no more light than the equivalent of one half of a candle, objects could be easily photographed with exposures of a few minutes, and the time could be reduced at will by pushing the tube to a high candlepower. Photographs of persons were likewise obtained at that time and, if I am not mistaken, these were the first likenesses produced with this kind of illumination. However, a number of facts, not pertaining to the subject presently considered, were observed in the course of the experiments which, had they been immediately published, might have materially hastened important scientific developments which have taken place since. To dwell on these and other experimental results obtained at that time, more extensively at the first opportunity, is one of my good resolutions for the coming year. A calamity unfortunately, interrupted my labors for a short period, but as soon as I was able I took up again the thread of the investigation, which was not only interesting in connection with the principal object in view, but was also useful in many other respects. So, for instance, in making observations as to the efficiency or any peculiarity of the vacuum tubes, the photographic plate was found to be an excellent means of comparison, note being taken of the distance and time of exposure, character of the phosphorescent body, degree of rarefaction and other such particulars of the moment.

A rather curious feature in the photographs obtained with tubes of moderate illuminating power, as a few candles, was that the lights and shadows came out remarkably strong, as when very short exposures are made by flashlight, but the outlines were not sharp and practically no detail was visible. By producing tubes of much greater candlepower, a notable improvement in this respect was effected, and this advance prompted me to further efforts in this direction, which finally resulted in the production of a tube of an illuminating power of equal to that of hundreds, and even thousands, of ordinary vacuum tubes. What is more, I believe that I am far from having attained the limit in the amount of light producible, and believe that this method of illumination will be eventually employed for lighthouse purposes. This probably will be considered the oddest and most unlooked-for development of the vacuum tube.

Simultaneously with this progress a corresponding improvement was made in the efficiency of the light produced. A few words on this point might not be amiss, considering that a popular and erroneous opinion still exists in regard to the power consumed by vacuum tubes lighted by ordinary means. So deeply rooted is this opinion which, I will frankly confess, I myself shared for a long time, that, shortly after my own first efforts, Sir David Solomons and Messrs. Pike & Harris undertook to introduce in England such tubes on a large scale in competition with the incandescent system of lighting. The enterprise, which was commented on in the technical periodicals, was commendable enough, but it was not difficult to foretell its fate; for although the high-frequency currents obtained from the alternator yielded better economical results than interrupted currents, and although they were obtained in a convenient and fairly economical manner, still the efficiency of the whole system was necessarily too small for competition with incandescent lamps. The reason for the great power consumption, which may often be as much as 10 times that taking place in incandescent lamps for an equivalent amount of light, are not far to seek. A vacuum tube, particularly if it be very large, offers an immense radiating surface, and is capable of giving off a great amount of energy without rising perceptibly in temperature. What still increases the dissipation of energy is the high temperature of the rarefied gas. Generally it is supposed that the particles are not brought to a high temperature, but a calculation from the amount of matter contained in the tube, leads to results which would seem to indicate that, of all the means at disposal for bringing a small amount of matter to a high temperature, the vacuum tube is the most effective. This observation may lead to valuable uses of such tubes in astronomical researches, and a line of experiment to this end was suggested to me recently by Dr. Geo. E. Hale, of the Yerkes Observatory. As compared with these disadvantages the incandescent lamp, crude and inefficient as it undoubtedly is, possesses vastly superior features. These difficulties have been recognized by me early, and my efforts during the past few years have been directed towards overcoming these defects and have finally resulted in material advances, so that I find it possible to obtain from a tube of a volume not much greater than that of a bulb of an incandescent lamp, about the same amount of light produced by the latter, without the tube becoming overheated, which is sure to take place under ordinary conditions. Both of these improvements, the increase of candle-power as well as degree of efficiency, have been achieved by gradual perfection of the means of producing economically harmonical electrical vibrations of extreme rapidity. The fundamental principle involved is now well known, and it only remains to describe the features of the system in detail, a duty with which I expect to be able to comply soon, this being another one of my good resolutions.

The purpose of the present communication is chiefly to give an idea in how far the object here aimed at was obtained. The photographs shown were taken by a tube having a radiating surface of about two hundred square inches. The frequency of the oscillations, which were obtained from an Edison direct-current supply circuit, I estimated to be about two million a second. The illuminating power of the tube approximated about one thousand candles, and the exposures ranged from two to five seconds, the distance of the object being four to five feet from the tube. It might be asked why, with so high an illuminating power, the exposures should not be instantaneous. I would not undertake to satisfactorily answer this question, which was put to me recently by a scientific man, whose visit to my laboratory I still vividly recollect. Likenesses can, of course, be obtained with instantaneous exposures, but it has been found preferable to expose longer and at a greater distance from the tube. The results so far obtained would make it appear that this kind of light will be of great value in photography, not only because the artist will be able to exactly adjust the conditions in every experiment so as to secure the best result, which is impossible with ordinary light. He will thus be made entirely independent of daylight, and will be able to carry on his work at any hour, night or day. It might also be of value to the painter, though its use for such purposes I still consider problematical.

I anticipate that much detail will naturally be lost in the reproductions through the half-tone process and press work, however good, but I hope that enough will be shown to demonstrate the advantageous features of this light in photography and its practical usefulness in this art.

In conclusion, I wish to thank Mr. R. L. Newman for kindly consenting to the use of his photograph. 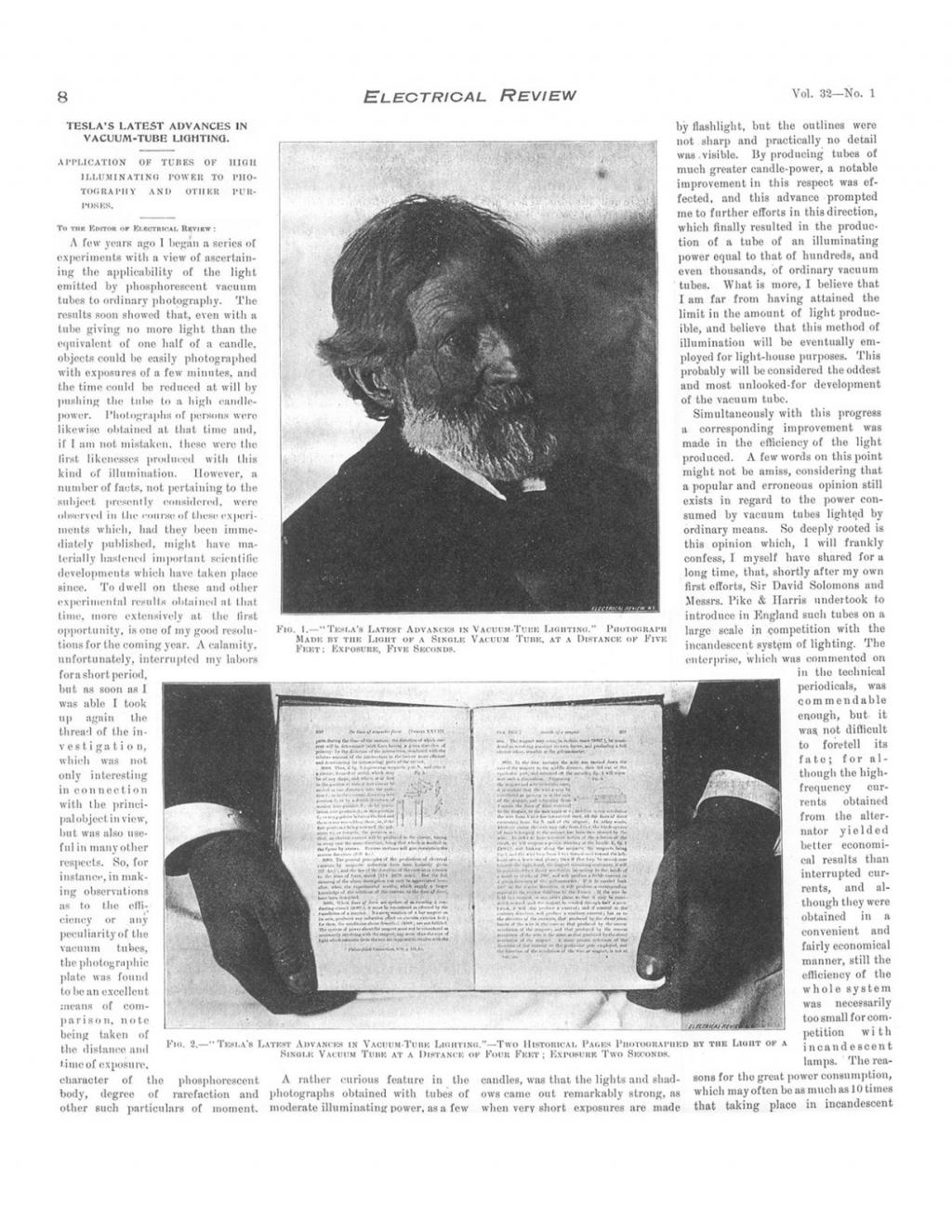