Capacity of Electrical Conductors is Variable

Not Constant, and Formulas Will Have to Be Rewritten - Capacity Varies With Absolute Height Above Sea Level, Relative Height From Earth and Distance From the Sun.

Nikola Tesla announced yesterday another new discovery in electricity. This time it is a new law and by reason of it, Mr. Tesla asserts, a large part of technical literature will have to be rewritten. Ever since anything has been known about electricity, scientific men have taken for granted that the capacity of an electrical conductor is constant. When Tesla was experimenting in Colorado he found out that this capacity is not constant — but variable. Then he determined to find out the law governing this phenomenon. He did so, and all, this he explained to The Sun yesterday. Here is what he said:

“Since many years scientific men engaged in the study of physics and electrical research have taken it for granted that certain quantities, entering continuously in their estimates and calculations, are fixed and unalterable. The exact determination of these quantities being of particular importance in electrical vibrations, which are engrossing more and more the attention of experimenters all over the world, it seems to be important to acquaint others with some of my observations, which have finally led me to the results now attracting universal attention. These observations, with which I have long been familiar, show that some of the quantities referred to are variable and that, owing to this, a large portion of the technical literature is defective. I shall endeavor to convey the knowledge of the facts I have discovered in plain language, devoid as much as possible of technicalities.

“Exactly as mechanics and engineers have taken it for granted that the pliability of the spring remains the same, no matter how it be placed or used, so electricians and physicists have assumed that the electrostatic capacity of a conducting body, say of a metallic sphere, which is frequently used in experiments, remains a fixed and unalterable quantity, and many scientific results of the greatest importance are dependent on this assumption. Now, I have discovered that this capacity is not fixed and unalterable at all. On the contrary, it is susceptible to great changes, so that under certain conditions it may amount to many times its theoretical value, or may eventually be smaller. Inasmuch as every electrical conductor, besides possessing an inductance, has also a certain amount of capacity, owing to the variations of the latter, the inductance, too, is seemingly modified by the same causes that tend to modify the capacity. These facts I discovered some time before I gave a technical description of my system of energy transmission and telegraphy without wires, which, I believe, became first known through my Belgian and British patents.

“In this system, I then explained, that, in estimating the wave-length of the electrical vibration in the transmitting and receiving circuits, due regard must be had to the velocity with which the vibration is propagated through each of the circuits, this velocity being given by the product of the wave-length and the number of vibrations per second. The rate of vibration being, however, as before stated, dependent on the capacity and inductance in each case, I obtained discordant values. Continuing the investigation of this astonishing phenomenon I observed that the capacity varied with the elevation of the conducting surface above the ground, and I soon ascertained the law of this variation. The capacity increased as the conducting surface was elevated, in open space, from one-half to three-quarters of 1 per cent per foot of elevation. In buildings, however, or near large structures, this increase often amounted to 50 per cent per foot of elevation, and this alone will show to what extent many of the scientific experiments recorded in technical literature are erroneous. In determining the length of the coils or conductors such as I employ in my system of wireless telegraphy, for instance, the rule which I have given is, in view of the above, important to observe.

“Far more interesting, however, for men of science is the fact I observed later, that the capacity undergoes an annual variation with a maximum in summer, and a minimum in winter. In Colorado, where I continued with improved methods of investigations begun in New York, and where I found the rate of increase slightly greater, I furthermore observed that there was a diurnal variation with a maximum during the night. Further, I found that sunlight causes a slight increase in capacity. The moon also produces an effect, but I do not attribute it to its light.

“The importance of these observations will be better appreciated when it is stated that owing to these changes of a quantity supposed to be constant an electrical circuit does not vibrate at a uniform rate, but its rate is modified in accordance with the modifications of the capacity. Thus a circuit vibrates a little slower at an elevation than when at a lower level. An oscillating system, as used in telegraphy without wires, vibrates a little quicker when the ship gets into the harbor than when on open sea. Such a circuit oscillates quicker in the winter than in the summer, though it be at the same temperature, and a trifle quicker at night than in daytime, particularly if the sun is shining.

“Taking together the results of my investigations I find that this variation of the capacity and consequently of the vibration period is evidently dependent, first, on the absolute height above sea level, though in a smaller degree; second, on the relative height of the conducting surface or capacity with respect to the bodies surrounding it; third, on the distance of the earth from the sun, and fourth, on the relative change of the circuit with respect to the sun, caused by the diurnal rotation of the earth. These facts may be of particular interest to meteorologists and astronomers, inasmuch as practical methods of inquiry may result from these observations, which may be useful in their respective fields. It is probable that we shall perfect instruments for indicating the altitude of a place by means of a circuit, properly constructed and arranged, and I have thought of a number of other uses to which this principle may be put.

“It was in the course of investigations of this kind in Colorado that I first noted certain variations in electrical systems arranged in peculiar ways. These variations I first discovered by calculating over the results I had previously noted, and it was only subsequently that I actually perceived them. It will thus be clear that some who have ventured to attribute the phenomena I have observed to ordinary atmospheric disturbances have made a hasty conclusion.” 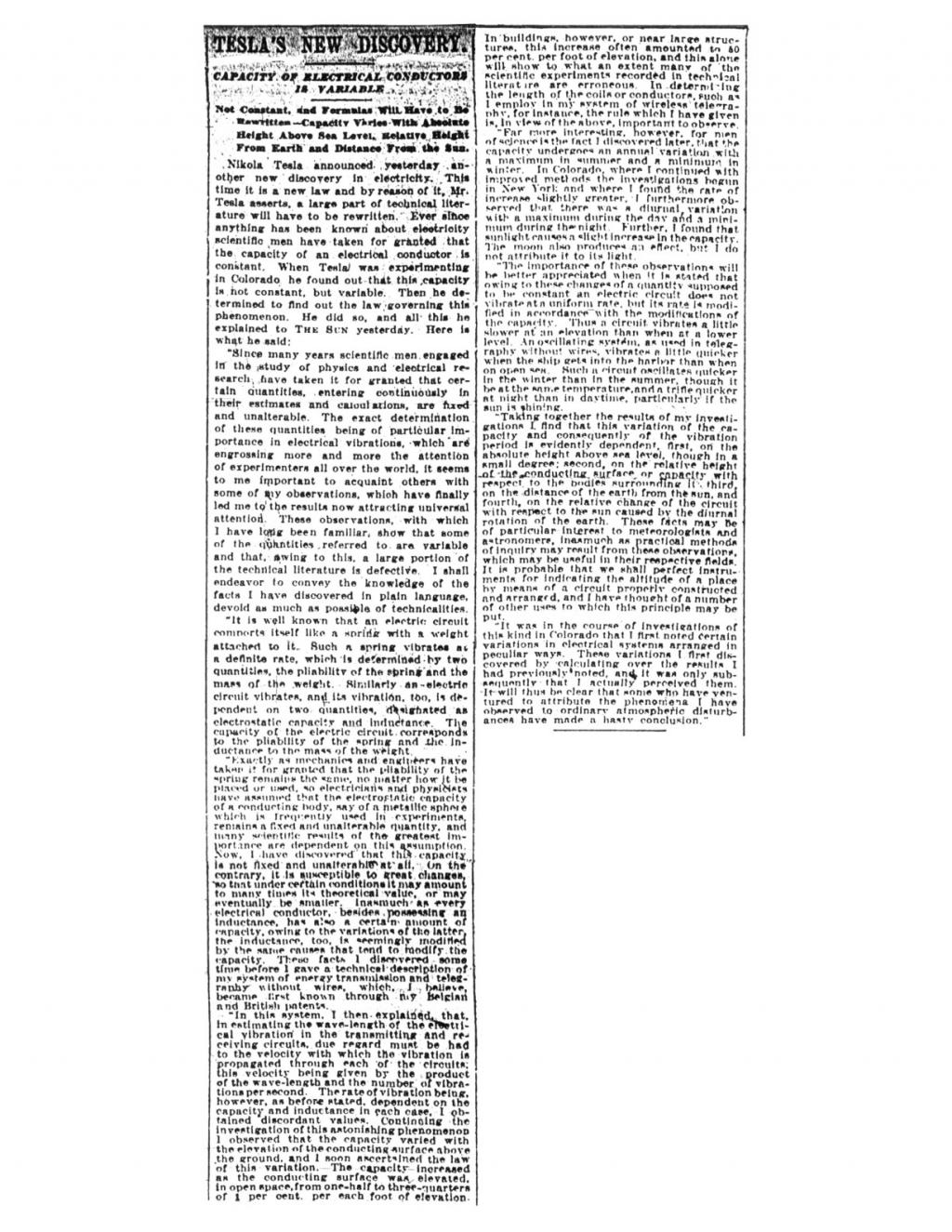