To The Editor of The New York Times:

Much has been said about Yugoslavia and its people, but many Americans may be under a wrong impression for political enemies and agitators have spread the idea that its inhabitants belong to different nations animated by mutual hate and held together against their will, by a tyrannical power. The fact is that all Yugoslavs-Serbians, Slavonians, Bosnians, Herzegovinians, Dalmations, Montenagrins, Croatians and Slovenes - are of the same race, speak the same language and have common national ideals and traditions.

At the termination of the World War, Alexander brought about a political union creating a powerful and resourceful State. This was hailed with joy by all the Slavs of the Balkans, but it took time before the people found themselves in the new conditions.

Serbs Did the Fighting.

I was born in Croatia. The Croatians and Slovenes were never in a position to fight for their independence. It was the Serbians who fought the battles for freedom and the price of liberty was paid in Serbian blood. All true Croatians and Slovenes remember that gratefully. They also know that the Serbians have an unequalled aptitude and experience in warfare and are best qualified to direct the forces of the country in a crisis.

Ever since united Yugoslavia came into being through Alexander's efforts, political enemies have done all they could to disrupt it by sowing seeds of discord and disseminating malicious reports. An instance of the kind is a book by Louis Adamic, "The Native's Return," which he is supposed to have written under the provisions of the Guggenheim award for literature and in which he indulges in political defamation, denunciation of the ruler of the country and promulgation of ideas as unwelcome here as in Yugoslavia.

His denunciations of the King and reflections on his character can be contemptuously passed, but one thing cannot be ignored. The book contains statements representing the great and fearless man, who has led his people in sanguinary battles, as a weakling in mortal fear of assassination, so much so that he retired every night to a different room and did not show himself until hundreds of his aides had 'I cleared the place and made safe his appearance. This has cut deep into the heart of every loyal Yugoslav.

Mr. Adamic is very loud in telling of the hatred and dissensions between Croatians and Slovenes and the Serbians, but recent events have disproved his statements, The countries, which according to his accounts ,. should be in open revolt, have shown themselves as devoted to the King of Serbia. This has been reflected in several reports of The New York Times, among which is the extraordinarily vivid and dramatic description of the obsequies.

The death of the King has shaken the country to its very foundations, but the enemies who say that it means the disruption of Yugoslavia will hope in vain, for the noble blood of the great man has only served to cement its parts more firmly and strengthen the national structure. Alexander will live long in the memory of his people, a heroic figure of imposing stature, both the Washington and Lincoln of the Yugoslavs; like Washington an able and intrepid general who freed his country from oppression; like Lincoln a wise and patriotic leader who suffered martyrdom. 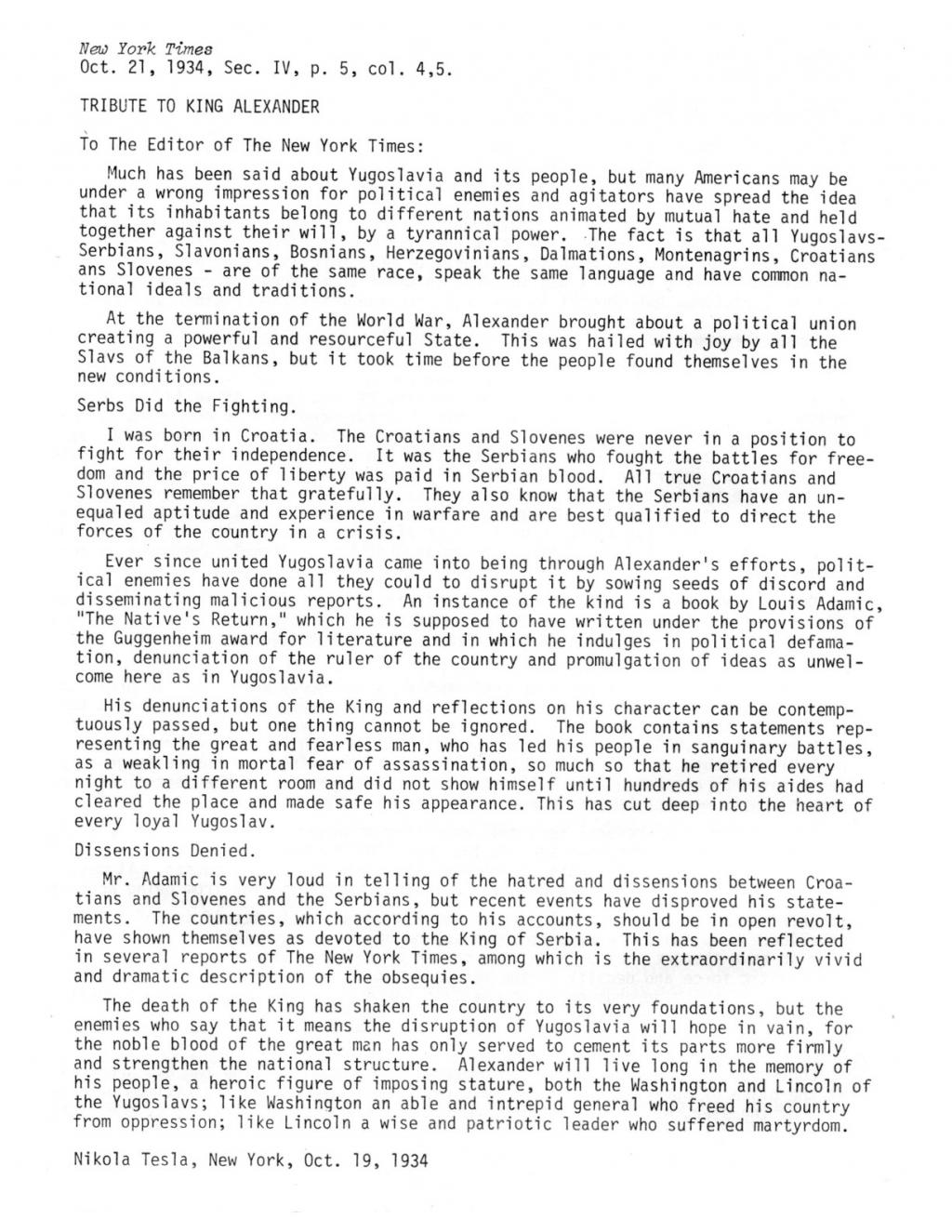