Our American contemporaries, in their issue of October 27, have described the Westinghouse system and factory. The Westinghouse Company controls a number of very valuable patents, and, as is well known, promises to be one of the most successful companies in the States. We hear that from time to time it is their intention to turn their attention towards developing a business in England. Whether this is the case or not the future will decide. One of the most interesting pieces of apparatus controlled by the company is the Tesla motor. We quote the remarks made by our New York contemporary, the Electrical Review, on this machine:

“The alternating current motor consists of a series of field-magnets, wound with two sets of coils, the ends of which are connected to binding posts conveniently located for attachment to the supply circuit. These binding posts form the only connection with the current, which current is taken from the regular lighting circuits, with the addition of a single return wire. This return wire makes it possible to send two alternating currents through the field of the motor at the same time, the pulsations of the two currents being similar, but not simultaneous. The resultant of these two currents is that a rapidly rotating polarity is given to the field, corresponding in period to that of the current producing it.

“The armature is in appearance similar to the ordinary Siemens drum armature, without the commutator. The winding is, however, much simpler, and consists of a few turns of comparatively small wire, the ends of which, instead of being carried out to a collecting ring, or any other form of sliding contact, are soldered together, forming a closed circuit, having no connection with the energising current. The alternating currents in the field induce secondary currents in the armature, and by the attraction between these and the revolving polarity of the field rotation is produced, the rate of rotation corresponding very nearly with that of the field.

“When no work is being done by the motor, the synchronism is exact or nearly so, and very little current passes either through the armature or field, but as load is put on and the work increases, the armature tends to lag slightly, causing the passage of more current in proportion to the work done. The reaction between the armature and the field is similar to that between the primary and secondary coils of a converter, and the increase of load on the motor causes increased supply of current in a manner exactly as takes place when lamps are added to the secondary circuit of a converter. The addition of the return wire for the motor circuit can be made easily so as to adapt existing lighting circuits to motor work, and the armature of the dynamo used for driving motors is equally available for lighting purposes.

“By an ingenious adaptation of the converter principle, this motor may be regulated in speed and reversed in its direction of motion without the use of switches or resistance coil. The method of operation is exactly similar to the link reversing gear of a locomotive. The extreme position of the reversing lever in one direction corresponds to full speed ahead, from which it can be graduated through every shade of intermediate speed to the reversing point, and from that on to full speed backwards. This is more readily accomplished owing to the absence of brushes, since there can be no sparking or wear due to the passage of current under any circumstances. No attention need be given to the motor beyond the filling and cleaning of the oil cups.

“The alternating motor is more compact than the direct current motor, and lighter in proportion to the power delivered. It can be served either through a converter or directly from the primary circuits. The connections may be so protected that no inconvenience or danger can possibly result from direct connection to high-tension service, should such become desirable. As there are no sliding contacts, and the binding posts need never be touched, or even exposed in any way, the use of a high-tension current becomes possible. The extreme simplicity of the winding and general construction of this motor, makes it very unlikely to get out of repair. The insulation of the armature is of no importance, since the current traversing it is never but a few volts, and often less than one volt, regardless of the voltage of the supplying circuits. Absolutely no electrical knowledge is required in its operation, and the connections to the circuit are so simple that anyone of ordinary intelligence can make them with ease and certainty. The alternating current motor is therefore thoroughly practical for manufacturing, commercial, and domestic use in the hands of servants.” 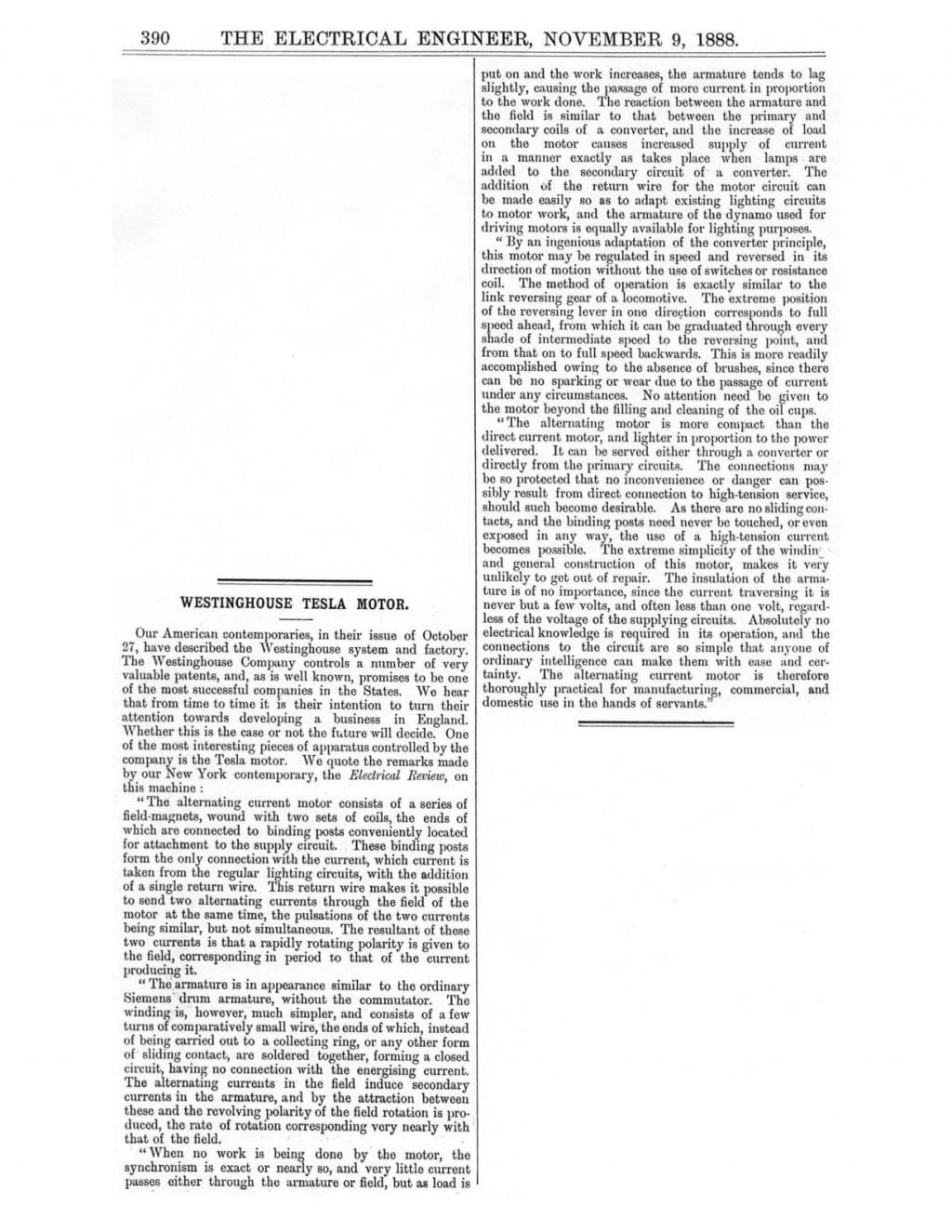