Of all the forms of nature’s all-pervading energy, which, ever changing and ever moving, like a soul animates the inert universe, those of electricity and magnetism are perhaps the most fascinating. The effects of gravitation, of heat, and light we observe daily, and soon we get accustomed to them, and soon they lose for us the character of the marvelous and wonderful; but electricity and magnetism, with their singular relationship, with their seemingly dual character, unique among the forces in nature, with their phenomena of attractions, repulsions, and rotations, stimulate and excite the mind to thought and research. We are now confident that electric and magnetic phenomena are attributable to ether; and we are, perhaps, justified in saying that the effects of static electricity are effects of ether under strain, and those of dynamic electricity and electro-magnetism effects of ether in motion. But this still leaves the question, as to what electricity and magnetism are, unanswered. First, we naturally inquire, is there such a thing as electricity? In interpreting electric phenomena, we may speak of electricity or of an electric condition, state, or effect. If we speak of electric effects, we must distinguish two effects opposite in character, and neutralizing each other. In a medium of the properties of ether we cannot exert a strain or produce a displacement or motion of any kind without causing in the surrounding medium an equivalent and opposite effect. But if we speak of electricity, meaning a thing, we must, I think, abandon the idea of two electricities. For how can we imagine that there should be two things, equivalent in amount, alike in their properties, but of opposite character, both clinging to matter, both attracting and completely neutralizing each other? If there is such a thing as electricity, there can be only one such thing, and excess and want of that one thing, possibly, though more probably its condition, determines the positive and negative character. Still, in spite of this, the theory of the two electricities is generally accepted, as it apparently explains electric phenomena in a more satisfactory manner. But a theory which explains better the facts is not necessarily true.

What, of all things, the existence of which we know, have we the best reason to call electricity? We know that it acts like an incompressible fluid; that there must be a constant quantity of it in nature; that it can be neither produced nor destroyed; and that electric and ether phenomena are identical. The idea at once suggests itself, therefore, that electricity might be ether. I must confess that I cannot believe in two electricities, much less in a doubly constituted ether. Electricity cannot be called ether in the broad sense of the term; but nothing would seem to stand in the way of calling electricity ether associated with matter - bound ether; or, in other words, that the so-called static charge of the molecule is ether associated in some way with the molecule. Looking at it in that light, we would be justified in saying that electricity is concerned in all molecular action. Now, precisely what the ether surrounding the molecules is, wherein it differs from ether in general, can only be conjectured. It cannot differ in density, ether being incompressible; it must, therefore, be under some strain or in motion, and the latter is the more probable. To understand its functions it would be necessary to have an exact idea of the physical construction of matter.

But of all the views of nature the one which assumes one matter and one force, and a perfect uniformity throughout, is the most scientific and the most likely to be true. An infinitesimal world, with the molecules and their atoms spinning and moving in orbits in much the same manner as celestial bodies, carrying with them ether, which is probably spinning with them - in other words, carrying with them static charges - seems to my mind the most probable view; one which in a plausible manner accounts for most of the phenomena observed. The spinning of the molecules and their ether sets up ether tensions or electrostatic strains; the equalization of ether tensions sets up ether motions or electric currents, and the orbital movements produce the effects of electro and permanent magnetism. About fifteen years ago Professor Rowland demonstrated a most interesting and important fact, namely, that a static charge carried around produces the effects of an electric current. We can conceive lines or tubes of force which physically exist, being formed of rows of directed moving molecules; we can see that these lines must be closed; that they must tend to shorten and expand, etc. It likewise explains in a reasonable way the most puzzling phenomenon of all, permanent magnetism, and, in general, has all the beauties of the Ampere theory without possessing the vital defect of the same, namely, the assumption of molecular currents. Without enlarging further upon the subject I would say that I look upon all electrostatic current and magnetic phenomena as being due to electrostatic molecular forces.

We are whirling through the endless space with inconceivable speed; all around us everything is spinning, everything is moving, everywhere is energy. There must be some way of availing ourselves of this energy more directly. Then, with the light obtained from the medium, with the power derived from it, with every form of energy obtained without effort, from the store forever inexhaustible, humanity will advance with giant strides. The mere contemplation of these magnificent possibilities expands our minds, strengthens our hopes, and fills our hearts with supreme delight. 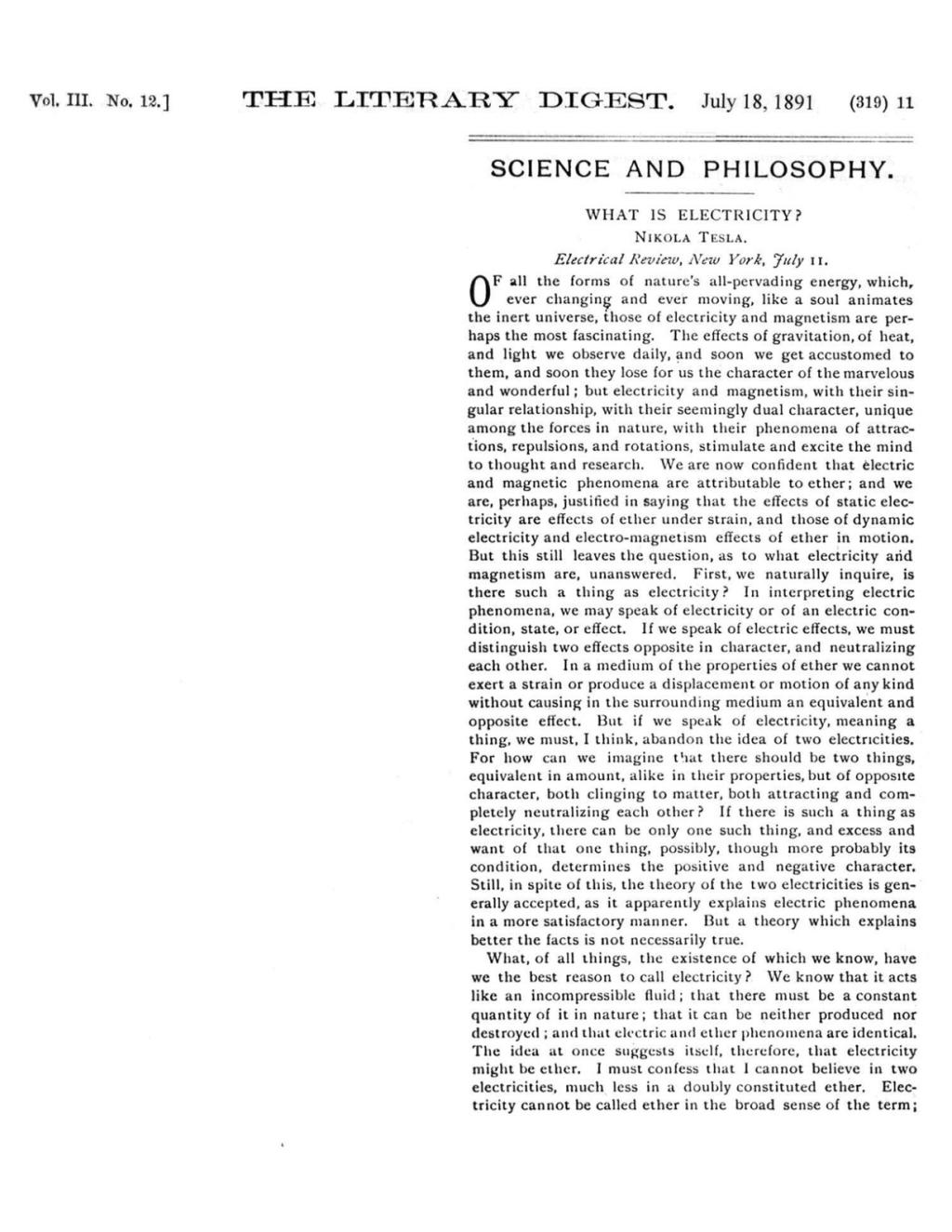