In the accompanying engravings are illustrated two types of improved lamps invented by Mr. Tesla, and designed for use in his recently patented system of incandescent electric lighting by means of high frequency currents. The lamp shown in Fig. 1 is designed for direct connection with a circuit or source of current; that shown in Fig. 2 is designed for inductive connection with a source of current. In the device illustrated in Fig. 1, A represents a highly vacuous glass globe, in which are sealed conductors, B, C, united with two pieces of carbon G, the joint being surrounded with bronze powder E to effect good connection. The cups surrounding the joint are filled with insulating plugs F of fire-clay. The exhaustion is carried to the highest possible point. Inasmuch as there is a tendency to sparking when the current is turned on before the exhaustion has been carried very high, the ends of the carbon are caused to approach in order that the sparks may leap across between such currents, thus lessening the danger of injury to the carbons. The distance apart of the carbons in the lamp is beyond sparking distance in the vacuum. The system in which this lamp is used, described in a late issue of the Review, consists of disruptively discharging the accumulated energy of a condenser through a primary circuit to produce a current of very high frequency, and then utilizing this primary circuit to induce in a secondary a current of very much higher potential.

In Fig. 2 the carbons are not connected directly to the leading-in circuit, but are inductively connected therewith by a condenser-like arrangement. One form of such a lamp was described in the Electrical Review. J J are plugs of fire-clay contained in the extensions B, B1 of the lamp.

The conductors G G are supported by these plugs and connected by metallic strips M with the condenser-coatings K K1. Over the outside of the stems B B1 are fitted insulating caps N N1, having metallic linings O O1, with terminals adapted for connection with the circuit wires. It will thus be seen that the carbons are out of contact with the supply conductors, and can only be acted upon inductively thereby. The incandescence to which the carbons are raised is supposed to be due to the heat developed by the rapid charge and discharge of the condenser. 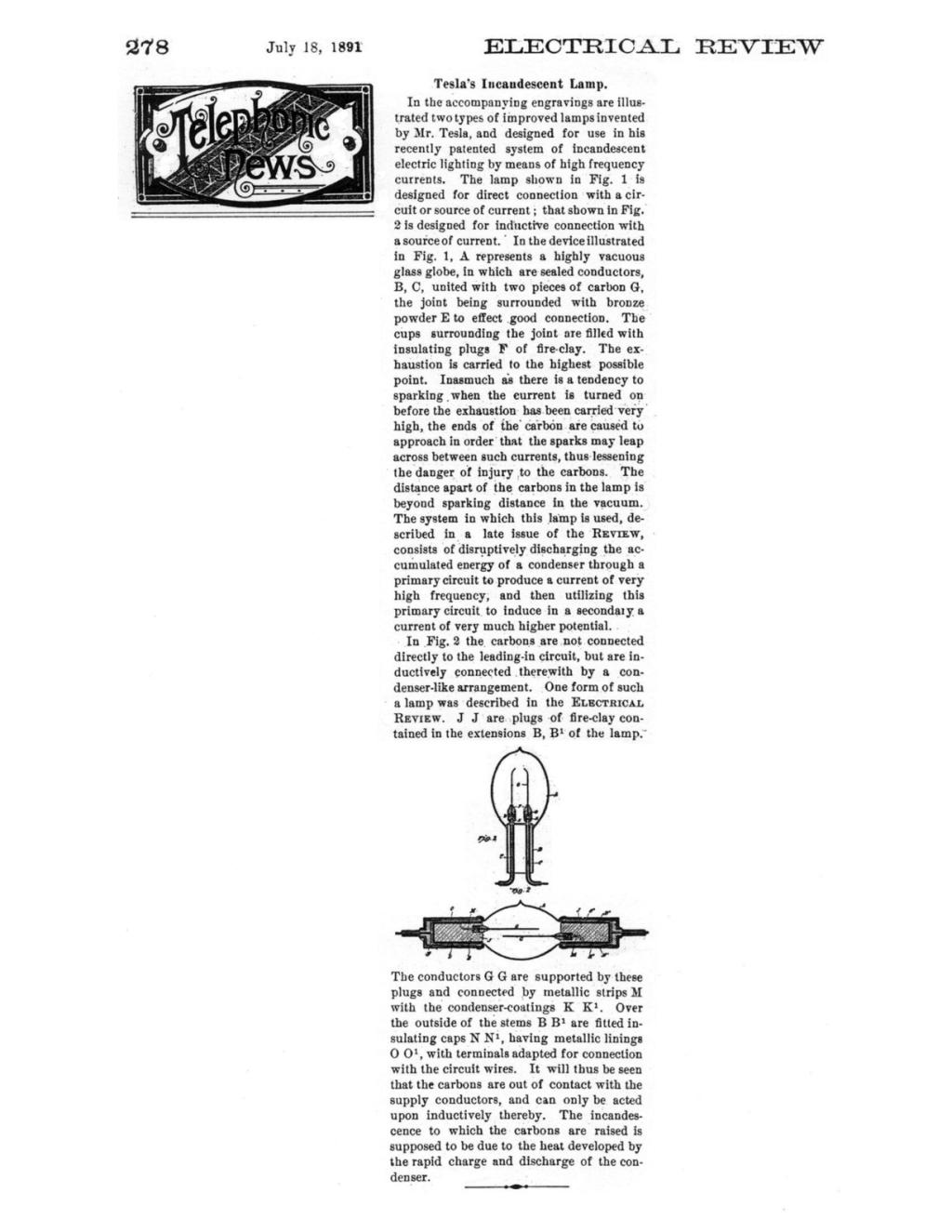