What of the Future in Electricity?

Dr. Nikola Tesla Looks Forward to the Era When One Titanic Electrical Wireless Station Shall Supply Power for the World — Tells of Other Developments That We Have Good Reason to Expect.

“What did the year 1911 contribute to the electrical progress of the world?”

“What does the year 1912 promise in the same direction?”

These questions, asked of Dr. Nikola Tesla, brought forth the following response:

“While there has been no fundamental discovery announced during the year just past, progress has been steady and continuous. Almost insensibly great changes have been brought about in various departments.

“Probably the most important of these is the extension of electric transmission lines from hydro-electric central plants. Although the specter of government restriction has had a deterrent effect on the development of this important industry, it has not inflicted a permanent injury.

“The technical records show that several million horsepower have partly been and will soon entirely be harnessed to the service of man.

“Next in importance is the electrification of the railroads, the advantages of which are now thoroughly appreciated, even by the most conservative of railroad men. That which has been achieved in this field has conferred countless benefits on the community.

“Electric lighting has been greatly advanced through the introduction of the new type of incandescent lamp, which has been considerably improved in the last year and offers greater possibilities.

“The storage battery is still waiting for some discoverer who will open up a new path; but while this is true, improvements have been made in the mechanical construction and arrangement of the elements, rendering the cells more suitable for practical service.

“Equally gratifying strides in telegraphy and telephony have been made, both in the extension of distance and improvement of transmission. Greater progress would have been made long-ago had it not been for erroneous theories that have taken hold of the minds of electricians.

“Wireless communication has developed and has been considerably extended also, but here, too, progress is still hampered by the hypnotizing effect of the Hertzian wave theory. Some of the most able experts are still laboring under the illusion that messages are transmitted by these waves. As a matter of fact, it is the currents through the ground that affect the receiver. The Hertzian waves are extinguished within a small radius from the transmitter.

“Still another branch of applied electricity, electro-therapy — more particularly through the instrumentality of currents of high frequency — has been much enhanced, the most valuable results being the eradication of cancer and like malignant growths.”

In discussing the possibilities of 1912, Mr. Tesla said:

“I suppose that just at this time aviation commands the attention of the world more than any other field. For ages it has been the passionate desire of man to invade the domain of the bird, and finally it has materialized! The advent of a new motor, simpler, lighter, more powerful and efficient, and absolutely reliable in its operation, will convert the flying machine from a boy or a show apparatus to a practical and useful vehicle.

A promising departure has already been made by Dr. Tesla in this line, a description of his new motor having been given in scientific journals recently.

“Almost as fascinating,” Dr. Tesla continued, “are the possibilities of the discoveries that have been made by Mme. Curie. Though it may be safely predicted that the dreams of the enthusiasts will not be realized, enough has been achieved already to justify great expectations for this coming year.”

“What do you think of wireless art in its various applications?” he was asked.

“The sensational exploitation of wireless telegraphy and telephony has naturally created in the public mind the idea that this is the chief if not the only field of its use. As a matter of fact, the world has not even at this moment the faintest conception of the really great and valuable results in other fields that are sure to be obtained in the near future.

“Far more important than communication is the transmission of power wirelessly, which will be done for innumerable purposes. To mention one comparatively insignificant application, a plant might be provided that would enable every vessel or vehicle either on land or the water or in the air to safely travel without compass or any other means of direction such as has heretofore been known. One such wireless plant would be sufficient for the needs of the whole world and the means of saving property and human lives.

“Remember,” Dr. Tesla emphasized, “that I am now only mentioning one of the minor applications of wireless power. Just think what benefits could be derived in this particular phase of aerial development by the construction of one single plant from which all the flying machines of the world could be operated without fuel or other energy of any kind.”

Turning to other subjects he said:

“Entirely new fields have already been opened up to scientific research and inventive application, but still greater possibilities lie before us.

“Think only what it would mean to disintegrate matter into its primary constituents, thus giving rise to new effects and phenomena and liberating forces heretofore unknown! One of the consequences, perhaps not the most important, would be the inexhaustible supply of radium emanations.

“Another realm of infinite promise is that of intense cold, so ably and successfully explored by Sir James Dewar. The production of liquid oxygen and hydrogen, if economically effected, will be revolutionizing in its influence on industry and manufacture.

“Even some of the older electrical arts are still undeveloped. Take the storage battery, for instance. No radical departure has been made since the original demonstrations of Ritter and Plante. The time is ripe for a signal improvement. One can confidently announce the coming, and very soon, of a new principle which will mark an epoch in the development of this branch of electricity.

“Electrical progress,” continued Dr Tesla, in reply to a question, “may be said to have begun with Gilbert and Leyden, respectively the discoverers of the earth’s magnetism and the electrical condenser. From that period on the advancement, although very slow at first, was nevertheless continuous. It was greatly accelerated by the discovery of Galvam and the researches of Faraday, but the rapid growth comparable to that of the present day can be traced back only a quarter of a century.

“Nevertheless there are many facts indicating that at some earlier period electrical science was far more advanced than would appear from historical records. There is a large interval of unproductivity, but only in so far as it concerns actual accomplishment. The intellectual progress must-have been more or leas continuous.

“As to the utilization of fuel energy, I am glad to say that I have recently made a decided step forward through the perfection of my new gas turbine, or rotary engine, which will permit a much more economical use of fuel than heretofore possible.

“The energy supplied to the earth through the sun’s rays is so great that if it could be cheaply stored and converted it would meet all our wants. But, although engines have already been operated by power so derived, all undertakings to this end have proved practical failures, chiefly because of the periodic character of the supply. I have long recognized that the true solution lies in a different direction.

“Telephoning through long submarine cables is possible and would hare been accomplished long ago had the efforts of electricians been turned in the proper direction. The trouble lies in the transmitting and receiving instruments, especially the latter, which are still crude and require strong currents for operation, entailing great loss in the wire, as well as the surrounding insulating medium, and causing weakening and distortion of the impulses. Following the suggestion of the great mathematician Heaviside, the telephone lines are now being made of heavy wire and provided with induction coils, which have the effect of raising the tension and reducing the frictional waste in the wire.

“A further extension in the transmission has been effected by the use of the so-called phantom circuit, consisting of two separated lines. This is an ingenious and practical expedient, but the use of induction coils is only necessitated by the crudity of the instruments. In employing very sensitive receiving devices, speech can be transmitted distinctly through the longest aerial lines and submarine cables without any change in their construction.”

“How about the possibility of making that visible which is going on at the end of a wire?”

“We must distinguish between transmission of pictures and what has been termed television, or seeing at distance. The former is a comparatively old art now well established. Some of the early work in this direction was done in this country by Mr. Amstutz, an American engineer. Quite recently Professor Korn, of Munich, has perfected apparatus which is now being used with success.

“As regards the transmission of images, it is incomparably more difficult chiefly because of the complexity it involves. By the means which have been so far proposed thousands of wires would be necessary between two stations. An invention of mine permits the reduction of this number to but a few, or even to a single wire, so that there is a fair prospect of practical achievement at no remote date. What is more, I believe that seeing at a distance will be accomplished without wires.”

“Will it be possible for electrical science to discover some means whereby such accidents as that of the Olympic and the Hawke can be avoided?”

“A perfect means for this purpose has been afforded through the discovery of the stationary waves, but unfortunately there is no plant as yet in operation with these waves, which, as I have shown, pass from one to the other end of the globe without diminution of intensity, producing stationary loops and nodes, the danger of collisions at sea will be greatly reduced.” 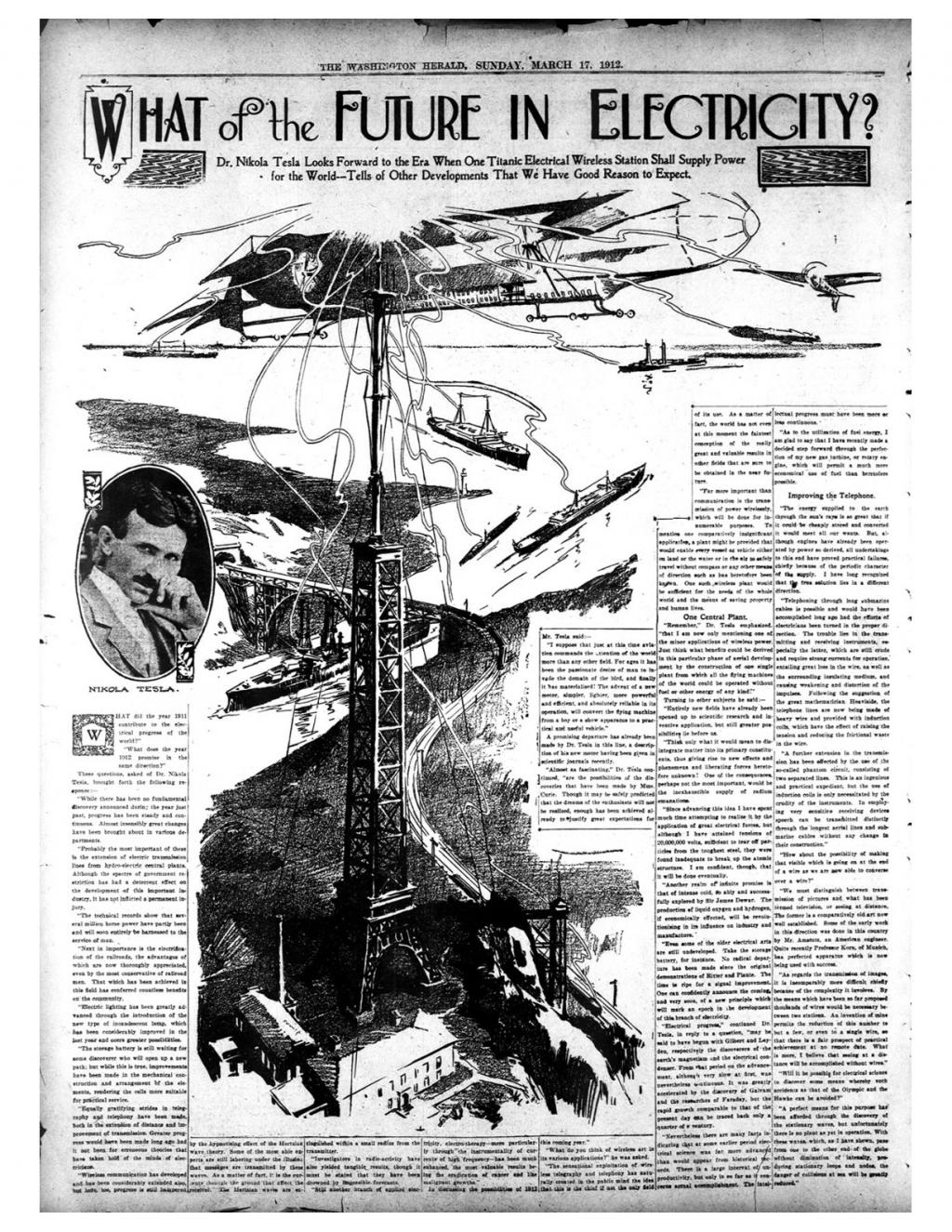