Who was this madman who sent lightning bolts up to the sky and blew the electric company's generator, plunging Colorado Springs into darkness?

He was Nikola Tesla, and the year was 1899. Tesla and other soldiers of the industrial revolution will be honored Sunday, when the National Inventor's Hall of Fame celebrates Inventors Day.

Back at the turn of the century, Tesla was doing his experimentation in a barn-like laboratory topped by a copper ball on the plains east of the city, a laboratory that must have been as frightening as it was fascinating — the kind of place Frankenstein would have liked.

“Colorado is a country famous for its natural displays of electric force,” wrote the dark-haired, mustachioed Yugoslavian in his book “Experiments with Alternate Currents of High Potential and High Frequency.”

“In that dry and rarefied atmosphere the sun's rays beat objects with fierce intensity,” he wrote. “I raised steam to a dangerous pressure in barrels filled with concentrated salt solution, and the tinfoil of some of my elevated terminals shriveled up in a fiery blaze.

“On one occasion 12,000 discharges occurred, all in a radius of certainly less than 50 kilometers from the laboratory. Many of them resembled gigantic trees of fire, with the trunks up or down.” Such a madman became one of the greatest inventors of all time.

He conceived an effective method for utilizing alternating current, which ended the steam age, put the United States on electric power and made construction of the internal combustion engine possible.

Although he died in 1943, his electric genius is very much alive. Memory of him remains strong in the science community and in Colorado Springs — where he did some of his most important work — as well as in his many other residences in this country and abroad. In 1966 Colorado Springs honored him with the dedication of a historical marker in Memorial Park.

“It is quite possible Tesla was the greatest inventor who ever lived,” Eugene C. Goodwin of Westinghouse Electric said at the dedication. “He may have done more to change our lives than any man in history.” But back in 1899, the Colorado Springs Electric Co. wasn't impressed — not after his fireworks display accompanied by a deafening roar had ruined the city generator.

“That's the last free power you'll get from this company!” they told him, Inez Hunt and Wanetta Draper wrote in their book “Lightning in His Hand.” Nevertheless, Colorado Springs was one of his favorite locations. He wrote, “The perfect purity of the air, the unequaled beauty of the sky, the imposing sight of a high mountain range, all contributed to make conditions for scientific observations ideal.”

Tesla was born in 1856 and made his first discoveries and inventions in Gratz, Austria, and the University of Prague. In 1884 he arrived in the United States with four cents in his pocket, and within four years had sold his patents to Westinghouse for a million dollars. In 1899 he came to Colorado Springs and built a laboratory. According to Draper and Hunt, “He was dealing with such a concentration of power that could kill in an instant.”

“At times the very grass seemed to crackle with electricity, and sparks an inch long could be drawn from the water hydrant at a distance of 300 feet from the laboratory.”

Tesla left Colorado Springs in 1900 for New York, with plans to establish a world radio broadcasting station. Construction problems set him back on that venture. In 1934 he announced the discovery of a secret death ray, possibly the later laser beam. He attributed the discovery to experiments he conducted while living here. 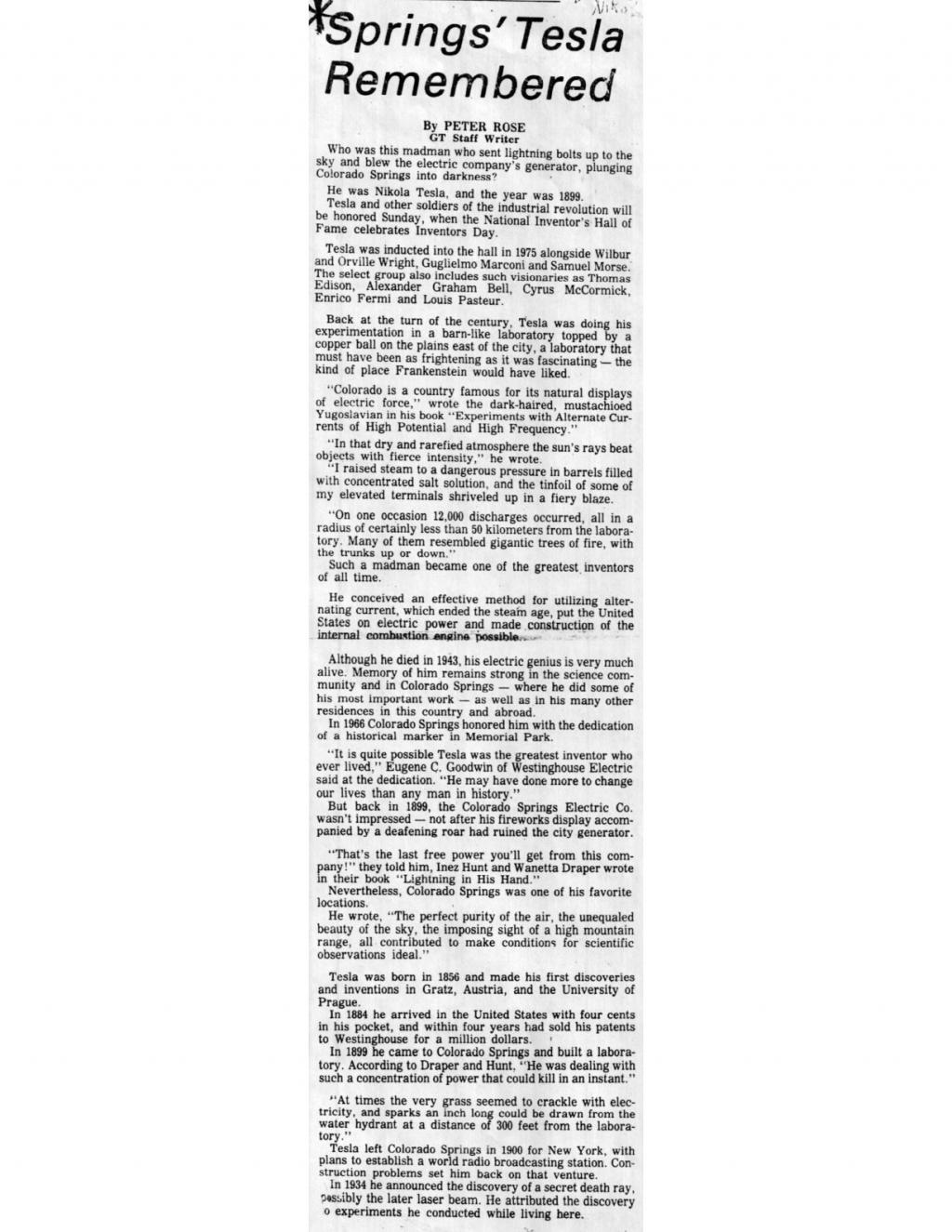