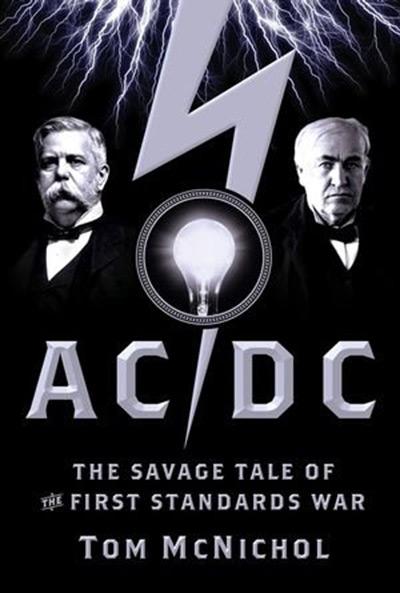 AC/DC: The Savage Tale of the First Standards War

Long before there was VHS versus Betamax, Windows versus Macintosh, or Blu-Ray versus HD-DVD, the first and nastiest standards war was fought between alternating current (AC) and direct current (DC).

AC/DC tells the little-known story of how Thomas Edison bet wrong in the fierce war between supporters of alternating current and direct current. The savagery of this electrical battle can hardly be imagined today. The showdown between AC and DC began as a rather straightforward conflict between technical standards, a battle of competing methods to deliver essentially the same product, electricity. But the skirmish soon metastasized into something bigger and darker. In the AC/DC battle, the worst aspects of human nature somehow got caught up in the wires; a silent, deadly flow of arrogance, vanity, and cruelty. Following the path of least resistance, the war of currents soon settled around that most primal of human emotions: fear. AC/DC serves as an object lesson in bad business strategy and poor decision making. Edison's inability to see his mistake was a key factor in his loss of control over the “operating system” for his future inventions — not to mention the company he founded, which would later become General Electric.

The battle over whether alternating or direct current would be the standard for transmitting electricity around the world changed the lives of billions of people, shaped the modern technological age, and set the stage for all standards wars to follow. Today's Digital Age wizards can take lessons from Edison's fierce battle — control an invention's technical standard and you control the market.

I've always had a healthy respect for electricity. Twice, it almost did me in.

The first time was serious. I was 11 years old, hanging out with my friend Mike in his basement. We had liberated some of his father's tools from a chest and were happily drilling, hammering, and sawing away the afternoon. I picked up a staple gun, which I had never used before, and began firing wildly like a Wild West gunslinger. There was a powerful recoil every time you shot a staple, so it seemed like you were doing something significant when you squeezed the trigger.

Looking around, I noticed that some insulation in the ceiling was sagging a bit — nothing a dozen well-placed staples couldn't fix. I dragged a metal chair under the spot, climbed on top, and with one arm stretched over my head Statue of Liberty style, began shooting staples into the insulation. It was difficult to aim while balancing on the chair, and one of the staples became embedded in a dark brown cord that ran along the edge of the ceiling. I'll just pull that staple out with my hand, I thought.

The brown cord turned out to be a wire buzzing with 120 volts of electricity, the standard household current in the United States. When I touched the metal staple rooted in the wire, my body became part of the electrical circuit. The current raced into my hand, down my arm, across my chest, down my legs, through the metal chair and into the ground — all at nearly the speed of light.

The sensation of having electricity course through your body is hard to put into words. Benjamin Franklin, who was once badly shocked by electricity (though not while flying a kite), described the feeling in a letter to a friend: “I then felt what I know not how to describe,” Franklin wrote. “A universal blow throughout my whole body from head to foot, which seemed within as well as without.”

A blow that seemed “within as well as without”: yes. To me, the shock felt as though it was not simply running along the surface of my skin but was burrowing deep inside my body. The current felt like hot metal had been poured into my veins, a powerful surge that raced into the bones and down the marrow. The electricity was entering my body through my hand, but it didn't feel like the current had any particular location. It was everywhere. It was me.

The electricity flowing through my body was encountering resistance, which in turn was converted to heat. When people talk about criminals being “fried” in the electric chair, it's a fairly accurate description of what actually happens. I was slowly but steadily being cooked alive.

I'm not sure how long my hand clutched the electrified staple. Perhaps only a few seconds; maybe longer. Time seemed to have a different quality while in electricity's grip. The burst of current contracted the muscles in my hand, causing me to grasp the staple even harder, a phenomenon noted by Italian physician Luigi Galvani in the late 18 th century when he touched an exposed nerve of a dead frog with an electrostatically charged scalpel and saw the frog's leg kick.

When a human touches a live wire, electricity often causes the muscles in the hand to contract involuntarily, an unlucky condition known among electrical workers as being “frozen on the circuit.” Victims frozen on the circuit often have to be forcibly removed from the wire since they're unable to exercise control over their own muscles.

I was lucky. Just as my hand was balling into a tight fist around the hot electrified staple, the sharp contraction of the muscles in my arm jerked my hand free. I immediately fell to floor — pale, panting, and dazed, but otherwise uninjured. I had just felt the power of AC, or alternating current, the type of electricity found in every wall outlet in the home. In an AC circuit, the current alternates direction, flowing first one way and then the other, flipping back and forth through the wire dozens of times per second.

The 120 volts of electrical pressure that comes out of an AC wall outlet is more than sufficient to kill a human being under the right circumstances. More than 400 Americans are killed accidentally by electricity every year, and electric shock is the fifth leading cause of occupational death in the U.S. And yet, alternating current is utterly indispensable to modern life. The world as we know it simply couldn't do without AC power. Every light bulb, television, desktop computer, traffic signal, toaster, cash register, refrigerator, and ATM is powered by alternating current. The Information Age is built squarely on a foundation of electricity; without electric power, bits can't move, and information can't flow. Even the bits themselves are tiny electrical charges; a computer processes information by turning small packets of electricity on and off.

My second encounter with electricity's dark side wasn't quite as serious, but still left its mark. I was in college trying to jump-start my car on a frigid day, and had just attached the jumper cables to the battery of another car. As I moved to clamp the other end of the cables onto the dead battery, I stumbled and inadvertently brought the two metal clamps together. Once again, I had completed an electrical circuit, and once more, I was caught in the middle of it. A brilliant yellow-blue spark leaped from the cables, accompanied by a loud “pop.” I immediately dropped the cables and discovered a black burn mark on my hand the size of a quarter, a battle scar from the electrical wars.

This time, I had been done in by DC or direct current, the kind of current produced by batteries. Direct current moves in only one direction, from the positive to the negative terminal, but besides that, DC is the same “stuff” as AC: a flow of charged particles. A car battery produces about 12 volts of electrical pressure, only one-tenth of the power that comes out of an AC wall outlet, but that didn't make my hand feel any better. Under the right conditions, direct current is every bit as deadly as alternating current.

And yet DC is also utterly essential to contemporary life. Every automobile on the road depends on DC to operate, along with every cell phone, laptop computer, camera, and portable music device. The same DC that strikes people dead in lightning storms also saves lives. Cardiac defibrillators deliver a controlled burst of direct current to heart attack victims, forcing the heart muscles to contract and resume a regular rhythm.

Life and death, negative and positive. Electricity has many dualities, so it's only fitting that the struggle to electrify the world would give birth to twins: AC and DC. Long before there was VHS versus Betamax, Windows versus Macintosh, or Blu-ray versus HD DVD formats, the first and nastiest standards war of them all was fought between AC and DC. The late-nineteenth-century battle over whether alternating or direct current would be the standard for transmitting electricity around the world changed the lives of billions of people, shaped the modern technological age, and set the stage for all standards wars to follow. The wizards of the Digital Age have taken the lesson of the original AC/DC war to heart: control an invention's technical standard and you control the market.

The AC/DC showdown — which came to be known as “the war of the currents” — began as a rather straightforward conflict between technical standards, a battle of competing methods to deliver essentially the same product, electricity. But the skirmish soon metastasized into something bigger and darker.

In the AC-DC battle, the worst aspects of human nature somehow got caught up in the wires, a silent, deadly flow of arrogance, vanity, and cruelty. Following the path of least resistance, the war of the currents soon settled around that most primal of human emotions: fear. As a result, the AC/DC war serves as a cautionary tale for the Information Age, which produces ever more arcane disputes over technical standards. In a standards war, the appeal is always to fear, whether it's the fear of being killed, as it was in the AC/DC battle, or the palpable dread of the computer age, the fear of being left behind.

Tom McNichol is a Wired magazine contributing editor and a highly regarded writer on technology and business. He is a regular contributor to the New York Times and Washington Post and has recorded segments for the public radio shows Marketplace and All Things Considered.