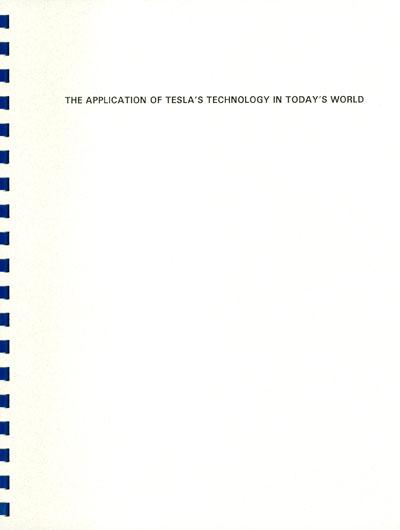 The Application of Tesla's Technology in Today's World

by Lafferty, Harwood and Partners

There can be no parameters to investment research because human society constantly generates change. The pursuit of investment research is to try and identify change before its broad impact is generally understood. This is an unusual report because the subject matter is so foreign to most investors, bankers and analysts but yet the implications will be so great on the work they try to do and the responsibilities they have that it is necessary that they now acquire a background knowledge as to how the normal human brain can be externally controlled by electro-magnetic waves.

First it is necessary to have some background to Nikola Tesla. Secondly, understand what the Soviet union is doing in the field of producing high-powered, low-frequency, long standing electromagnetic waves; the impact that these appear to be having on meteorological conditions and then finally the applications of this technology by the military.

Tesla built a mammoth magnifying transmitter rated at 75 million watts peak power. In an article in the February 1935 issue of Liberty Magazine, Tesla hinted that this could be adapted to military purposes in the form of a defensive weapon. In the article, he said, “My invention requires a large plant, but once it is established it will be possible to destroy anything, men or machines, approaching within a radius of 200 miles. It will, so to speak, provide a wall of power offering an insuperable obstacle against any effective aggression.”

At the Geneva Conference of the Committee on Disarmament last summer, the USSR presented a massive document which turned out to be a draft agreement to prohibit development and manufacture of new weapons of mass destruction. The essence of the proposed agreement can be grasped from the first and last pages we produce here. The itemized subparagraphs of the Annex are important because they describe the kinds of things that the Russians know are feasible and can be used if they are not banned. They would not normally be so specific, - indeed they would not themselves normally initiate such a document or raise the subjects in negotiations. That they have done so points to them having investigated each item in detail, during which they would, of course, have attempted to devise advantageous use of them for their own ends. This would include experimentation and development sufficient to convince the hierarchy of the Politburo as to what the practical consequences would be if they manufactured, deployed and put into operational use.

This report is by no means complete and it is only intended to create an awareness.