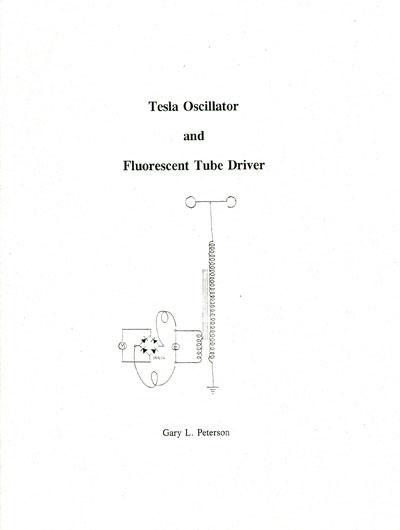 This booklet shows how a low power oscillator can be constructed that will power a fluorescent tube up to 40 watts in size or provide high frequency alternating current over a wide range of voltages up to perhaps 2kV or higher, from a 9-24 volt source. The circuit is a blocking oscillator that uses a single TIP31 NPN power transistor and a few resistors and capacitors. These parts are mounted on an etched printed circuit board and connected to a suitable hand made transformer. The transformer is either mounted on the PC board, along with the other components, or off of the board as is the case with the Tesla oscillator configuration.

Early references to the blocking oscillator can be found in old US Army technical manuals where it is described as being used for pulse generation in primitive WWII radar sets. Mention is also made of the blocking oscillator's use in oscilloscopes for sweep voltage generation. A shortcoming of this type of circuit, apparently common to both tube type and solid state circuits, is its frequency instability, however this presents no significant problem in these particular applications.

The circuit design was found while looking for durable a fluorescent light fixture for use in connection with a 12 volt DC power system. A period of experimentation with a number of “J.C. Whitney Type” fixtures came to a close with the location of Chinese made inverter ballast kit (See Figures 1 and 2). Upon deciding to clone the circuit, the first step was to locate a suitable NPN power transistor. Next, one of the original ballast coils that had failed in operation was disassembled and the three wires used in its construction were measured for length. Armed with this information it became possible to recreate the entire Inverter/Ballast circuit. Further experiments combined with a little common sense led to additional modifications and resulted in the present configuration.