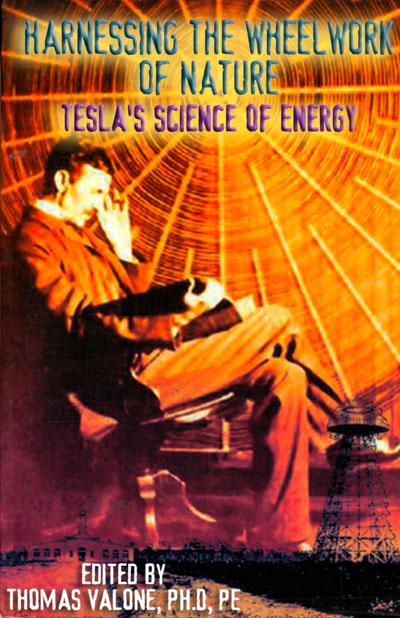 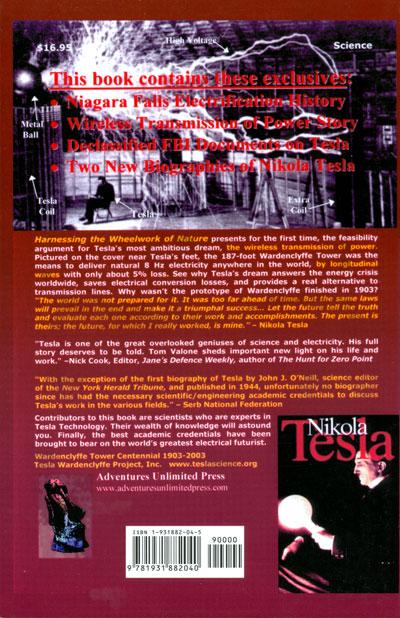 Harnessing the Wheelwork of Nature: Tesla's Science of Energy

Harnessing the Wheelwork of Nature presents for the first time, the feasibility argument for Tesla's most ambitious dream, the wireless transmission of power. Pictured on the cover near Tesla's feet, the 187-foot Wardenclyffe Tower was the means to deliver natural 8 Hz electricty anywhere in the world, by longitudinal waves with only about 5% loss. See why Tesla's dream answers the energy crisis worldwide, saves electrical conversion losses, and provides a real alternative to transmission lines. Why wasn't the prototype of Wardenclyffe finished in 1903?

“The world was not prepared for it. It was too far ahead of time. But the same laws will prevail in the end and make it a triumphal success... Let the future tell the truth and evaluate each one according to their own work and accomplishments. The present is theirs; the future, for which I really worked, is mine.” - Nikola Tesla

“Tesla is one of the great overlooked geniuses of science and electricity. His full story deserves to be told. Tom Valone sheds important new light on his life and work.” - Nick Cook, Editor, Jane's Defense Weekly, author of The Hunt for Zero Point

“With the exception of the first biography of Tesla by John J. O'Neill, science editor of the New York Herald Tribune, and published in 1944, unfortunately no biographer since has had the necessary scientific/engineering academic credentials to discuss Tesla's work in the various fields.” - Serb National Federation

Contributors to this book are scientists who are experts in Tesla Technology. Their wealth of knowledge will astound you. Finally, the best academic credentials have brought to bear on the world's greatest electrical futurist.