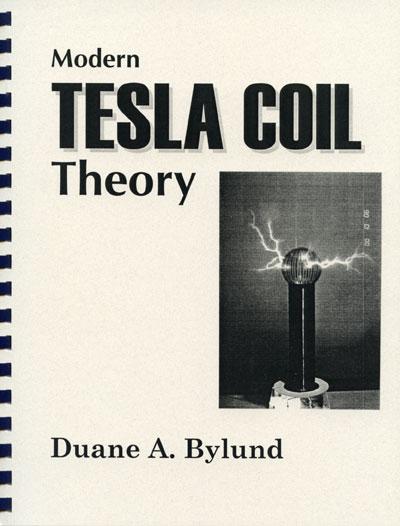 by Duane A. Bylund

This had its beginnings when I made my solid state Tesla coil with AFC in early 1989. I started to write an article on it but there was so much information collected that the article just grew into this book. My main interest has been in how Tesla coils work, not in making the biggest coil possible. For this reason I have had very little experience with high powered Tesla coils. The Tesla coils used for examples in this book could be classified as tabletop units. I do not claim to be an expert on Tesla coils but I want to share what I have learned about them with other people. I hope this information will be of some use in understanding how Tesla coils work.

Chapter two gives a basic understanding of transmission lines and antennas. This information is also common material but it was written here with an application to Tesla coils as the final objective.

Chapter three is titled “Tesla Secondary Coils.” Tesla's original Tesla coil used a capacitive discharge circuit to develop high voltages in a secondary coil (the secondary coil is actually a resonant RLC circuit). Since that original Tesla coil other methods have been used to get power into the secondary coil, such as vacuum tube oscillators. These are known as vacuum tube Tesla coils. In Modern Tesla Coil Design Theory, some of the circuitry employs several different secondary coils (such as the secondary of ferrite transformers etc.). For this reason, the coil that is operating in a resonant mode, for the purpose of developing high voltages, is called the Tesla secondary coil. Chapter three is about this coil. Most of the information in this chapter comes from my own experiments.

You will find lots of theory in this document that may not be generally known, including: