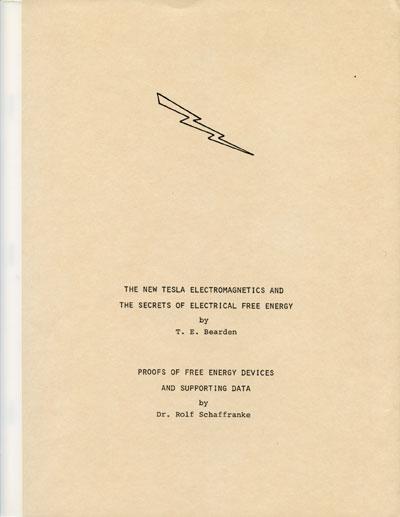 The first major breakthrough in free energy is announced and will result in commercial production of units for home and transportation use. The new technology is emerging almost simultaneously at a number of locations around the world. Truly, a new era is being created.

The initial portion of this booklet includes additional comments by Tom Bearden on the new Tesla electromagnetics, referring to discrepancies in the present EM theory. This paper presents a summary of those flaws, and represents a continuation of a previous paper, “Solutions to Tesla's Secrets and the Soviet Tesla Weapons.” The reference material is discussed, but the full value and impact will be for those who will make the effort to obtain and study the selected material.

The second portion of this publication, regarding the secrets of electrical free energy, is Bearden's excellent analysis of the nature of the potential sea of energy which surrounds us, and describes the general conditions required to transform it into electrical energy.

Dr. Rolf Schaffranke has especially prepared a brief update of free energy devices and development trends. The sensational announcement is made of a West German motorcycle which operates at several hundred percent efficiency. This vehicle is scheduled for commercial production along with a power unit for home use.

A recent paper by Dr. Schaffranke is included on ether technology, and corresponding development work abroad. The principles presented are parallel to those discussed by Bearden, and also those suggested by Nikola Tesla, whose theory and practice of energy transmission was clearly based on an ether concept.