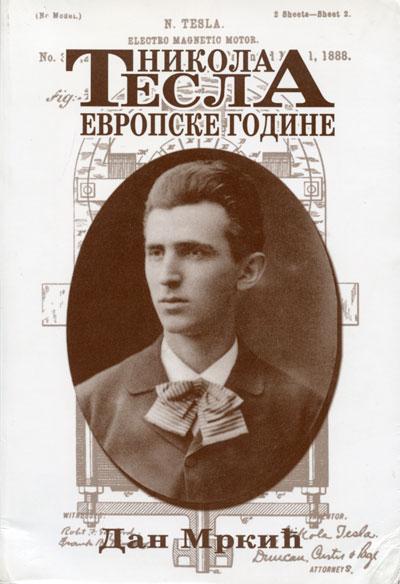 I have been dealing with the personality, accomplishments and ideals of Nikola Tesla for almost my entire life. The form of that attention has changed over the past sixty plus years from the family aspect of a simple and respectful recognition of a man from another age who just happened to be my father's uncle to being closely associated with the popular revival of interest in a giant often regarded as the greatest inventive mind of the modern technological era.

Many books, articles and films have sought to capture something of the essence of this dramatic but enigmatic man. Even the most diligent works focus on the American years of invention and conflict with but a cursory sketch of Tesla's early years, often with the compounding of errors of fact and detail. The research done by Dan Mrkich for Nikola Tesla: The European Years traces the many facets of his early life that influenced the development of the later man.

In addition to a dedication to Tesla and his creativity, Mr. Mrkich brings a Western perspective and some specific resources to bear that were not available to other biographers: his place of birth and early education closely paralleled that of Tesla. (Mr. Mrkich graduated from the same High School as Tesla and for a year lived in the same house as did Tesla more than 90 years earlier.) These parallels, combined with language skills and an ability to travel with relative ease and safety to locations still recovering from a particularly vicious form of conflict, enhance his research beyond anything previously published.

One would think that a comprehensive and chronological review of places familiar to Tesla, residences, schools, work locations and family sites, would have been compiled in the past particularly by those Serbs and Slavs who so adored him. It appears that this was never done in an organized way. Most of the information exists, but piecemeal. Not only did Mr. Mrkich collect the existing site information, visit the locations and report on their current state, his research uncovered several new sites, notably in Paris, Strasbourg and Maribor, Slovenia. By building his biography around the times and places familiar to Tesla, the picture and personality of Tesla gather much greater weight.

It would seem reasonable to expect that places where Tesla, a man of such worldwide renown, lived, was educated or worked would have been commemorated by plaques or similar recognition. Tesla's name is much more familiar to Europeans than to Americans (his name appears on widely distributed household light bulbs and many electrical installations bear his name) but, outside of the former Yugoslavia, this recognition does not regularly extend to plaques. Perhaps the impetus of Mr. Mrkich's research and personal contact will spur those institutions and governments to belatedly honor a neglected son.

Surprisingly, many American locations linked to Tesla are recognized with plaques, street names and so forth. The most impressive is a twice life size seated Tesla holding plans across his lap located overlooking Niagara Falls, the Bicentennial gift to the United States from the government of Yugoslavia. Busts of Tesla are placed in honored locations in at least a dozen of America's leading universities, most the result of a citizen's campaign led by an educator, John W. Wagner.

Nikola Tesla was a superstar of a hundred years ago and the popular darling of the print media much in the manner of today's movie stars and sports heroes. It takes 4,500 pages to reproduce unduplicated copies of articles about him in newspapers, magazines and technical journals appearing between 1885 and 1920. The stardom thrust on Tesla started with the introduction of his alternating current system in the early 1890's and captured the imagination of the entire world with the harnessing of Niagara Falls in 1896. The connection between efficient and transportable electric energy quickly replacing previous inefficient methods with an accompanying decrease in exhausting manual labor was not lost on the general public. They credited the improvement in productivity and living standards to Tesla. Soon the public clamored to hear the details of each new discovery of this scientific icon.

That fame continued in a somewhat more modest measure through the 1930's while he lived. But after his death in 1943, this recognition quietly faded as the nation and the world concluded the World War and directed its attention to reconstruction and an explosion of new technology. It took another 25 years for people to reflect on just who was responsible for the new standard of ease and comfort enjoyed by modern societies. The name of Nikola Tesla, now almost completely unknown to the new generations, kept appearing when talk turned to the creative source of the technology that brought electric power, radio and a host of other everyday devices to the masses.

On a personal basis, I am indebted to Dan Mrkich for his absorbing Nikola Tesla: The European Years. The recounting of Tesla's early years in Europe puts fresh substance to the stories my father told me in my youth. The extraordinary research of this book brings names, places and dates into crisp focus overcoming the hazy recollection of long ago father/son conversations. The parallels of family home, education, career and immigration to America between Tesla and my father have given me an additional dimension of the very tall granduncle I only met as a child.