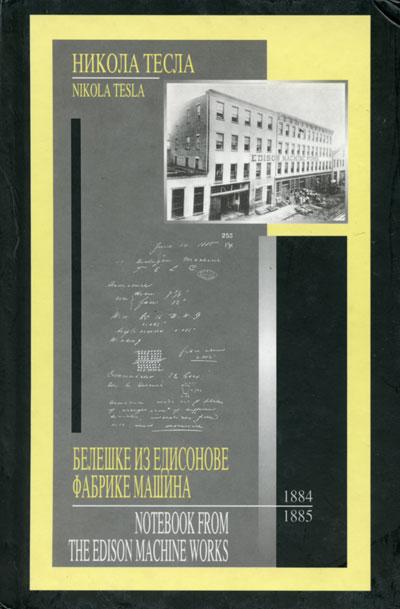 At the beginning of 1884, after successfully performed tasks in Strasbourg, Tesla returned to the headquarters of the Edison Continental Company in Paris. He hoped in vain that the professionals will take interest in his inventions of the rotating magnetic field and asynchronous motor. Disappointed because of the lack of understanding, he became aware that no response for such a revolutionary invention could be expected in Europe. Supported and recommended by Bachelor - one of the directors of Edison Continental Company and collaborator of this inventor - at that time world-wide famous for numerous patents and powerful industry of direct-current devices - Tesla travelled to the United States, full of expectations of understanding and support in the 'New World'.

In June 1884, after the well-known mishaps (theft of the train ticket and personal assets) Tesla arrived in New York with only four cents in his pocket.

Thanks to the exceptional recommendation by Bachelor and successfully performed test given by Edison (repair of dynamo machines at the Oregon ship) Tesla was employed with Edison Machine Works. To this twenty-eight-year old enthusiastic expert Edison gave a very delicate job of redesigning and improvement of dynamo-machines produced in his factories for the ever-increasing market of these devices. The direct current electrification era had begun in the first place with great towns such as New York.

Tesla had expected that Edison, being such a great inventor, would perfectly understand and accept the concept of development of alternate currents devices and systems as a more convenient solution for production, transmission, distribution and use of electric energy. However, he was not understood again, and for that reason he left Edison's company disappointed after less than one year.

In March 1885 Tesla applied his first patent on the improvement of arc lamp regulator. At the same time he registered his 'Tesla Arc Light Co'.

Information on the life and work of Nikola Tesla in the first years of his stay in the USA, (1884, 1885 etc.) can be found in the first place in his biography written by John J. O'Neill. From another biography (written by Grant Konstantinovich Cverava) we can find out that, aside from redesigning and improvement of the existing machines, Tesla also constructed 24 new direct-current generators to be produced in series in the Edison factories. Some details from that period can be found in the very interesting autobiography of Tesla, titled My Inventions. However, as the first-hand document on his activity in Edison's company, Tesla left his diary - a notebook referring to the period from June 8th 1884 to June 16th 1885. On the page 125, relating to the period from December 7th 1884 to January 4th 1885, Tesla wrote with large-size letters “Good By to the Edison Machine Works”, thus marking the end of the close co-operation of these two great inventors in the field of electrical engineering. But on the next page Tesla already noted down the activities in his own company.

To summarize, this is Tesla's diary from the period of his employment in Edison's company. He was engaged on engineering and constructing tasks, in the first place to design direct-current motors and generators (dynamo-machines) used to feed arc lamps and other devices. He calculated the sizes and coils of stators and rotors, as well as the power of machines. He also tested each redesigned or new machine. His projects comprise several types of dynamo-machines (Gramme, Schuckert) predominating at that time. The basic parameters of his own 'Tesla E.L.C. Machine' are also given. Aside of the calculations of new machines, he also reconstructed the existing ones. Noteworthy is also his ability to combine the existing solutions in order to obtain the characteristics (power, current etc.) required for particular purposes.

What else could be mentioned about the contents of this notebook? - In the first place, it is the extreme precision of the calculations, the purpose of which cannot be comprehended. For example, the diameter and weight of the wire used are given with excessive, sometimes above ten decimal places. For the calculations made by Tesla at that time such a precision absolutely had no physical sense. Does it afford an insight into the personality of the genius? Tesla's dutiful and extremely responsible approach to the solution of technical problems had soon enabled him to perform such experiments which could not have been repeated by other physicists.

Although the contents of the notebook from the Edison Machine Works cannot definitely be reckoned as Tesla's significant results, it is a valuable document for the study of the commencement of his professional and scientific activities. It is the initial phase of a profound and revolutionary scientific ascent and, consequently, it may be of great value for researchers.

In any case, the efforts of the Nikola Tesla Museum to put this notebook at disposal of contemporary researchers of Tesla's work and/or of history of science, especially of electrical engineering, should be appreciated. The excellent translation into Serbian together with modem terminology enables all the interested individuals to comprehend and use this notebook.