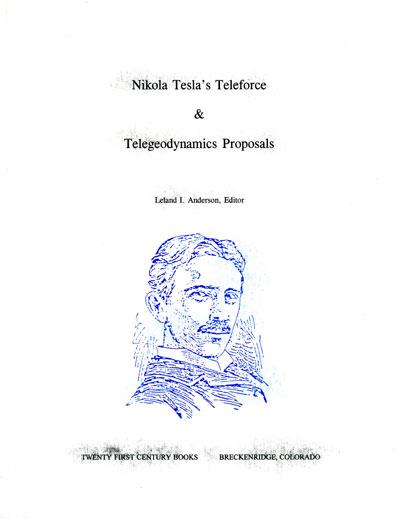 This book contains the original texts of two unique proposals that Nikola Tesla offered up during his later years. In both cases, the technologies described trace their roots back to an earlier and tremendously productive decade in Tesla's life beginning in the early 1890s. At the time of the proposals' unveiling, “teleforce,” the particle beam concept, and “telegeodynamics,” the mechanical earth-resonance concept, received significant press coverage.

The teleforce death-beam weapon was first divulged on Tesla's 78th birthday, July 10, 1934 in the New York Sun. With this machine, he claimed, a nation could deal out wholesale slaughter upon invading armies and shoot down fleets of approaching aircraft 250 miles away. Based on Tesla's own statements it is believed that by 1937 a working model of the device had been constructed.

What appears to have been the inspiration for teleforce was described in a piece which showed up in the July 11, 1934 New York Herald Tribune. Tesla recalled an event that would occasionally take place while experimenting with his single-electrode vacuum tubes in which a minute particle would break off the cathode, pass out of the tube, and physically strike him. “He said he could feel a sharp stinging pain where it entered his body, and again at the place where it passed out.” In comparing these small fragments with the bits of metal projected by his “electric gun” Tesla said, “The particles in the beam of force ... will travel much faster than such particles . .. and they will travel in concentrations.”

Just one year later, on the occasion of his annual birthday celebration interview by the press on July 10, 1935 in his suite at the Hotel New Yorker, Tesla announced a method of transmitting mechanical energy accurately with minimal loss over any terrestrial distance, including a related new means of communication and a method, he claimed, which would facilitate the unerring location of underground mineral deposits. At that time he recalled the earth-trembling ‘quake’ that brought police and ambulances rushing to the scene of his Houston Street laboratory while an experiment was in progress with one of his mechanical oscillators.

Tesla's mechanical power transmission system, he dubbed it the “art of telegeodynamics,” was based upon his Reciprocating Engine invention, U.S. Patent No. 514,169, February 6, 1894. The earthquake story also appeared in John O'Neill's biography of Tesla, Prodigal Genius. The account tells of Tesla causing a minor earth trembler in lower Manhattan, where he had established his laboratory, by clamping a small engine of this type to an I-beam and letting it find its own sympathetic resonance.

In the article “Nikola Tesla, Dreamer” (Allan L. Benson, World Today, Feb. 1912), an artist's illustration appears showing the entire earth cracking in half with the caption, “Tesla claims that in a few weeks he could set the earth's crust into such a state of vibration that it would rise and fall hundreds of feet and practically destroy civilization. A continuation of this process would, he says, eventually split the earth in two.”