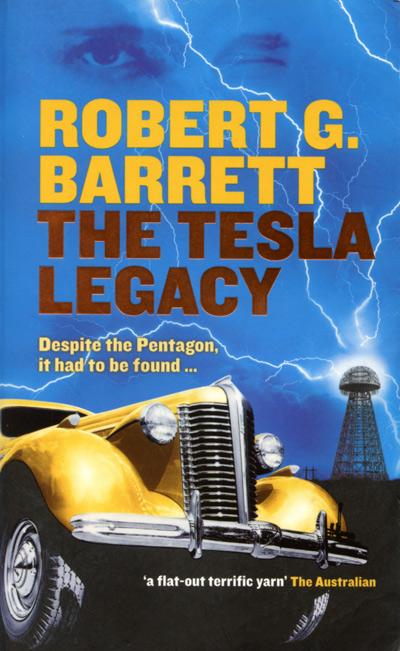 Forget the bloody Da Vinci Code, Mick. We've got to crack the Tesla Legacy. If we don't, we're both dead.

Newcastle electrician Mick Vincent had almost everything in life he wanted. Jesse Ossbourne, the Stockton bookshop owner he loved, a big house at Bar Beach, and a 1936 Buick Roadmaster he cherished... About the only thing missing in Mick's life was a pressure plate for his Buick.

Mick locates and buys a pressure plate from a strange old lady. When he picks up the part he finds a diary that belonged to Nikola Tesla, the late electrical genius reputed to be smarter than Einstein. But what was Nikola Tesla doing in New South Wales outback in 1925?

Some say Tesla was building a doomsday machine powerful enough to blow up Australia and half the world.

The Tesla Legacy is highly classified and the United States Department of National Security are searching for it using spy satellites. Mick and Jesse are caught up in the search and are the targets of a hit squad.

Mick and Jesse are determined to find the Tesla Legacy first—their only clues, a lost mountain of copper ore and an old racehorse called Tears of Fire.

Robert G. Barrett's latest novel, The Tesla Legacy, set in Newcastle, Muswellbrook, Scone and the mysterious Burning Mountain in New South Wales, is an action-packed, pace-driven thriller woven with a delightful touch of romance and an ending guaranteed to send chills down your spine. Proving once again why author Robert G. Barrett is, according to the Australian newspaper, the king of contemporary Australian fiction.