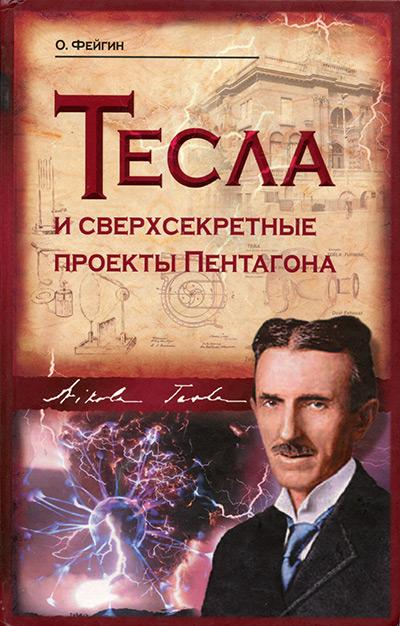 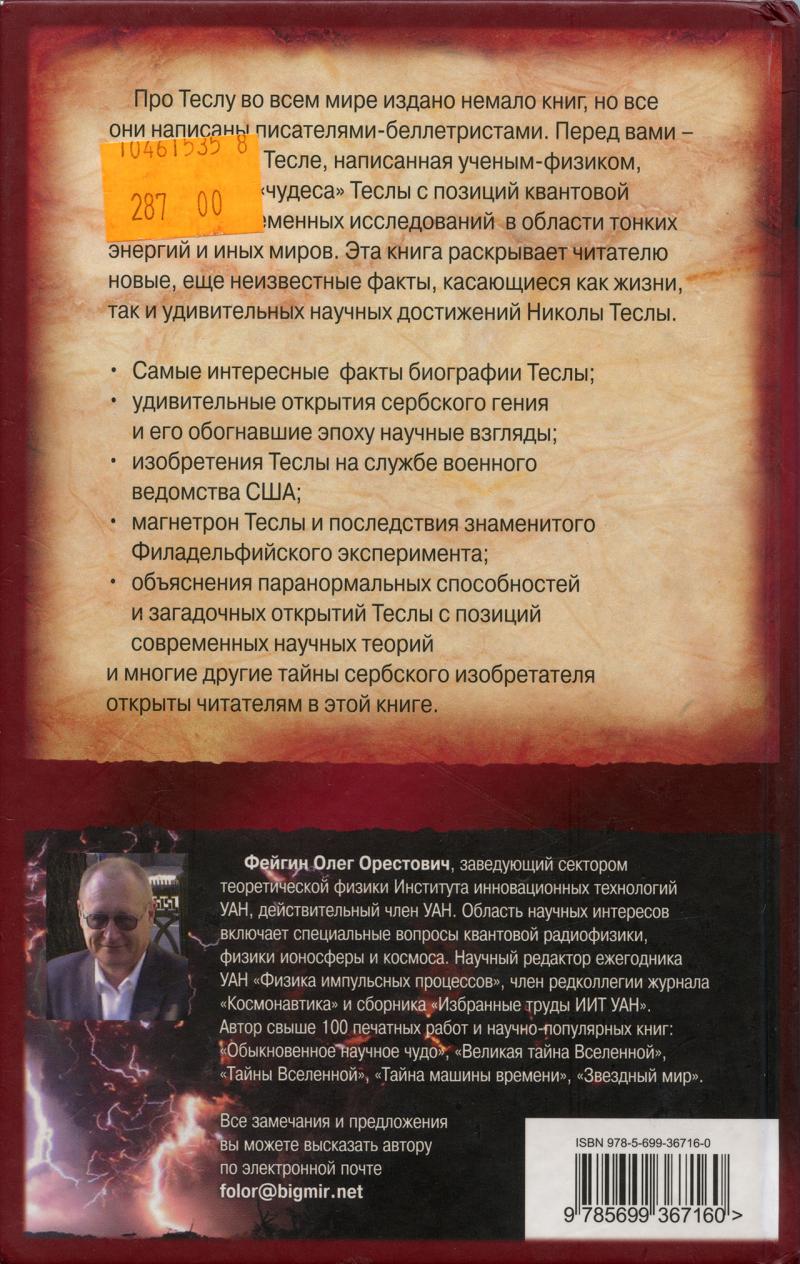 Tesla and the Pentagon's Top-secret Projects

Decisive steps, he went to the far corner of the room where his new silently vibrating contraption. Tesla stopped in front of a large platform, equipped with some strange-looking rocker with massive balls and rockers. Head to one side and swinging from the heels to the toes, the inventor examined the long one of his ingenious “resonant oscillators mechanical vibrations.” Tesla again look inside himself into some unknown depths of space and time, but he shook his head and began to play on his thin lips smile. Inventor remembered a recent test oscillator, which demonstrated its awesome power. Tesla thoughtfully looked through the window at the dark outlines of the surrounding buildings and imagined of them began popping residents took fluctuations foundations of houses for tremors.

He shrugged his shoulders, threw himself a lab coat and whistling, plunged into the depths of the mechanism. Everything around simply ceased to exist for the inventor, and only persistent trilling doorbell (Tesla invention also) made it come up to the surface of consciousness, immersed in the depths of creative ecstasy.

Tesla hurried downstairs to greet friends today the company headed by Mark Twain.
— Nikola, on the way here I came up with a good aphorism that tomorrow will quote millions of my readers: “Thunder — is good, thunder — is impressive, but lightning does the work” — Mark Twain said with aplomb.
— Well, lightning, of course, spectacular, but besides them, there are many electrical wonders — Tesla laughed. — In general, I, as always, happy to read what you write about my new experiments.
And indeed, the next day newspapers ran headlines with “The Wizard of words visiting magician electricity” where Twain wrote with admiration:

“To get a shock at the sight of the lab of Nikola Tesla, one must have an unusually steady mind. Imagine that you are sitting in a large well-lit room, among the mountains of the mechanisms of the picturesque view from all sides. Suited to you a tall, thin young man and simple fingers clacking instantly creates bouncing ball of red flame and quietly holds it in his hands. Surprise you with staring, how he manages not to burn your fingers. He drops this ball on your clothes, hair, on your knees and eventually puts a ball of fire in a wooden box. You amazement notice that the flame never leaves no trace, and you rub your eyes to make sure you do not sleep...

Suddenly the whole laboratory filled with strange beautiful light. You rummage through the eyes of the whole room, but you can not find the source of illumination. Then our host takes out a white mouse cells and puts it on a metal platform, where it is instantly killed by electric shock. Tesla spectacular movement, finding one hand in his pocket, blithely regard deadly platform with the other hand. Volt-ampere indicator slowly creep up. For the body of the inventor is supplied voltage over two million volts, while none of the muscle he did not flinch. Its silhouette is now surrounded by a halo of electricity formed myriad tongues of flame, like arrows, digging out from every part of his body.

Then our host announced that he wanted to make a very important statement. All the experiments that we were shown, he named only toy tricks, not of particular importance to the world of science. But now he created a grand project “Global ether cavity,” which will undoubtedly produce a grand revolution in science and technology. With its fantastic setting Tesla promises us not only to create a “World Wide Web radio wireless telegraphy”, but also to pump electricity anywhere in the world for “The World's energy system.”

When we left the lab inventor was daylight, but we have seen how in the windows “electrical room” continued to burn unearthly dazzling white lights electricity — there Tesla invented new experiences that can amaze the world.

In 1900, 60 kilometers from New York City on Long Island launched Tesla colossal project for the construction of “Global station wireless transmission of energy.” I must say that the project itself famous explorer electricity had quite vague scientific basis. Tesla himself carefully concealed from the public its formulas and calculations.

With an air of profundity he told shareholders of the enterprise, as will produce a resonant buildup “planetary electric atmosphere.” However, he argued that the whole earth will turn into one global resonator circuit where air layers will play a huge role capacitors.

Anyway, as Tesla was able to convince the American moneybags originally headed by greedy, but narrow-minded banker — Morgan moneylender in reality their ideas.

On Long Island Tesla Corporation acquired a large tract of abandoned wasteland. The proximity of the New York Tesla's laboratory on Houston Street, 46, where the inventor spent all staged and basic screening tests, as well as the presence of rail way station made a choice location to be quite successful. Besides purchasing sites around for miles was not dwellings, and particularly insisted on this Tesla, anticipating their experiments insecurity.

Already at the beginning of 1901 to the railway siding in the county Suffolk rushed flow of materials and designs, and later thousands of technical workers and builders started installation object, dubbed “Vardenklif” (Wardenclyffe) on the terrain of its location.

In the central part of the cleared land was decided to establish a research base of the “Global repeater” and beat around town with a real scientific labs and cottages for scientists, engineers, technicians and builders. Tesla suggested that the population of his research center will be at least two thousand people.

For Morgan and his company's stupid but incredibly ambitious Wall Street tycoons Tesla invented a simple and clear slogan: “Vardenklif — radiostolitsa world”, who persistently repeated at shareholders' meetings and in front of crowds of journalists. Tesla always disliked pushy American reporters, but seize the moment and let them poking around building sites, immediately deploying a powerful media propaganda campaign to create more than one company. Tesla explained that the corporation “Vardenklif” is primarily intended to create a certain radio-technical center, which will transmit at various wavelengths any messages, thus forming a “global network of wireless telegraphy.” In addition, the inventor is not very clear and outlines the prospects for many known only in our time radio engineering applications: remote control, and other locations. However, at the initial stage of construction “Vardenklif” Tesla set about trying to build a second station capable of transmitting anywhere in the world flows of electricity. This “global power elektrorezonator” inventor intended to build hydroelectric power plants at Niagara. Unfortunately, the inventor did not manage to infect his faith in these extraordinary grandiose projects of others. All financiers, to whom he addressed, expressed polite surprise the fantastic new prospects, but ... preferred to wait for completion of construction and start of operation “Vardenklif.”

After some time on the former wasteland appeared cyclopean building the world's first wireless Electricity transmitting system. It had the appearance of a wooden tower construction height of 57 meters with a steel shaft depth of 36 meters. Wooden frame towers over twenty meters in diameter weighing 55 tons. The only metal part of the design was a five-ton ten-spherical dome at the top of the tower-resonator. With shestidesyatimetrovoy coils, one of the poles that connect to a large copper area overlooking the laboratory room, Tesla created electrical potentials that generate lightning discharges tens of meters in length. Five years after the start of construction took place on a trial run of the “Global electric resonator.” Tesla took great demonstration, and in the late afternoon time, waiting for a powerful storm front coming from the Atlantic, he hooked his “atmospheric resonator.”

The effect was awesome! Many even thought that the storm as it was divided into two parts, bypassing Long Island. The next day, the newspaper headlines: “Doctor Electricity lit the ocean of air”, “Tesla lights the sky,” “Electrical storm dispersed fireworks over Long Island.”