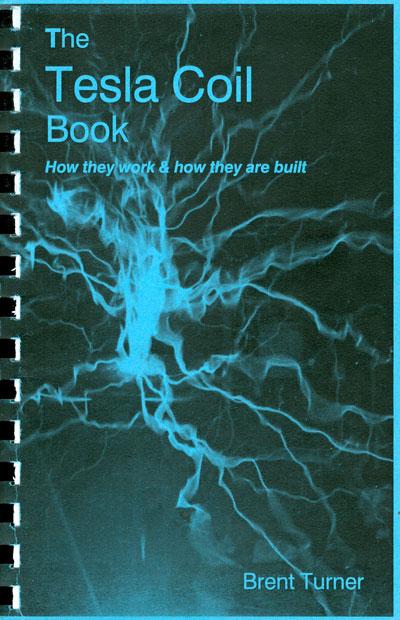 The Tesla Coil Book: How They Work and How They Are Built

Picture, if you will, a million volts of electrical energy dancing from the top of a cylindrical coil of wire. Sizzling and crackling, this awe-inspiring lightning-like display seems to boldly challenge nature, but is created with a device known as a Tesla coil.

A deceptively simple device, the Tesla coil has long been a fascinating piece of electrical apparatus ever since its invention near the turn of the century. It can produce electrical discharges upwards of several million volts, second only to nature's own lightning.

However, unlike nature, the Tesla coil creates a special type of electricity which, in many ways, baffles ordinary common sense and intuition. One is the ability to pass over the human body with no ill effect. Tesla would often dazzle his audience by allowing several million volts to pass harmlessly over his body, only to leap into the surrounding air. Another is the ability of high-frequency currents to follow illogical electrical paths. Tesla himself often demonstrated this by using a lamp in a circuit which was obviously shorted by a large u-shaped metal bar. Electrical current mysteriously ignored the short, and flowed through the lamp instead.

The Tesla coil can 'transmit' energy over vast distances with little or no loss, thus eliminating the cumbersome wires and poles currently in use. Tesla's dream was to one day power the entire earth and went so far as to actually construct a prototype station on Long Island in New York, but was forced to stop due to financial problems.

The Tesla coil also creates radio waves, and was the first 'modern' radio transmitter. The most amazing thing is it's simplicity. Consisting of two coils of wire and a few other simple items, the device transforms ordinary wall current into electrical magic.

Despite this simplicity, the Tesla coil relies on important and complex laws of physics and electricity. Tesla used these along with an amazing ability to visualize complex relationships. In part, it was Tesla's work which gave us the formulas and principles to accurately describe radio and it's related areas.

Physically, Tesla coils are not difficult to construct, and many coils have arisen from garage and basement workshops built from ordinary household and hardware store items. Many electrical and electronic trade magazines have run Tesla coil plans over the years, but the vast majority of information on why the coil works has been obscured by time and neglect.

This book has been written to better explain the Tesla coil, both from a theoretical as well as a practical viewpoint. Through years of experimentation and research, the author has compiled essential information on coil theory and design which may be useful to anyone wishing to pursue and design these devices with performance near those that Tesla built himself, some 100 years ago.

In covering the aspects of Tesla coils, this book has 3 sections; spark-gap or conventional Tesla coils, vacuum tube designs, and (finally) some insights into modem solid state versions. Information is presented in an easy to read format, and in a logical, step by step sequence.