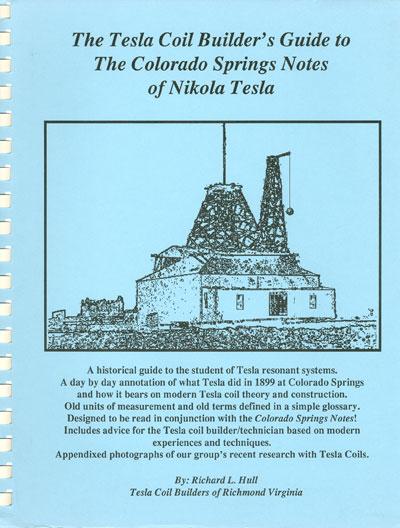 The English edition of Nikola Tesla's Colorado Spring Notes: 1899-1900 was published 16 years ago (Nolit, Belgrade, 439 pp.). Since that time, a number of writers and researchers have made reference only to certain specific technical points in this remarkable volume, but this guide is the first analysis in toto of the detailed experimental work covered. Why is an analysis needed? For two basic reasons:

(1) Tesla accumulated the CSN during the construction and testing of experimental engineering designs for large, high power electrical resonators to be used at his Wardenclyffe (Shoreham), Long Island, plant. The discoveries and experimental work covered in the notes were also the basis for and in support of patent applications solidifying his ideas. The notes were for his own personal use and not intended for publication. Because of this, the notes are not systematically organized by task or topic but, rather, presented chronologically as the work progressed.

(2) The units that Tesla used in measurements and calculations are not those in vogue today, such as inductance and capacitance values variously expressed in centimeters (esu/emu units) or henrys and farads, and vibration rates expressed in cycle time period rather than frequency.

As a result of these difficulties, most readers have been frustrated in following the various experimental objectives through the volume and have shied away from the entire reading of it. The CSN have instead typically been scanned for portions that seem to be of special interest. Such an approach excludes the great value to be obtained from the integrated information bearing on the design of very high-voltage, high-power, high-frequency resonators (i.e., Tesla coils and magnifiers).

The guide is organized in the same fashion as the CSN, by date entry. It is intermixed with Hull's expert advise from his own formidable experience in designing and constructing efficient, high-performance resonators. The practical value of his observations can not be overstated, and many important guidance criteria are presented for those attempting the construction of any manner of Tesla coils and magnifiers.

Part of the charm of this work appears in the form of summary excerpts of the correspondence between Tesla and George Scherff, his secretary and business manager in New York City. Mr. Scherff came to work for Tesla at the age of 29 in 1895 and their association continued for 35 years. These excerpts provide important information concerning, for example, the equipment and experimental apparatus shipped from New York to Tesla in Colorado Springs as well as presenting a backdrop of the social and competitive milieu. Thus, Hull's volume provides a wealth of information from both an historical and technical perspective.

For those not well acquainted with Tesla coil design and operation, Hull begins by pointing out that, fundamentally, grounding the base end of a vertical coil forces a node at that end and the coil resonates at its natural 1/4-wavelength frequency. A “good” ground connection is a must. If, however, the coil is ungrounded, and typically placed in an elevated, horizontal position, the coil then self-resonates at its natural 1/2-wavelegth frequency with a node forced at the center.

From that introduction we are led through increasingly advanced issues such as “isotropic” capacity - essentially that of an isolated, but connected, conducting body as often employed for a Tesla coil terminal. Hull explains that Tesla's “magnifier” is not the classic Tesla Coil. In an article entitled “Tesla Magnifier Basics” (Electric Spacecraft Journal, Issue 10, pub. 1994), Hull notes that “there appears to be no place in the historical record where the magnifying transmitter was even investigated!” Astonishingly, it has taken between 80 and 90 years to get a “handle” on this three coil system.

The first hint that the three-coil magnifier system required a different form of analysis than simply that of lumped-constant coupled resonant coils came to this writer in September 1975 when Robert Golka, in attempting to mimic Tesla's magnifying transmitter, pointed out that the third or “extra” coil, need not be coaxially positioned with the secondary driver - it could be positioned at any reasonable distance away from it! This coaxial configuration had heretofore distracted all those examining the amazing photographs of the magnifying transmitter in action Tesla brought back from Colorado Springs at the turn of the century and turned attention away from the required broad scope of theoretical analysis.

Hull points out that Tesla was working with the extra coil operating at 1/2 and 3/4 wavelengths but, unfortunately, the results of these tests do not appear in the CSN. These experiments, with the system operating at multiple frequencies, were most propitious as later review has shown. They were performed by Tesla to develop his work on “individualization” techniques leading to his patents on the fundamental AND logic gate (723,188 and 725,605), applied for on his return to New York. A forthcoming book, The Invention of the AND Logic Gate and the Operation of High Frequency Resonators, will describe Tesla's heretofore unpublished work on this topic.

Multiple-frquency operation also had the disturbing, not to mention, threatening, consequences for Tesla working in a wooden structure on the arid plains outside Colorado Springs by causing electric fireballs to frequently break out of the secondary driver coil. (See CSN Dec. 17-31 entry in association with Photo XI, and Jan. 3 entry in association with Photos XL-XLII.) Fire extinguishers are to be seen in some photographs. The mechanism of fireball production was described years later by Tesla to John O'Neill, Tesla's first biographer. The chapter description was omitted from the resulting biography but has recently been reproduced (T.C.B.A. NEWS, Vol. 7, #3, 1988). James and Kenneth Corum, Corum Associates, arranged their apparatus according to the chapter description, having two resonators operating together at different frequencies, and - fireballs were produced.

For those who have read the CSN, a curious aspect concerning Tesla's section entries on tests to be performed is that the results are not to be found in the daily record. This tends to support a belief held by many that the CSN were not the sole body of records kept by him at the experimental station. The record groups possibly consisted of (a) general correspondence, (b) patent applications, (c) the CSN, (d) notes of experimental results. It is the latter for which scholars have since been searching but without success. Tesla moved all his records to the Wardenclyffe site during its development, and shortly before the tower's destruction in 1917 the plant was ransacked. Records were strewn ankle-deep across the floor. A California inventor who witnessed the destruction and seeing papers blown down the road exclaimed, “History is being carried away by the wind.” It is important to realize therefore, that the CSN are not the complete picture of Tesla's efforts at Colorado Springs.

Hull is to be commended on his several references to Tesla working with the magnifying transmitter in a continuous-wave (CW) mode. This aspect of Tesla's work has been essentially overlooked by historians of wireless telegraphy who have assumed, based again upon the photographs of the magnifying transmitter in action Tesla brought back from Colorado Springs, that Tesla's interest was solely in the optimization of damped-wave resonant systems.

Hull concludes by mentioning Tesla's claim of receiving what he believed to be extraterrestrial signals at Colorado Springs experimental station. As expressed by this writer years ago in Nature, it is unfortunate that this claim was not greeted by interested inquiry rather than prompt criticism from the scientifIc community. The opportunity to obtain details of Tesla's work was thereby lost. It is quite certain that today, if one were to establish an experimental shack on the eastern plains of Colorado Springs and claim to have received extraterrestrial signals, every astronomical group in the world would be knocking at the door.

This book is a veritable storehouse of essential information about the coils and magnifiers designed and constructed by Tesla at his Colorado Springs experimental station presented in organized sections with Appendixes of supplemental text and extraordinary photographs. It is a must for any Tesla coil builder's bookshelf.