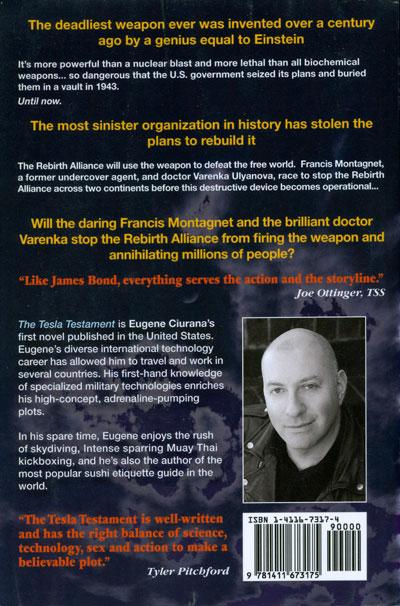 Engineering genius Nikola Tesla invented an energy transmission device at the beginning of the 20th century capable of zapping distant points of the Earth with megaton-sized blasts of electricity. The FBI confiscated the plans upon his death in 1943. Today, the most sinister organization in history has stolen the plans to rebuild it, and may succeed in making it operational since few believe that a fanciful machine based on 100-year-old technology poses danger. Will the bad guys finish the device to use it for political blackmail and to annihilate millions?

What follows is the story of how Francis and Varenka, a former undercover agent and a brilliant engineer, obtain and decipher Tesla's blueprints and then race across two continents to stop the Rebirth Alliance from making this device operational. The story blurs facts and fiction by mixing details about Tesla's life and known inventions with a high concept plot in a contemporary setting. Will Francis and the beautiful doctor Varenka succeed?

The Tesla Testament is the product of seven years of research in the life and works of Nikola Tesla, arguably one of the greatest geniuses in modern history. The novel is as much a tribute to his work as it is a celebration of Tesla's achievements. Significant nuggets of crucial information (did you know it was Tesla and not Marconi who invented radio?) are present in the narrative. History, fact, and fiction shape a fast-paced story in a contemporary setting. Heroic characters, fast action and enough elements of truth will make you wonder “could this possibly be true...?”

Eugene Ciurana is a contemporary fiction writer. Eugene's diverse international technology career has allowed him to travel and work in several countries. His first-hand knowledge of specialized military technologies enriches his high-concept, adrenaline-pumping plots. Eugene has published over 50 feature articles in several magazines in the US, Mexico, and Europe, and he's the author of the most popular sushi etiquette guide in the world.