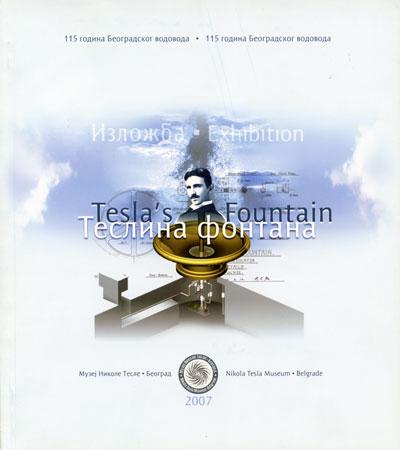 Nikola Tesla presented mankind with a huge number of significant inventions, and the ingenuity of these solutions, universality of their application, and their sheer expansion of numerous scientific and technological boundaries, have changed the world around us. The long list totaling 280 patents - 116 original ones protecting 125 of Tesla's inventions, as well as 164 analogues registered in 26 countries of the world, are the testimony of his great and imaginative mind, with their great achievements of equal success in a wide range of fieldsfrom electro and radio technology, to machine engineering, medicine, aviation, and many other areas of science and technology.

However, one of his inventions, which differs to a large extent from everything else that this great inventor dedicated the largest part of his creativity to - was a fountains. For several years over the second decade of the 20th century, with some interruptions, Tesla worked on and developed several models of his fountains. The rich archive material preserved in the Nikola Tesla Museum in Belgrade demonstrates Tesla's great dedication to this segment of his creative work. Numerous sketches and technical drawings, a long list of calculations related to the dimensions of constructive elements for fountains, fluid flow parameters and the characteristics of the motor drives, as well as precisely defined modifications and improvements in construction, are testimony to the idea that Tesla dedicated all of his inventive passion and energy to this segment of his opus.

The Tesla Fountain, a completely new type for that period, should have introduced a new type of splendor. As Tesla himself wrote, it is the beauty of a “fascinating spectacle of a large mass of fluid in motion and the display of seemingly great power.” His fountain would allow for “realization of beautiful and striking views through illumination and the disposition of voluminous cascades,” all that with relatively low energy consumption.

Regrettably, Tesla's cooperation on fountain construction with Louis Tiffany, the famous New Your artist, owner of the Tiffany Studio, and the creator of the special stained glass technique, ended without the realization of planned projects and expected commercial success. Irrespective of that, this part of his creative opus demonstrates his boundless interest, great creativity, and his ease at solving complex engineering problems in an original manner.

The idea to place a Tesla Fountain on the, at the time, empty and unused plot at the corner of the streets Proleterskih brigada (today Krunska) and Prote Mateje in Belgrade, right next to the Nikola Tesla Museum, is not new. This initiative was first proposed by the Nikola Tesla Museum in 1984. Later, this idea was supported by numerous other admirers of Nikola Tesla, with the proposals that the replicas of this fountain should find their place in front of the buildings of the Faculty of Electro Technology in Belgrade, the Belgrade Waterworks, the Nikola Tesla Institute of Electro Technology, and on other representative locations in Belgrade.

The Belgrade Waterworks and Sewerage, established 115 years ago on July 12, 1892, on the occasion of its anniversary, together with the Assembly of the City of Belgrade and the Nikola Tesla Museum, decided to realize this complex and unusual project. Owing to Tesla's pump, constructed in accordance with his original patent, the water will start flowing through the first ever Tesla Fountain in the world. The final materialization of what the creator intended with his design - to provide a “magnificent spectacle... captivating and stimulating” - is going to continually remind all admirers of Nikola Tesla of that great man, and the grand and universal significance of his deeds for the whole history of mankind.