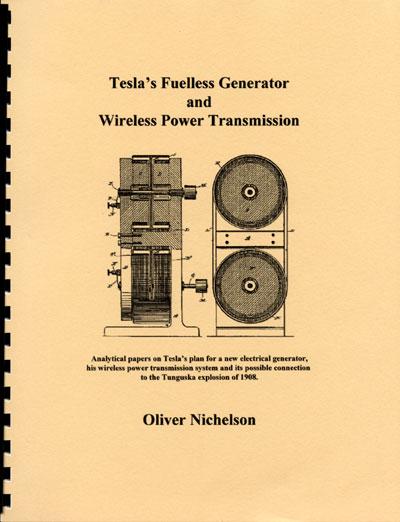 However, Tesla's engineering accomplishments, particularly the alternating current generator, transformer and motor, translated easily from the older science to the newer science. Motors invented in the 1880s ran just as well in the 1920s even though the old science upon which they were based was considered wrong by that time.

The shift in scientific paradigms was, and still is, an obstacle to understanding Tesla's later work. His discoveries were based on a broader understanding of electrical science than that of his day or even than that of today. This is particularly true in relation to his work in the 1890s on a new type of electrical generator that would, he claimed, extract energy directly from the “ambient medium.” It also applies to his wireless power transmission method which rested on the concept of the earth being filled with an incompressible material that allowed the transfer of force to any place on the globe.

The following papers are an effort to translate Tesla's accomplishments in power generation and transmission from the language and concepts of 19th century science into today's scientific language.

Nikola Tesla's “Free Energy” Documents reproduces the inventor's 1902 letter to Robert U. Johnson about Tesla's new energy generator that would not consume fuel. This letter was found in the Tesla Collection at Columbia University Library when attending the IEEE Tesla Symposium in New York in January 1976. This letter will come to be considered as important in the history of electrical science as the papers of Franklin, Faraday and Maxwell.

Nikola Tesla's Later Energy Generation Designs was prepared for the 26th Intersociety Energy Conversion Engineering Conference in August 1991. The paper documents that Nikola Tesla claimed to have built an electrical power generator that would not consume fuel, where in his writings the description of such a device is found, the theory of how a fuelless generator could be possible, and a suggestion as to how Tesla's new device might have operated. The paper moves from historical fact, the claims for such a generator in a letter hand written by Tesla, to speculation about the operating principles of the inventions. At the time of writing the paper, the historical material was certain, but the engineering explanation of how the new type of generator work was not convincing.

The Second Law of Thermodynamics and Tesla's Fuelless Generator was prepared, for the 28th (1993) IECEC conference. It takes up Tesla's argument for a fuelless electric power generator that does not violate the Second Law of Thermodynamics. Though the device appears to supply power without fuel, it is not a perpetual motion machine. Tesla's explanation and a modern analysis is given of the device's operation. This paper presents a more satisfactory theory about the engineering aspects of the new generator than the 1991 IECEC paper.

Since the papers on Tesla's new type of electrical generator were published there have been a number of inquiries about his Notes on a Unipolar Dynamo article and the Carl Linde device for air liquefaction. The Tesla article and a book chapter on Linde's device have been reproduced here.

A Special Case of Voltage Gain is a technical note showing that the equation for voltage gain will have to be modified for a special coil that may be related to Tesla's fuelless energy generator design. A regular coil and one of Tesla's design are measured and compared. Measurements show that the Tesla design is over 900% better in voltage gain than predicted by calculation.

Underwater Communication System of Nikola Tesla was written originally in 1992 as part of an investigation into his method of submarine communication. Its starting point is an acceptance of Tesla's assertion that his wireless system worked without electromagnetic radiation and transmitted through the earth. Modern analysis of his wireless method, on the other hand, starts with the incorrect assumption that he was using the radio broadcast methods of today and, then, goes on to either disprove Tesla's claims, or tries to find some way of making Tesla's description of his transmission method fit today's technology. Variations on the earth/ionospheric cavity oscillation theory have peen popular in both of these efforts. This paper shows, however, that Tesla's work with electrostatics points to his use of displacement currents for through-the-earth transmission. Such a method is shown to be consistent with Tesla's claims and scientifically possible.

Tesla's Wireless Power Transmitter and the Tunguska Explosion of 1908 first appeared in a different form as a magazine article in 1990. Many references to the use of his wireless power transmission technology as a directed energy weapon system appear in Tesla's writings. The more the claims were investigated, the more his statements about a weapons application were discovered to correspond to both his personal circumstances and to public events. They pointed to the likelihood of his having made a test firing of his power transmitter as a directed energy weapon.

Tesla: Forgotten Genius, with Christopher Bird, is an overview of Tesla's work and that of “free energy” device inventors Alfred Hubbard, Lester Hendershot and T. Henery Moray. It appeared in New Age magazine in February 1977.