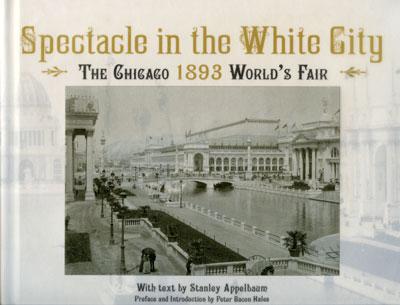 Spectacle in the White City: The Chicago 1893 World's Fair

The World's Columbian Exposition — also known as The Chicago World's Fair — was a World's Fair held in Chicago in 1893 to celebrate the 400th anniversary of Christopher Columbus's arrival in the New World. Chicago bested New York City, Washington, D.C. and St. Louis, Missouri, for the honor of hosting the fair. The fair had a profound effect on architecture, the arts, Chicago's self-image, and American industrial optimism. The Chicago Columbian Exposition was, in large part, designed by Daniel Burnham and Frederick Law Olmsted. It was the prototype of what Burnham and his colleagues thought a city should be. It was designed to follow Beaux Arts principles of design, namely, European Classical Architecture principles based on symmetry and balance.

The exposition covered more than 600 acres, featuring nearly 200 new buildings of classical architecture, canals and lagoons, and people and cultures from around the world. Over 27 million people (equivalent to about half the U.S. population) attended the exposition during its six-month run. Its scale and grandeur far exceeded the other world fairs, and it became a symbol of the emerging American Exceptionalism, much in the same way that the Great Exhibition became a symbol of the Victorian era United Kingdom.

A splendid tribute to the exposition's “White City” of shining Beaux-Arts buildings, this volume offers a grand photographic record, printed in duotone in a sweeping landscape format with gatefolds. Essays and captions by a noted historian offer a guided tour of this prelude to 20th-century America's artistic and industrial might.