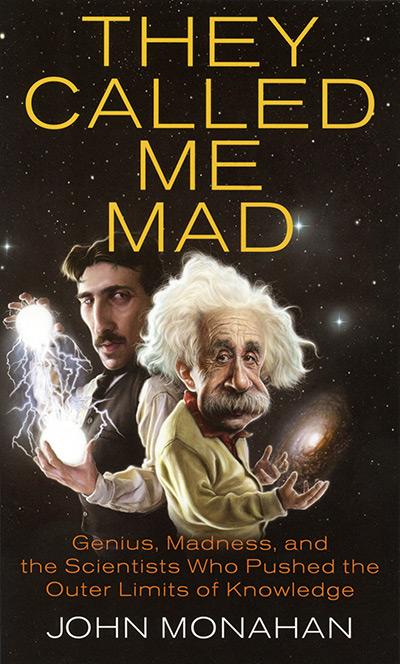 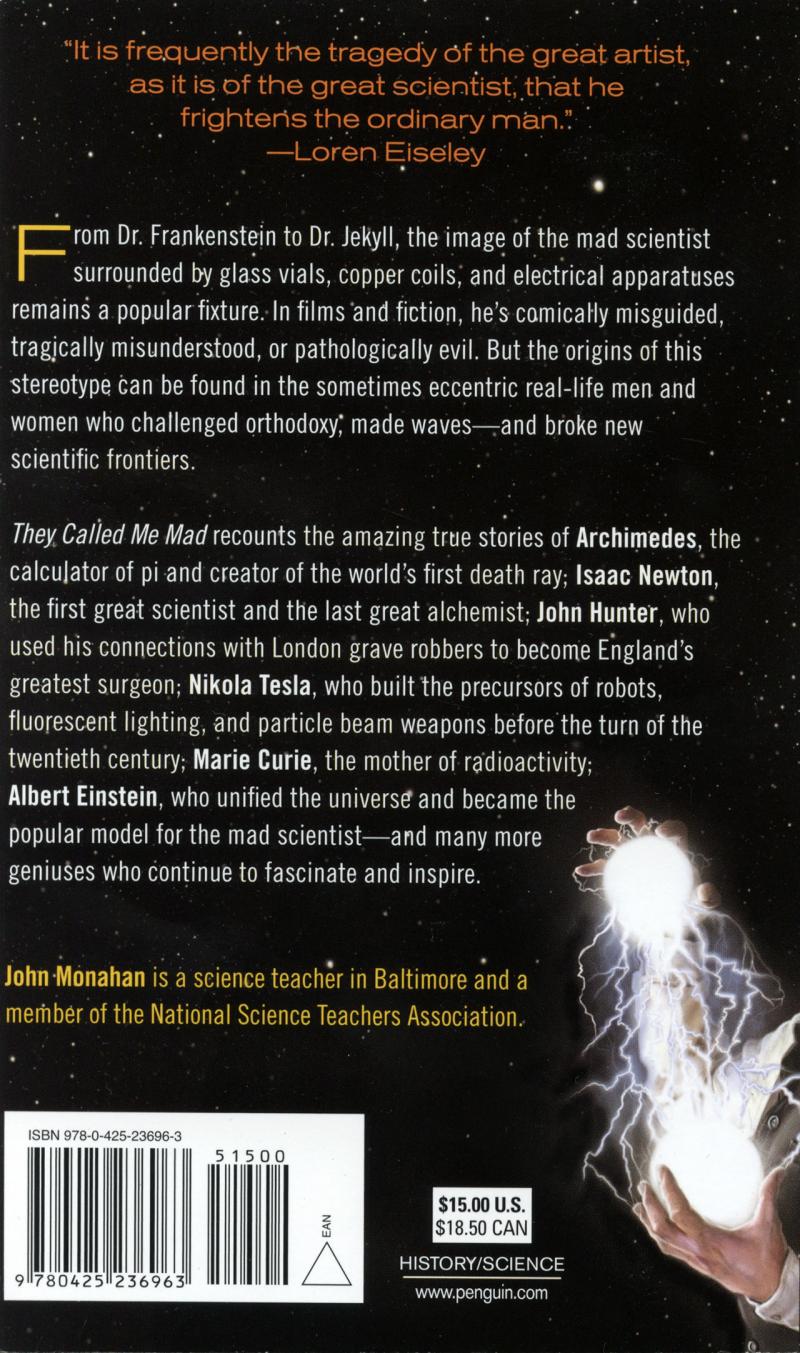 They Called Me Mad: Genius, Madness, and the Scientists Who Pushed the Outer Limits of Knowledge

“It is frequently the tragedy of the great artist, as it is of the great scientist, that he frightens the ordinary man.”
— Loren Eiseley

From Dr. Frankenstein to Dr. Jekyll, the image of the mad scientist surrounded by glass vials, copper coils, and electrical apparatuses remains a popular fixture. In films and fiction, he's comically misguided, tragically misunderstood, or pathologically evil. But the origins of this stereotype can be found in the sometimes eccentric real-life men and women who challenged orthodoxy, made waves — and broke new scientific frontiers.

They Called Me Mad recounts the amazing true stories of Archimedes, the calculator of pi and creator of the world's first death ray; Isaac Newton, the first great scientist and the last great alchemist; John Hunter, who used his connections with London grave robbers to become England's greatest surgeon; Nikola Tesla, who built the precursors of robots, fluorescent lighting, and particle beam weapons before the turn of the twentieth century; Marie Curie, the mother of radioactivity; Albert Einstein, who unified the universe and became the popular model for the mad scientist — and many more geniuses who continue to fascinate and inspire.

John Monahan is a science teacher in Baltimore and a member of the National Science Teachers Association.

Introduction - The Real Scientists Behind the Mad Scientist

Arcane electrical instruments crackle and hum next to bubbling glassware. The hunchbacked assistant checks the draped figure strapped to the operating table, and above it all, the genius in the long white lab coat laughs manically. These are familiar images, but where do they come from? Do real scientists spend their time constructing unstoppable giant robots, building death rays, and cloning dinosaurs? Generally speaking, no, but you might be surprised to learn that many of those mad scientists in movies and TV were inspired by actual scientists, real men and women who challenged the scientific orthodoxy and pushed the limits of intellectual frontiers.

Fictional mad scientists go back almost two hundred years. Mary Wollstonecraft Shelley created the prototype when she gave literary birth to Victor Frankenstein in her 1818 novel Frankenstein; or, The Modern Prometheus. While vacationing during the dreary summer of 1816, the eighteen-year-old Mary Wollstonecraft Godwin, and her future husband, Percy Bysshe Shelley, visited the villa of Lord Byron. Cooped up by the rainy weather, they passed the time by competing to see who could compose the scariest ghost story. Shelley and Byron soon gave up, but young Mary shocked them with a tale she later said came to her in a dream. It featured an arrogant genius, who meddled in matters humans were not meant to know. He blurred the line between life and death by animating a corpse and ultimately paid the price for his hubris.

Across the Atlantic, the American Nathaniel Hawthorne added his own tales to the mad scientists' pantheon not long afterward. “Dr. Heidegger's Experiment,” published in 1837, is the story of an eccentric physician who tries to find an elixir of rejuvenation. Hawthorne followed it in 1844 with “The Artist of the Beautiful,” about an obsessed artistlcraftsman who creates a clockwork simulacrum of a butterfly. The next year, he published “Rappaccini's Daughter,” about a doctor who performs bizarre botanical experiments upon his own daughter.

By the latter part of the nineteenth century, these characters would be joined by others of the scientific fraternity. Robert Louis Stevenson's The Strange Case of Dr. Jekyll and Mr. Hyde thrilled the reading public in 1886. Jules Verne gave us Captain Nemo four years later in Twenty Thousand Leagues under the Sea. Not to be outdone, H. G. Wells made his own contributions, giving the world both The Island of Doctor Moreau (1896) and The Invisible Man (1897). Each added to the mad science mystique.

If literature created the mad scientist, the movies made him a star. From the earliest days of film, the mad scientist provided his cautionary tale. In 1910 the Edison Studios first put Frankenstein before silent-movie goers. Although it was first, it was not the movie that catapulted the doctor's creation of cobbled together corpses into the public's collective unconscious; that was the 1931 version of Frankenstein. When Colin Clive looked up at the heavens and proclaimed, “It's alive!” the horror movie came into its own, and the mad scientist became an indispensable part of our culture.

Countless movie incarnations followed; Rotwang, Dr. Cyclops, Dr. Morbius, the Abominable Dr. Phibes. The list goes on. After World War II, cold war paranoia and fear of the atomic bomb gave rise to the sci-fi craze, and the laboratories of the mad scientists went into production on an industrial scale. Death rays and doomsday devices competed to distract us from the actual arms race and the mad rush toward nuclear Armageddon. As they proliferated on screen, the mad scientists passed from there to the pages of comic books and the nascent world of television.

Even today, the white lab coat and the promise of forbidden knowledge, and ultimate power retain their allure. Dr. Emmett Brown went Back to the Future. Dr. Totenkopf met Sky Captain and the World of Tomorrow. Dr. Cockroach introduced us to Monsters vs. Aliens, and those who dare can join in with Dr. Horrible's Sing-Along Blog.

With all of these countless images, from the tragic to the comic, the downright evil, and the merely misunderstood, it's easy to forget that behind every great legend there is a grain of truth. Many of the elements that we take for granted — the bubbling formulas, the sparking electrical coils, the glowing lasers, and the nuclear reactors — were and are used by real scientists. The fictional mad scientist wasn't created from whole cloth. He was inspired by actual researchers who challenged convention, nurtured by our ever-increasing knowledge and the greatness of our scientific achievements and given life by our fear of going too far, too fast and the ultimate price of progress.

Here we attempt to learn more about the real men and real women, who gave rise to the myth. They are not merely caricatures and stock characters. They were actual human beings, with all the strengths and weaknesses that entails. But their vision, their passion, their willingness to push beyond accepted boundaries, their determination in the face of opposition, and their creative genius helped forge the modern age we live in. Their stories are no less amazing than their discoveries. Here then, are the lives of the real mad scientists.