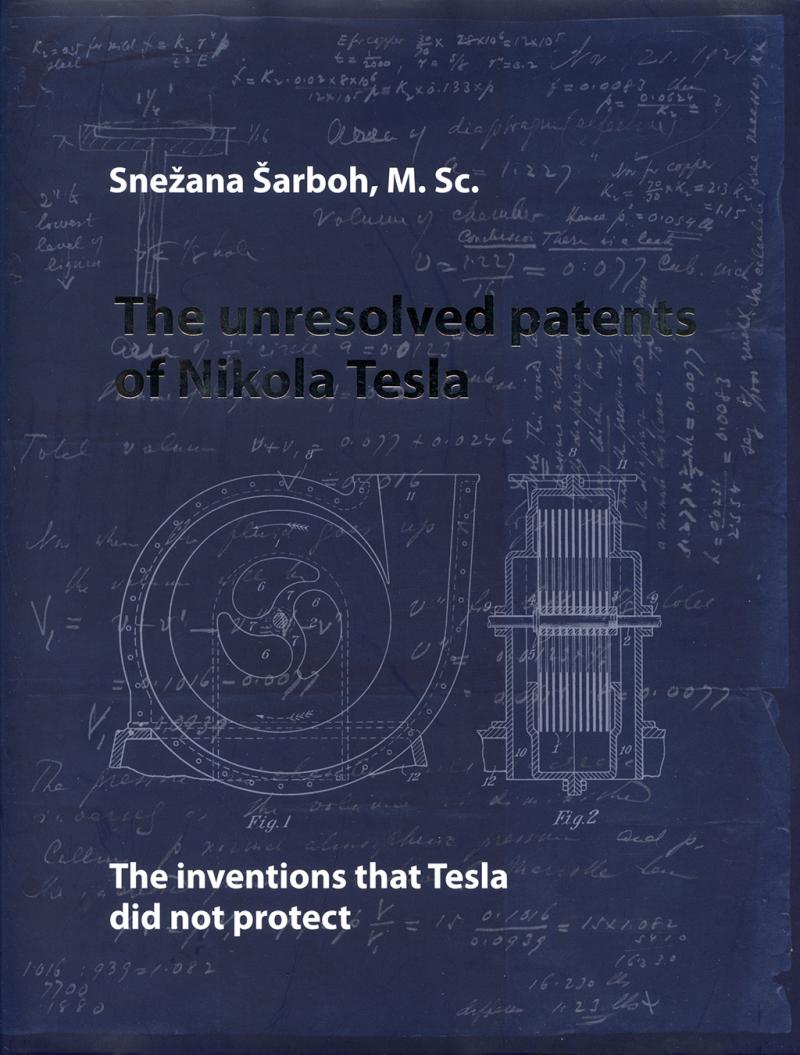 The Unresolved Patents of Nikola Tesla: The Inventions That Tesla Did Not Protect

The book “The Unresolved Patents of Nikola Tesla” is a logical successor to the work “The Patents of Nikola Tesla - Towards the Definite Catalog” by Snezana Sarboh M.Sc, published in 2006 by the Nikola Tesla Museum as two separate editions in Serbian and English. The publication's subtitle - Towards the Definite Catalog - clearly suggests the need for additional research of patent documentation, which would provide further insight into the lifetime's work of this ingenious scientist, engineer and inventor.

This new edition is a result of comprehensive expert research carried out by patent engineers Snezana Sarboh, M.Sc, and Siobodan Stojkovic. They carefully analyzed part of the extensive documentation from Tesla's personal archives, the contents of which was previously unknown to the public. The reason is simple: the material concerns inventions and patent applications for which Tesla did not receive patents in the US or elsewhere, prepared patent applications that Tesla never submitted, and even approved patents for which he failed to pay the required fees for any reason, and thus failed to obtain patent rights.

Patent offices around the world carefully preserve all approved patent applications, but they are not obliged to keep in their archives the applications that were not approved for any reason. As such, the archive materials presented here are the exclusive property of the Nikola Tesla Museum in Belgrade and most of them are being published here for the first time.

Future researchers will encounter numerous challenges offered by this content-rich and analytically processed material. The real value of this edition is undoubtedly in more than 200 published original documents. Among them are Tesla's patent claims with invention descriptions, sketches and drawings; his handwritten draft responses to the US Patent Office examination results pertaining to individual inventions, letters from Tesla's patent attorneys, examination results rejecting his patent applications, information letters on patent grant, and many other documents from this extremely interesting, but largely unknown, segment of Tesla's legacy.

Method of and Apparatus for Generating Electric Currents, Apparatus for Increasing Traction of Car Wheels, Electrical Meters, Electric Lighting Devices, Armatures for Alternating Current Motors, Reciprocating Engines, Method of Removing Gaseous Matter from Closed Receptacles, Industrial Utilization of Water for Heating Purposes, Art of Transmitting Electrical Energy Through the Natural Media, System of Wireless Transmission, Construction of Steam and Gas Turbines, Method of and Apparatus for Thermo-Dynamic Transformation of Energy, Method of and Apparatus for Economic Transformation of the Energy of Steam by Turbines, Fluid Gauge, Method or System for the Transmission of Electrical Energy without the Employment of Metallic Line Conductors - these are the titles of just some of Tesla's unresolved patents presented in this book. They provide fresh confirmation of his limitless inventiveness and the extremely broad scope of research fields he operated in, which has already been largely established through the value of his published works and realized inventions and patents.

As it could have been expected, most of these patents belong to the fields of electrical engineering or machine engineering - fields in which Tesla achieved his great discoveries and inventions. With this in mind, a special surprise for even the most informed experts of Nikola Tesla's body of work will be the fact unknown to date, that he was also attempting to protect inventions in the field of processing technologies.

Among the technical collections of the Nikola Tesla Museum, a special collection is dedicated to the field of processing technologies. The seriousness of Tesla's interest in this field is indicated by the samples of metals, various pigments and powders, metal melting vessels and other objects contained in this collection, as well as numerous books and catalogues from the field of metallurgy, chemistry and processing technologies processes. His two patent applications covering the process and the apparatus for treating and transporting sulfur show that Tesla had serious intentions with these inventions during the 1920s. Although the examination procedure for these two patent applications took considerable time, developments led in a direction favorable for Tesla. Indeed, three years after the first patent application and a number of examination results, the US Patent Office requested only minor corrections to the expert terminology used in the patent application Process of Treating and Transporting Sulfur, which would be followed by patent grant. For the Apparatus for Treating and Transporting Sulfur, Tesla received information on patent grant on June 25, 1926, and was required to pay a fee of 20 USD within six months to cover the issuing of the patent document. However, in both cases Tesla took no further steps and, following expiry of the six-month deadline, his applications were considered to be withdrawn.

Particular interest will also be drawn by the parts of this unique book detailing researchers' results of investigating the reasons why certain Tesla's patents were rejected in some European countries.

Although the book Unresolved Patents of Nikola Tesla sheds new light on Tesla's work, it does not bring finality. Principally, it is possible that further patent applications will be discovered, in addition to those present in Tesla's personal legacy. Moreover, the Tesla Museum contains further comprehensive material worthy of special research. Namely, Tesla also had inventions that he never submitted or prepared patent applications for, but which are also presented in detail on technical drawings preserved at the Nikola Tesla Museum. A good example would be Tesla's ventilator. There is no other document pertaining to this original Tesla machine engineering solution, save for a precise technical drawing. Nevertheless, this was sufficient to make a full working model of this invention, which is today part of the permanent exhibition at the Nikola
Tesla Museum in Belgrade.

Further research of Tesla's personal legacy is surely to come. It represents a debt to an authentic genius and his groundbreaking work that ceaselessly manages to arouse huge interest and inspire new research projects.