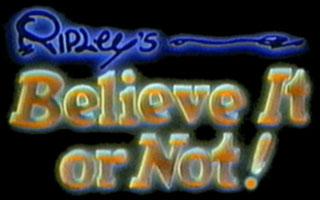 Ripley's Believe It or Not - Nikola Tesla

Ripley's Believe It or Not produced one of the earliest documentary style segments on Nikola Tesla for the ABC TV series starring Jack Palance. Tesla Universe founder Cameron Prince was watching when this show originally aired and this was the spark that ignited his life-long passion for Nikola Tesla. You can see this segment in the Tesla Universe Video Library.